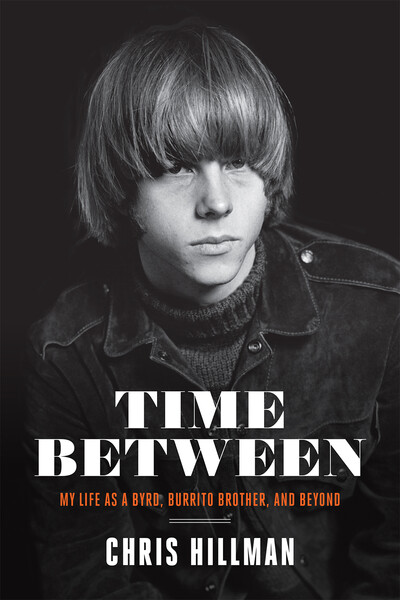 Click Above To Order Your Copy Directly From Chris“One hundred years from this time
Would anybody change their minds
And find out one thing or two about life?
But people are always talking
You know they're always talking
Everybody's so wrong
That I know it's gonna work out fine . . .”

From The Byrds’ “One Hundred Years From Now”

Recently, I finished reading the phenomenal Chris Hillman autobiography, “Time Between”. I was so impressed with the tome – and so many thoughts were provoked by it – that, honestly, I just wanted to impart a small bit of what I’ve gleaned from those provoked thoughts.

For those who don’t know who Chris is, he is a legendary singer/songwriter/inductee into the Rock and Roll Hall of Fame. He was an original member of the five-piece version of The Byrds. He went on to other history making groups such as The Flying Burrito Brothers, Manassas, Souther-Hillman-Furay, The Desert Rose Band, and a ton of other acts, artists, and solo work. But it was the Byrds that have entrenched Hillman and his former bandmates Roger McGuinn, David Crosby, Gene Clark, and Michael Clarke firmly into the soundtrack of American music; into the soundtrack of our youth; into the music of the ages.

As I read the “Time Between”, I was struck by how things – good and bad – seemed to happen in Chris’s life for a reason. That thought wasn’t, in and of itself, isn’t new to me. I’ve always felt that way about the various events in my life. Afterall, as the late great Andre Crouch wrote in his classic gospel song, “Through It All”: “If I never had a problem, how could I know that God could solve them?”

But that’s another thought for another article.

Here’s what I wonder – and I’ll preface the question by piggybacking off the foundational lyrics used above for this article by quoting a former pastor of mine, Gerald Johnson: “A thousand years from now, none of this is going to matter.”

Dovetail that thought with the title of Chris’s book (which is also the title of one of the songs he wrote during his tenure with The Byrds). That title is to a love song, but it also reminds me of the famous poem, “The Dash Between”, which is about how we live our lives between birth and death (and represented by the dates commonly shown on tombstones).

Hillman is in his seventies now. A life well lived. A lot of hurdles jumped. A lot of highs and lows. And, God willing, a lot more life to live. His book reflects what has and has not mattered during his time in between. The wise who read “Time Between” will do well to undertake their own similar introspection in order to assure that their course is true as we all edge ever closer to the date on the right side of our own tombstones.

What have we learned from our mistakes?

What’s still on our bucket lists to do?

Is all well between our Maker and ourselves?

What is still left undone that we can still do?

What fences need to be mended?

Forgiveness’ begged or given?

What dust of others needs to be shaken off of our shoes?

Even more importantly, what are we taking so doggone seriously that, one hundred years from now, won’t even mattered, let alone be remembered?

Politics? Politicians? Hardly. History will prove most of them horribly flawed people whose mark is merely a blemish on the butt of humanity . . . at best.

Fighting over this issue or that? Some may be life or death issues but, when it comes down to it, we need to focus on how we build bonds, not fences, between us and those we relate to, interact with, to grow with. We’ve got to come to the realization that the odds are quite high that whatever it is that we think we’re 100% correct about a matter, that we’re entirely wrong. Even “science” has proven such a thing about itself over history. Doesn’t it stand to reason that us mere mortals – especially politicians and pundits – would be even more susceptible to errors in thinking?

Now’s the time to address such things. The final date on our tombstones will eventually be hammered into that stone. Now is the time to true our courses. Now is the time to forgive, forget, love, heal, and believe. Because, one hundred years from now, that’s the only thing that’s really going to matter and be remembered.