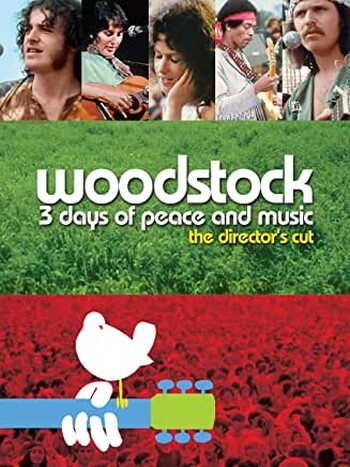 Click Above To Rent A Viewing Of the Iconic Event“. . . We are stardust, we are golden, we are caught in the devil’s bargain, and we got to get ourselves back to the garden . . .”
From Crosby, Stills, Nash, and Young’s “Woodstock”

Michael Lang died today. He was 77.

Michael was the co-creator of the legendary music festival, Woodstock, that took place on Max Yasgur’s dairy farm, New York, in 1969.

I know some folks who were there . . . as far as they think they remember.

While there had been a lot of outdoor festivals before and since, Michael and his co-creator/partner, Artie Kornfeld, made history. There was just something different about Woodstock and what all it represented.

The U.S. was at war and that generation of youth – the big brothers and sisters to my fellow team of baby boomers – were wanting peace, love, and a cosmic harmony that they hoped would be accomplished by coming together and grooving to some of the most popular music of the day.

I’ve watched the movie a few times and, as I’ve already said, I talked to some of those who attended and some who performed there. The impact on them as individuals was remarkable and lasting. As with many great events, many attempts were made to surpass that event on all levels. While there were larger festivals, Woodstock was just different. I think it was largely because of the spirit of Michael and Artie. Some say it all ended at Altamont.

There are many other people infinitely more qualified than I am to offer their analysis about Woodstock and what happened in the years since. I think that it’s like anything else in life: idealism usually clashes with reality.

In the years since we certainly haven’t ended wars. I’d dare say that they have increased, become more diabolical and senseless. There are more guns than plowshares. There are more maimed and dead from war. There are more profits for the military suppliers, more technology developed to make war more (I can’t believe people have said this) “humane”, and more debt incurred by governments to pay for those wars and “conflicts.”

What remains is we still wish for peace and love. Heck, we’re still waiting to give peace a chance. We want to be in harmony with each other. Some want to be in harmony with the earth. From what I have witnessed, people still hope that they are still endowed by their Creator with certain unalienable Rights, that among them are life, liberty, and the pursuit of happiness.

While I don’t think that Michael and Artie quite had the Constitution in mind when they put together the Woodstock festival, it sure appears to me that that’s what they were shooting for . . . they just expressed it differently.