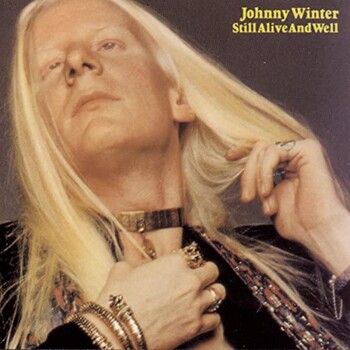 I originally wrote this piece 12 ½ years ago, right after meeting Johnny face to face. I had interviewed him for the second time just prior to that meeting. Sadly, we lost Johnny almost 5 ½ years later. However, his story is still an inspiration to anyone who are fighting battles similar to those that he fought. Please read this. Be encouraged. If you’re not already seeking help, please do so.

On February 1st I was privileged to see the great Johnny Winter in concert for the second time. What made this show especially meaningful and special to me was being able to meet him in person instead of just speaking with him on the phone.
The meeting was made possible by Johnny’s manager, Paul Nelson, who took me back to their tour rig where Winter and the rest of the band (Scott Spray and Vito Liuzzi) were hanging out before they hit the stage. The atmosphere was especially jovial because one of Johnny’s old friends, sax man Jon Smith, was there for a visit.

I just stood back and observed the activity around me. Spray and Smith were visiting while Vito snapped a picture of them together. Other friends were chatting it up with Johnny while Paul was taking care of last-minute business. Some contest winners were brought through to meet Winter and to snag autographs.

What I found particularly moving was when Johnny was told that there was a fan at the door who couldn’t make it into the rig.Winter got up, made his way to the door, and stepped out to meet his long-time fan who was confined to a wheelchair. The look on that fan’s face was priceless.

After Johnny shook the man’s hand and signed an autograph, he made his way back to his seat on the bus. Shortly afterward, I was able to sit across from him and ask if he would mind signing a couple of my records. I thanked him again for granting me the interview the week before (here). The years and battles do show on this legends face but there’s a kindness and healthiness that show as well.

I didn’t take much of his time. After all, what could I say that he hasn’t already heard? As I thanked the blues legend for signing my albums and, again, for the interview and told him that I am so glad to see him healthy. He thanked me as I stood up.
After thanking Paul for making the meeting happen and saying goodbye to the rest of the band, I left the bus and made my way to an area where I could sit quietly and reflect on my meeting. I was struck by how, after all the years of abuse and hard-living, Johnny Winter made a conscious decision to change – to rid himself once and for all of the chemical and liquid demons that plagued him for so many years.

I do know that Johnny Winter will celebrate his 68th birthday on the 23rd of this month. He’s still alive and well and making people happy with his music. If he can overcome his demons at this stage of his life, so can you or anyone else who is fighting those battles.

You can do it.