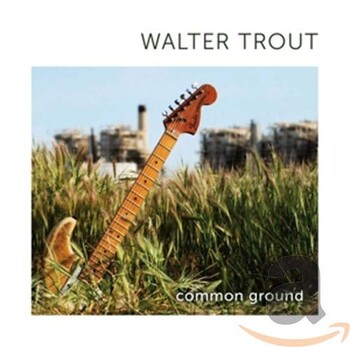 Click Above To Order Your CopyI originally posted the piece, below, eleven years ago. It’s based on a line from an incredible song by an amazing, iconic blues hero, Walter Trout. I’ve had the privilege of interviewing Walter four times (here, here, here, and here) and one thing I do know about the man, his heart is as huge as his gargantuan musical and songwriting talent. I think that is especially evident in this song – and this line from it.

“ . . . If there’s a place where the truth can still be found, Lord, lead us to the Common Ground . . .”
From Common Ground by Walter Trout

Regardless of which news channel you get your news from, it doesn’t take long to hear some sort of coverage of some sort of conflict somewhere in this world. Whether it’s between countries, political parties, races, religions, or various ideologies, people seem to be always at war with each other.

As a kid growing up in church, I often heard preachers and teachers quoting Scriptures that foretold “wars and rumors  of wars”. The rumors are, obviously, true. Mankind is always at war with itself and appears to be in no mood to accept anything other than total victory. How does one have total victory over oneself, I’m not exactly sure but that’s the view of the world from my little corner of it.

Every workday, I’m involved in negotiations of some sort. Whether it involves transactions involving large sums of money or interviews with icons and influencers who I admire, desired outcomes, or common ground, must be determined and defined for discussions and negotiations to be successful. Some call it win/win. I suppose that’s true and is how I prefer to conduct business in pretty much every area of my life.

As I watch world news, I must admit that I do get concerned about the position of some who believe that victory must be predicated on the defeat, if not outright destruction, of others. How can countries, political parties, activists, or religions ever hope to achieve a win/win resolution if, at their core, their intent is to annihilate their opponents, real or perceived?

I believe the common ground that must be established in virtually every serious situation in the world today should be a loving and pure attitude in each individual heart. Hate, hypocrisy and ruthlessness are rooted in the core of the perpetrator’s heart and must be eradicated for there to be true peace, love and harmony. Surely, a hater can be turned into a lover of their fellow human and build positive outcomes and futures on common ground, can’t they?

Is mankind capable of such a feat? I think so but only by the guidance and grace of God . . . and finding common ground.