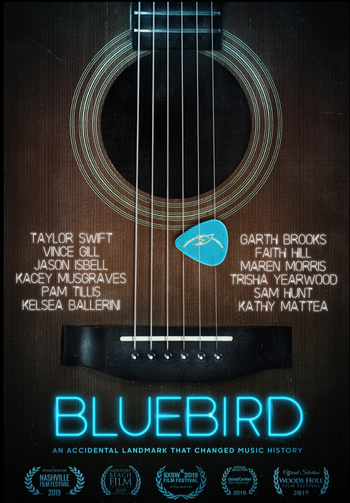 Click Above To Order Your Copy From The Bluebird Cafe“Long, long time ago, I can still remember, How that music used to make me smile . . .”
From “American Pie,” by Don McLean

I wasn’t really intending to write a Part Two to my American Pie piece. I guess it’s because I have several “Part One’s” on here and haven’t yet written any Part Two’s yet.

That is, not until now.

As I write this, I’m watching my DVD copy of, Bluebird. It’s an amazing, well-produced documentary about the historic Bluebird Café in Nashville, Tennessee.

The Bluebird Café is a little hole-in-the-wall joint that opened in 1982. It is the location where musical history has been made and the stuff that music career dreams are made of. The big draw to the small, 90-seat café is the Writer’s Nights that take place there.

Writer’s Nights are when aspiring and up-and-coming songwriters come to showcase their own songs. Often, the night is capped off with an appearance by a songwriter who has enjoyed their own success in writing songs.

Occasionally, there are also Songwriter Circles wherein three or four successful songwriters appear – in a circle, of course – surrounded by patrons. Each writer takes turns telling the stories behind their songs and then performing them. You will hear the songs sung from the heart that bore and wrote them. Though you’ll immediately recognize the song, it will take on all new meaning because you’ll hear it from the heart that wrote it.

I attended several songwriter circles but only one at the iconic Bluebird Cafe. My friend, renowned country songwriter, Rafe Van Hoy, and three of his fellow successful songwriter friends appeared with him. It was so much fun and incredibly enlightening to hear the stories behind songs like Tammy Wynette’s and George Jones’ “Golden Ring” or Michael Martin Murphy’s “What’s Forever For.”

In the crowd that night – and on the documentary that I’m watching, something struck me as I watched the crowds: they were smiling.

They were smiling hearing the stories behind the songs.

They were smiling because of the memories that they conjured.

Perhaps they were smiling because they were hearing a classic for the first time.

They were smiling getting to see a surprise guest appearance by one of their all-time favorite artists.

One thing is for sure, they were smiling because of the music, plain and simple.

As I admonished last week, I challenge you to enjoy music once again. I mean really, truly enjoy music as you did in the very beginning. When the classics were new and fresh to you. When the newly discovered music opened a whole new world for you.

Go to local venues and enjoy the local cover bands (and tip them!).

Find out if there are Writer’s nights near you and go hear songs that very well could be hits that you will later hear on the radio or wherever you listen to music.

Watch the programs that will turn you on to new music or tell you about the stories behind the old ones you enjoyed as a teen.

When you do so, let the music make you smile, again.