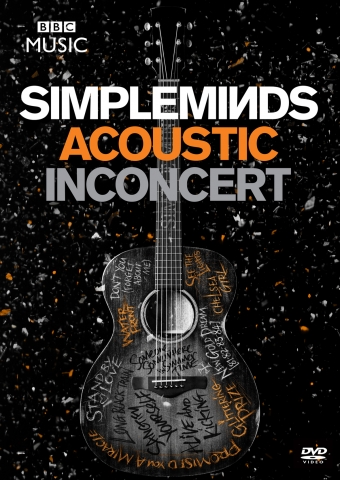 Eagle Rock Entertainment has released Acoustic In Concert by Simple Minds on DVD + CD. This wonderful collection of re-tooled classics follows the release of last year’s acclaimed Acoustic album and includes: “Alive And Kicking”, “Don’t You (Forget About Me)”, “Glittering Prize”, “Waterfront”, “Promised You A Miracle”, “Sanctify Yourself”, “See The Lights”, and more.

On the eve of the album’s release, in November 2016, Simple Minds took to the stage of London’s famous Hackney Empire to perform a special show for BBC Radio 2’s renowned “In Concert” series. The band performed re-imagined acoustic versions of some their greatest hits and best-loved tracks along with cover versions of some of the songs that influenced them including a stunning finale of “Make Me Smile (Come Up And See Me)” which sees them joined by Steve Harley. This is Simple Minds as you’ve never seen them before!

Simple Minds prove once again that they are a class act, with hit after hit given a fresh twist that allows them room to breathe and the melodies to shine through. Acoustic In Concert is a must for any fan of this remarkable band.

8) Someone Somewhere In Summertime

11) Promised You A Miracle