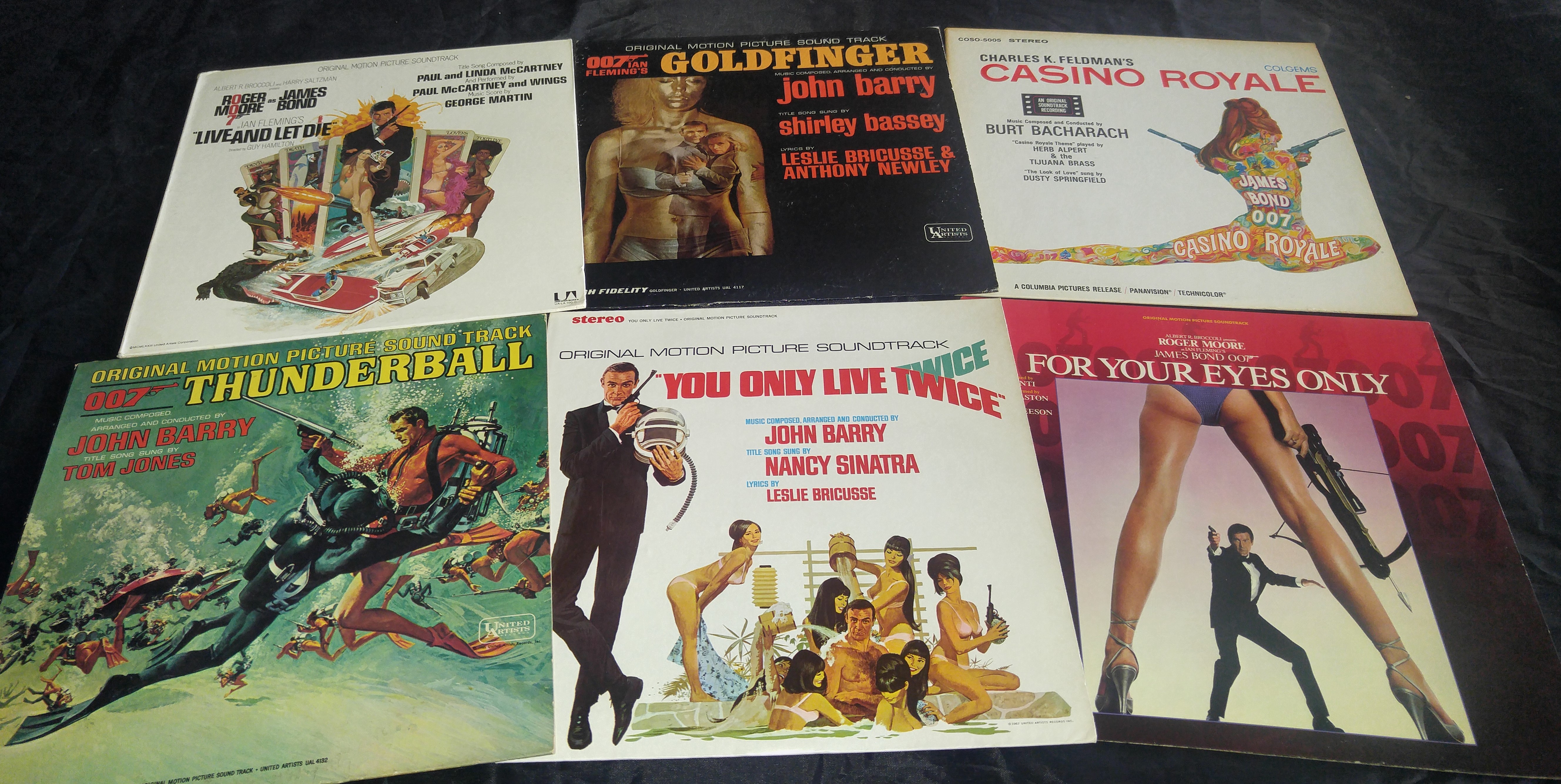 ere are a lot of James Bond fans out “there”, but I haven’t met a lot of folks who ran out after each movie and bought the soundtracks to the Bond movies. Other than a sometimes memorable theme song, let’s face it, most of the other music is intended for background music to set the tone for whatever scene is playing out – a love scene, suspense scene, etc. I can’t really see many folks sitting through even one side of a soundtrack album, trying to figure out which scene was occurring when a certain background song was playing. But that’s me. I know there are a lot of soundtrack collectors out there. In a way, I am one of them, but as I have noted in prior articles, I collect for the jacket art. So if I see great jacket art, I will buy it whether I saw the movie and whether I liked the movie or not if I saw it.

Although I noted above that a Bond movie theme song might generate some listener interest, I can’t find where any Bond theme has charted higher than #2, with Duran Duran’s A View to a Kill and Adele’s Skyfall both reaching that position. Madonna’s Die Another Day reached #3. Shirley Bassey’s Goldfinger only reached #21, if you can believe that, and many other Bond theme songs failed to reach the Top 10. It’s sad to think that artists such as Sheena Easton, Paul McCartney and Wings, Herb Alpert & the Tijuana Brass, Tom Jones, and Nancy Sinatra weren’t enough to catapult a theme song at least into the Top 10, but that’s just the way it was. So imagine all those other soundtrack songs you get from a Bond movie soundtrack, and how unmemorable that music must be.

But from an artistic standpoint (art broadly interpreted to include some great cheesecake covers), there are many Bond movie soundtracks that are worth obtaining, among them Goldfinger, Thunderball, Casino Royale, You Only Live Twice, Live and Let  Die, and For Your Eyes Only, to name just a few. And like any records collected for the art’s sake, you might buy these albums even if you are not interested in James Bond at all.

Which brings me to another category – the many albums appealing to Bond music fans that have music by other “artists”, and I use that term loosely, unless you are already a fan of such groups as The Cheltenham Orchestra and Chorus, Ray Martin and His Orchestra, The James Bond Sextet, The Roland Shaw Orchestra, the Zero Zero Seven Band, and a host of others. I’m not trying to slight these bands, but some of them appear to have been formed just to cut a reduced cost album for a lesser record label.

With so many knock-off albums featuring Bond music, am I underestimating the popularity of Bond movie soundtrack albums? I doubt it. I perhaps am underestimating the ability of an album’s enticing or sexy artwork to spur album sales.  Here are some Bond-related albums I have picked up over the years: 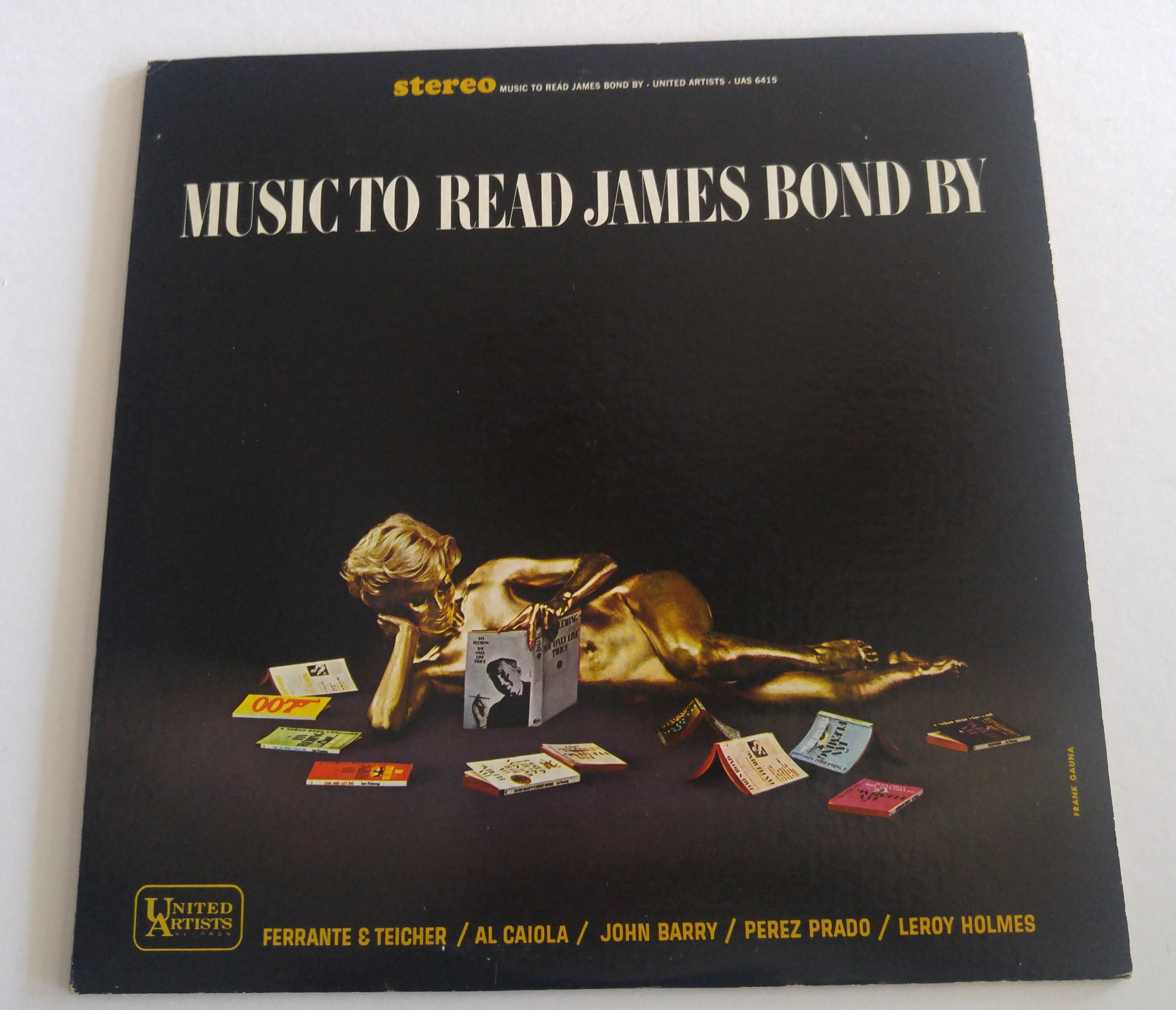 Music to Read James Bond By (United Artists)- What a great take-off of Goldfinger, featuring a naked gold-painted woman reading a Bond novel! You might say a novel idea! Just don’t say it around anyone close enough to hit you. This album appears to feature some actual tunes from the movies performed by the original artists. 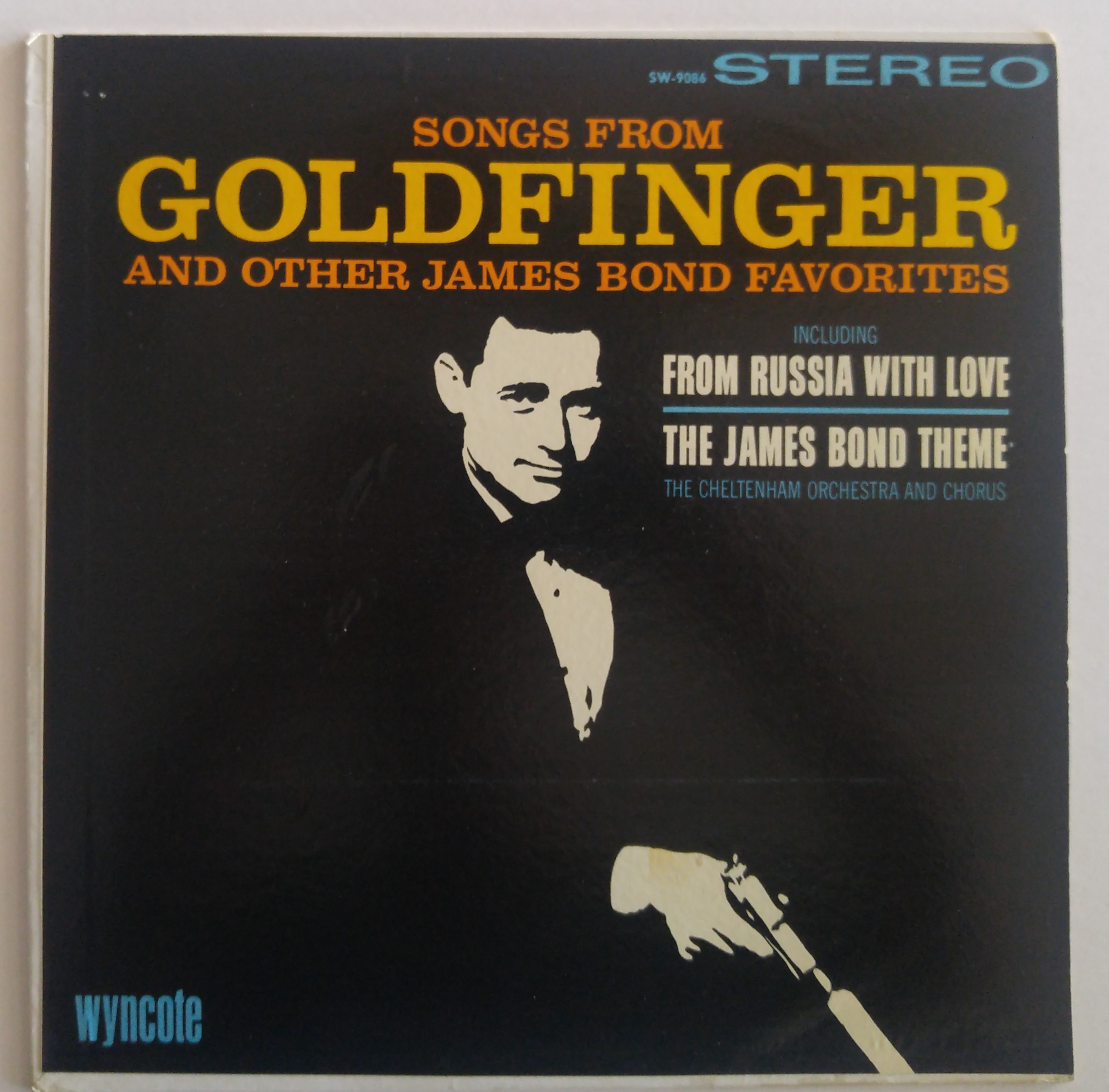 Songs From Goldfinger and Other James Bond Favorites (Wyncote)– with music by The Cheltenham Orchestra and Chorus; I like the black and white artwork on this album – simple but effectively capturing the Bond mystique. 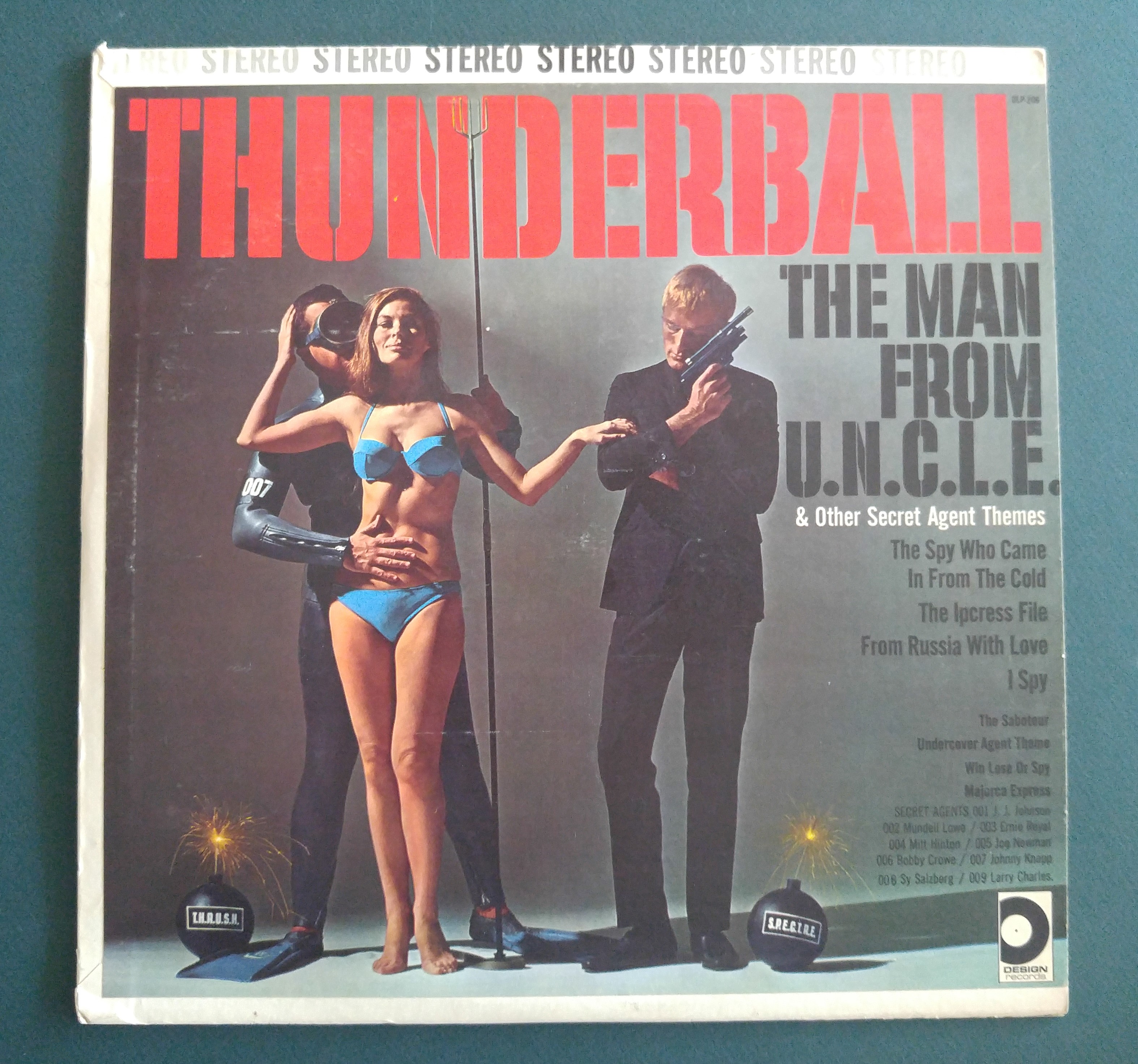 Thunderball, The Man From UNCLE & Other Secret Agent Themes (Design Records)– with music by The Jazz All-Stars; here’s a record appealing to an even broader spectrum of secret agent fans. The jacket liner notes talk about the “ready availability of quality low-cost recordings of familiar favorites by outstanding popular, Broadway, semi-classical and classical artists” which of course could be found on the Design label. I don't know which category into which The Jazz All-Stars fall.  I particularly like the two lit bombs at the feet of the pseudo Bond and pseudo Man From UNCLE (either Napoleon Solo or Illya Kuryakin, take your pick) with the villain’s organizational names on them (THRUSH and SPECTRE). Nice touch! 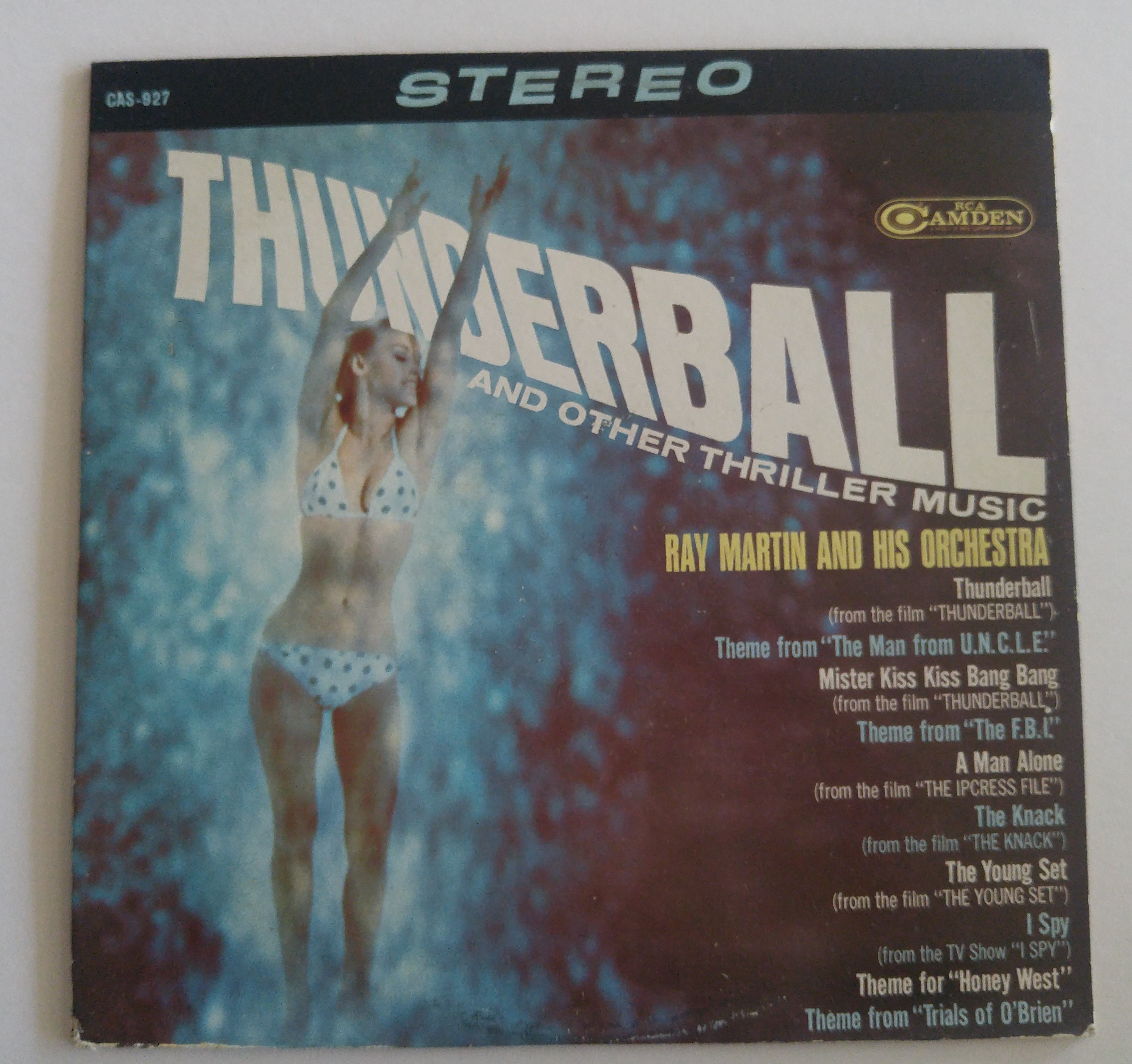 Thunderball and Other Thriller Music (RCA Camden)– by Ray Martin and His Orchestra; Thunderball appears to be a favorite title for Bond music albums, as it opens the door for bikini clad females for the album artwork.  I can’t say I like every album jacket featuring a bikini clad woman, but that’s only because I don’t want to look like a pervert. 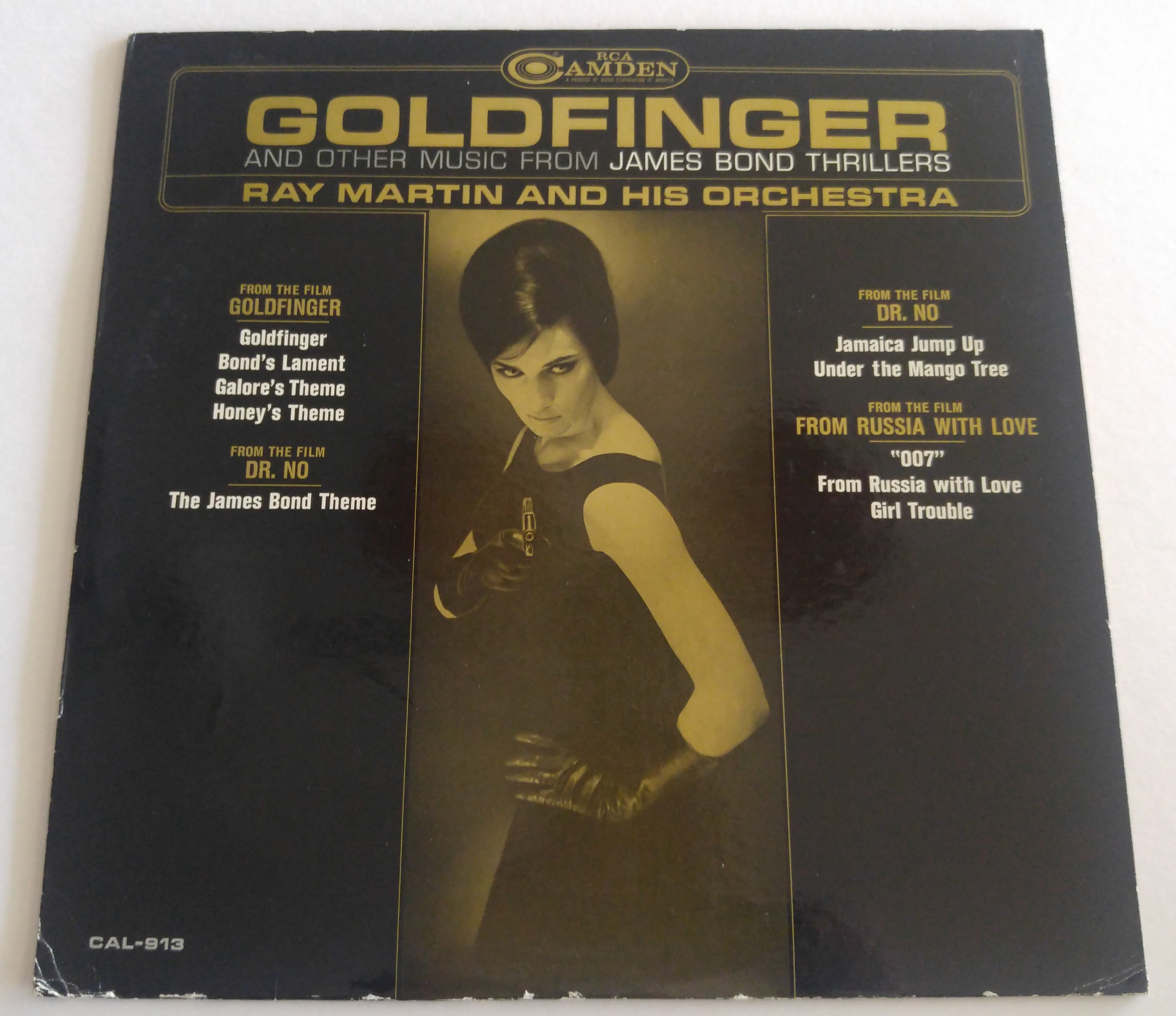 Goldfinger and Other Music From James Bond Thrillers (RCA Camden) – another album by Ray Martin and His Orchestra, featuring a nice sexy villainess holding a gun. 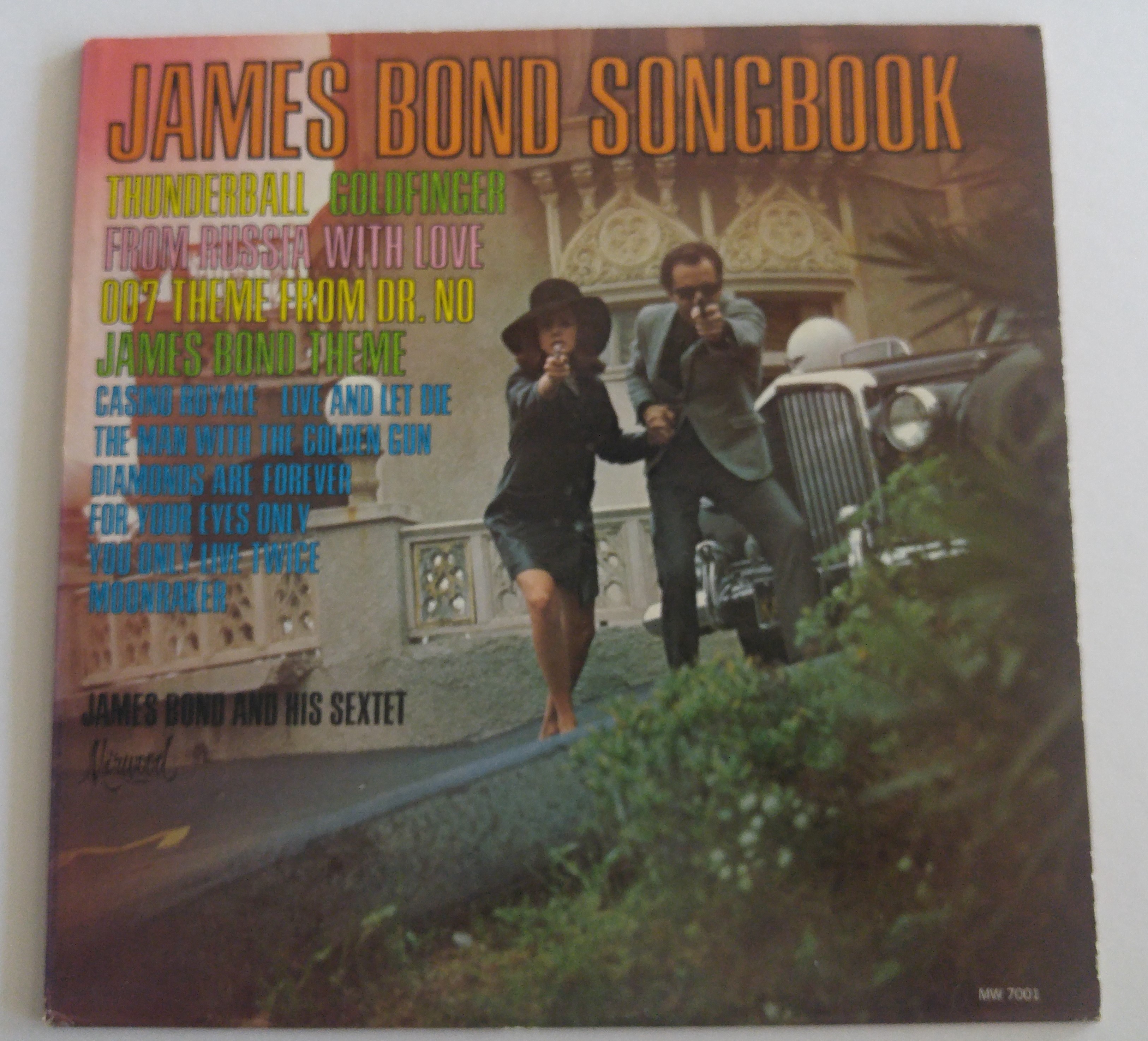 James Bond Songbook (Mirwood Records) – with music by James Bond and His Sextet. The music is performed by Jimmy Bond, a “well-known California-based bassist”, according to the liner notes.  Of course you must have heard of him, right? 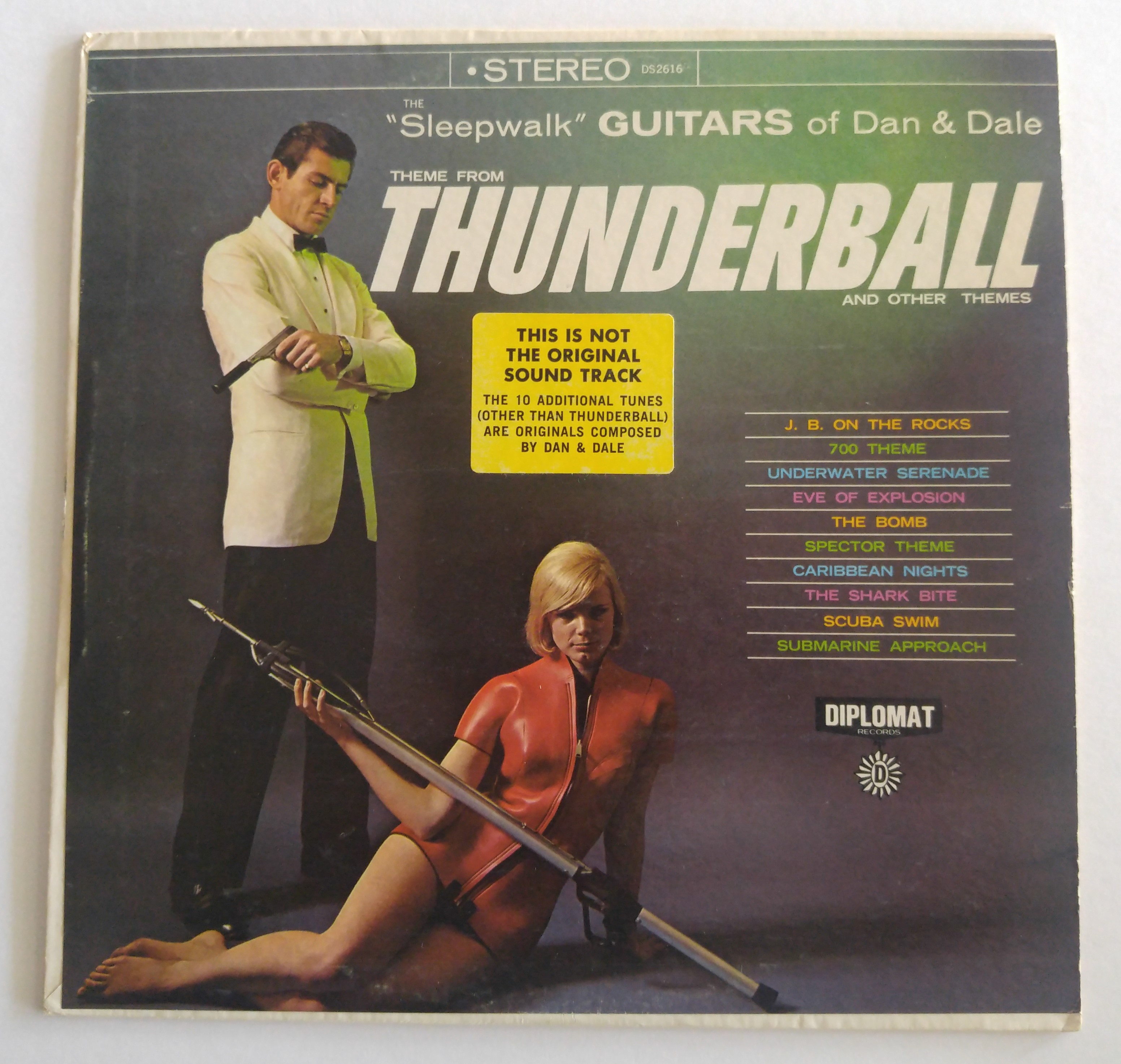 Theme From Thunderball & Other Themes (Diplomat Records) – Featuring the “Sleepwalk” guitars of Dan & Dale. As an afterthought, the record company slapped on a sticker noting that “THIS IS NOT THE ORIGINAL SOUNDTRACK”, noting that other than Thunderball, the other tunes are originals composed by Dan & Dale. 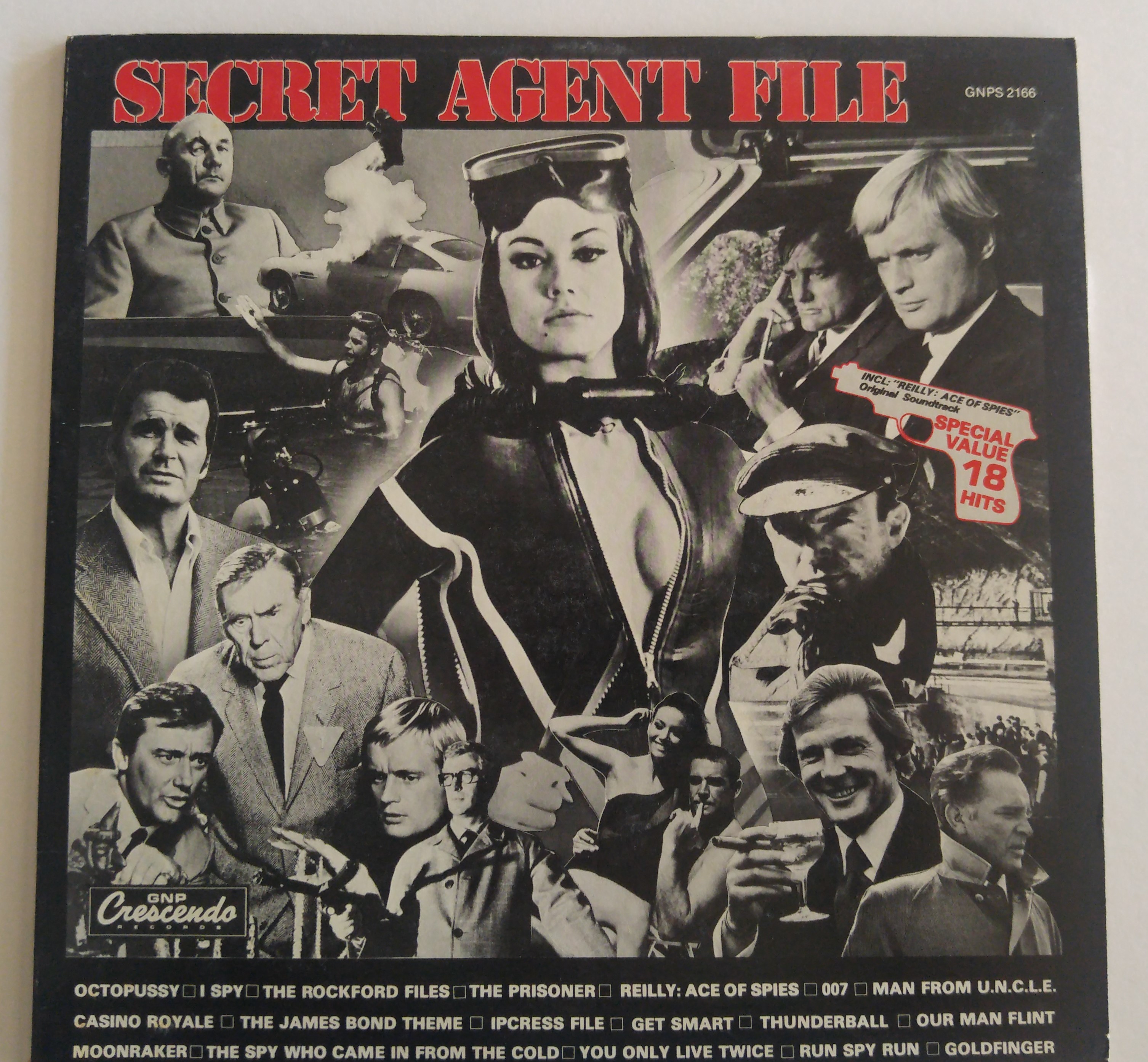 Secret Agent File (GNP/Crescendo Music Co.) – A 1984 record with tunes from Bond movies and a variety of other secret agent shows and movies, arranged by Billy Strange, Neil Norman, and others; a nice collage as jacket art. 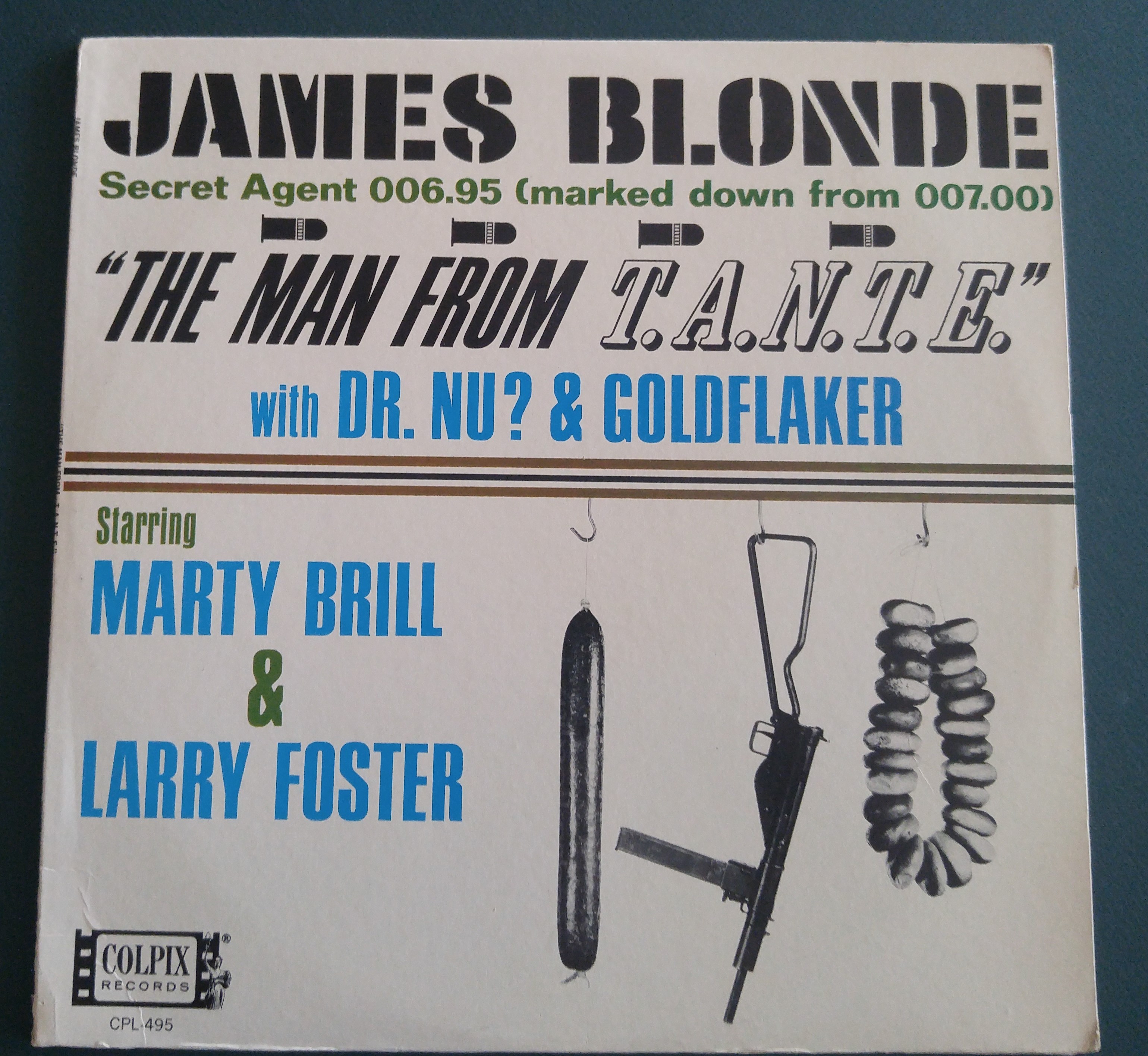 James Blonde Secret Agent 006.95 (marked down from 007.00) (Colpix Records) – This is an odd one – a comedy album featuring Marty Brill and Larry Foster. If you have any doubt that comedy changes over time, then locate and listento this album. But if you already know that, then you won’t want to waste your time listening to this one. 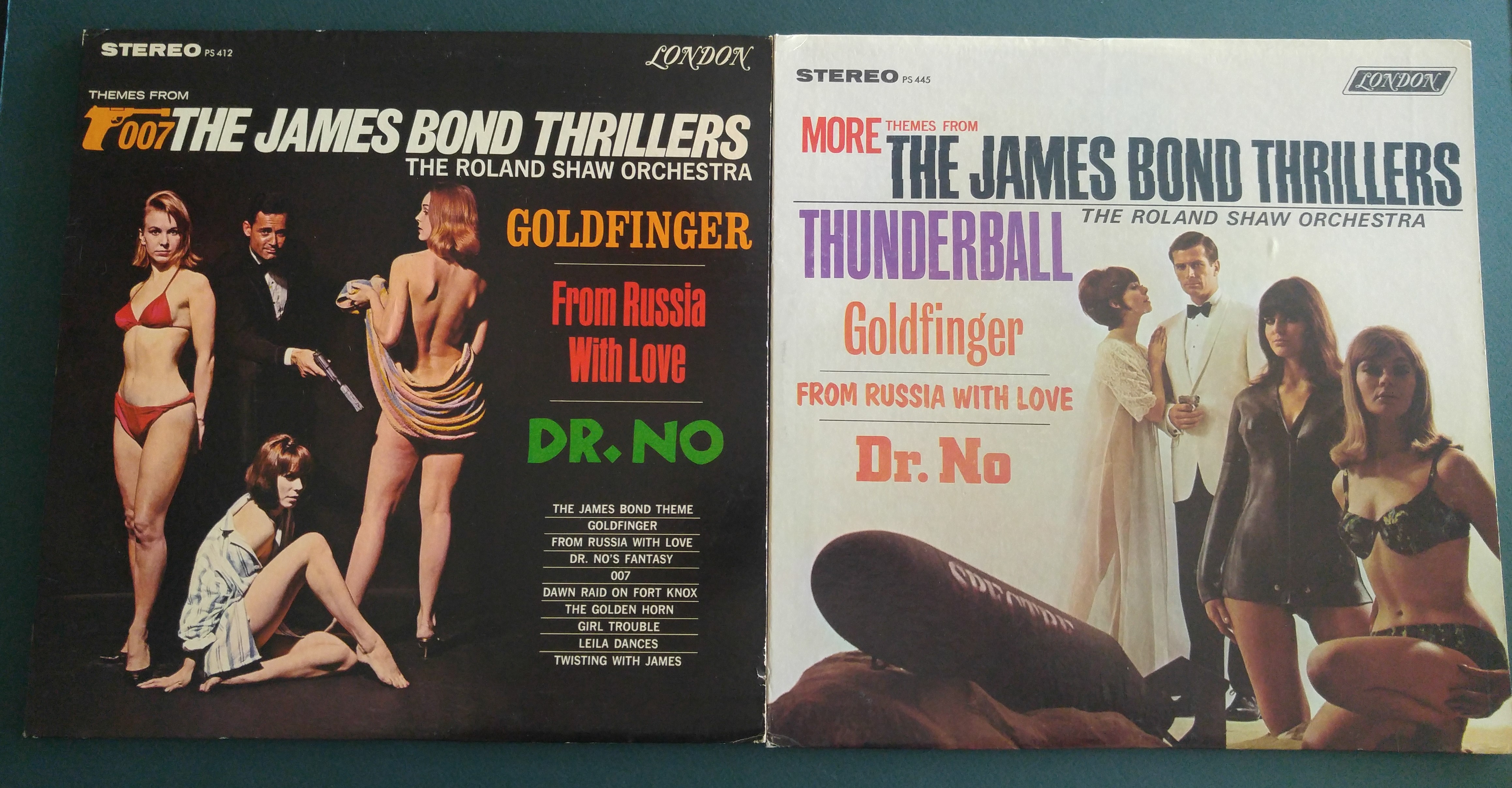 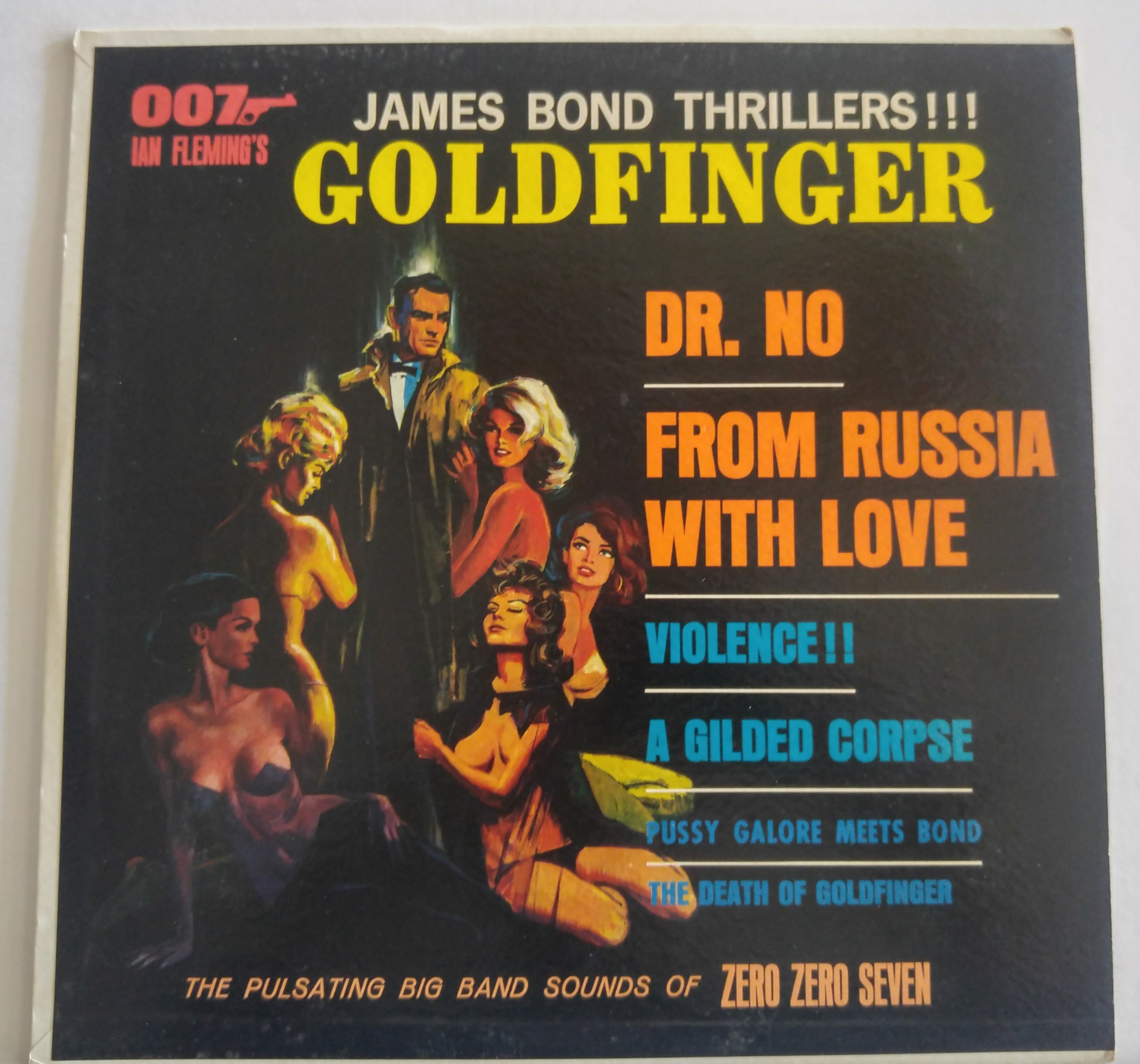 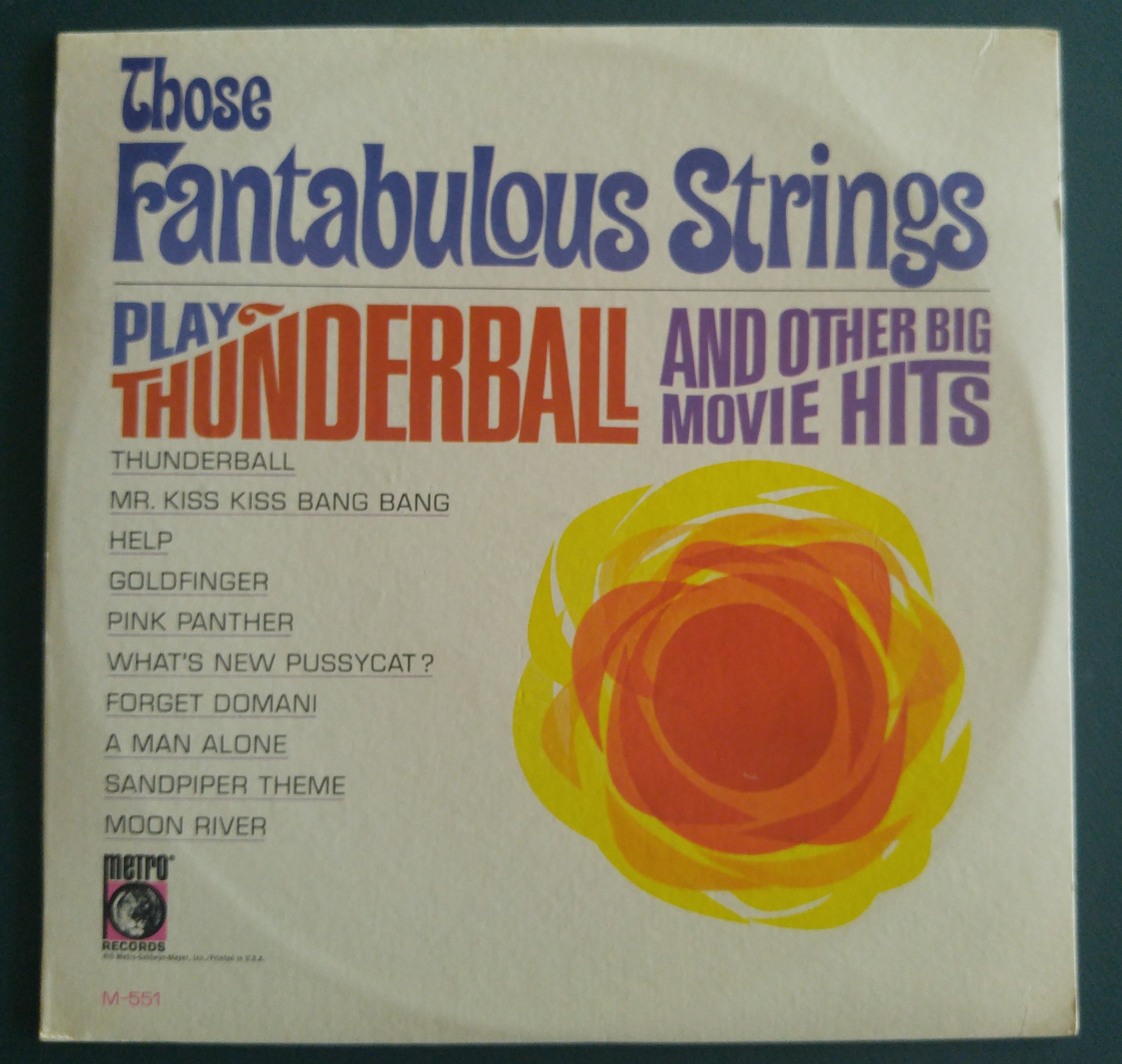 Those Fantabulous Strings Play Thunderball and Other Big Movie Hits (Metro Records) – I have to admit that the artwork on this album leaves something to be desired, but I bought it anyway, so I must have been hypnotized into buying it by the jacket artwork. 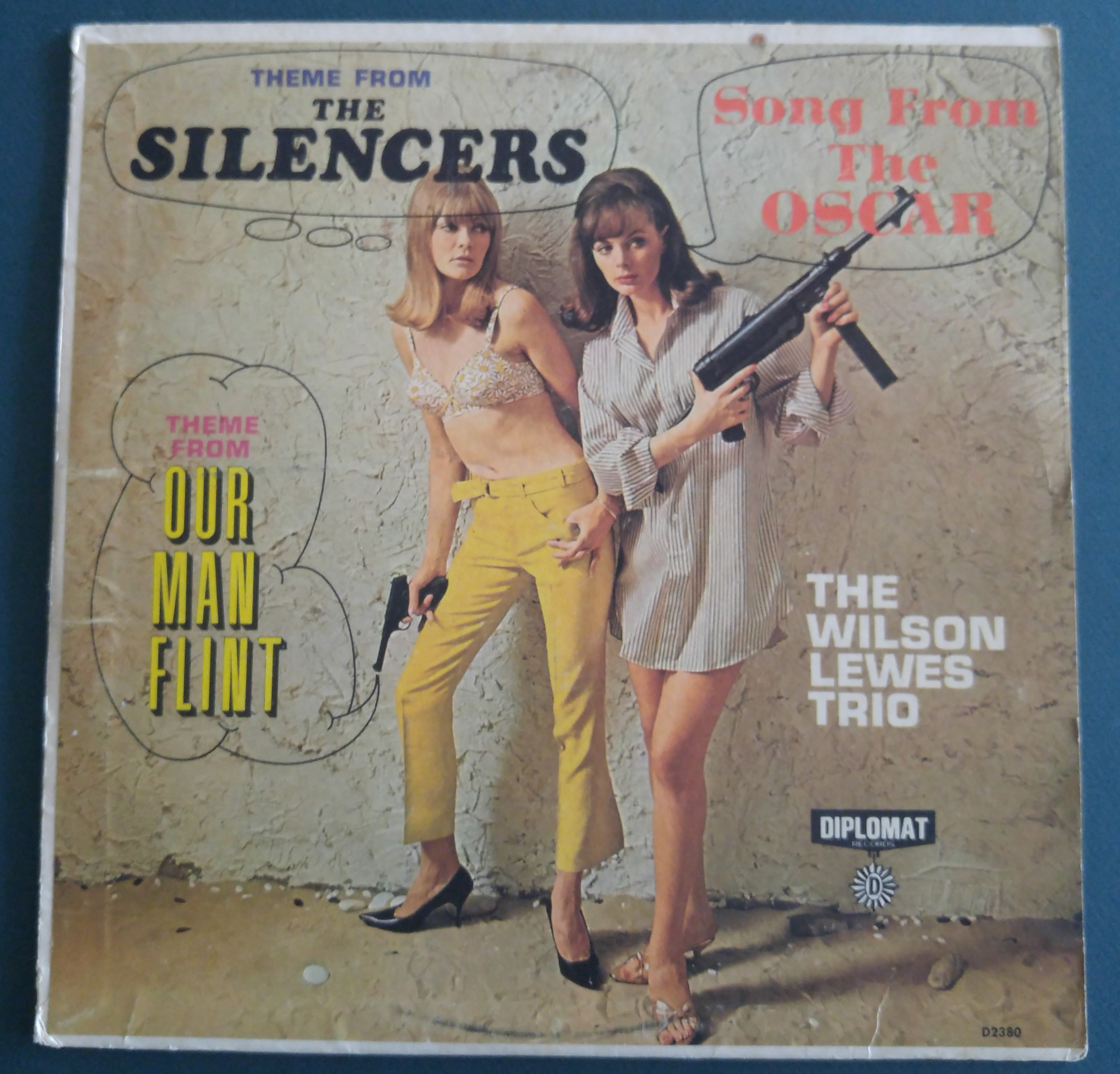 And last but not least, with all the talk of a female 007, I have to include another Diplomat Records release featuring themes from various spy movies as performed by The Wilson Lewes Trio. As the back jacket liner notes indicate, “fine records need not be expensive”; well, only if you want original artists, I guess.  Diplomat doesn’t even bother to come up with a title for this album. The jacket art shows that female agents apparently work best when only partially clad.

So that’s it for my pseudo-Bond albums. If you see something you like, remember than nothing shown has any real collectible value, so you can find most if not all of these on eBay for reasonable prices, or possibly at your favorite thrift store. Collect, not because you think it will have value in the future, but just because you like it. Happy hunting!