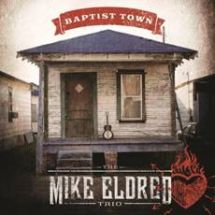 Roots music “super-band” The Mike Eldred Trio has released their fourth album, Baptist Town, and Boomerocity will tell you right now that this is a must have album.

“We’re excited to be working with the Mike Eldred Trio on the release of their new album, Baptist Town; it’s an amazing recording and a welcome addition to the CEN/RED roster,” said Adam Pollack of CEN/RED. The Mike Eldred Trio is offering fans a special pre-order date of April 8th, which includes a bonus instant download of the lead-off track, “Hunder Dollar Bill.”

Recorded at the iconic Sun Studio in Memphis, Baptist Town paints a musical picture steeped in the rich history of the South and the folklore that is so important to American culture. The trio’s members are guitarist/vocalist Mike Eldred, a former member of Stray Cat Lee Rocker’s Big Blue; and the potent rhythm section of bassist John Bazz and drummer Jerry Angel, both from The Blasters. The album was engineered by 2016 Grammy Award-winner Matt Ross-Spang, who recently engineered Jason Isbell’s latest CD, Things That Can’t Be Undone.

Baptist Town is a monumental achievement in roots and blues storytelling, presented as a multi-layered blues journey through Mississippi juke joints, prisons, churches, and Baptist Town, itself. For the recording sessions, the trio invited several friends to lend a hand, and David Hidalgo, Robert Cray, and John Mayer all joined in for the magic. The documentary about the recording session that features Robert Cray is at the bottom of this article

The catalyst for the album is the small neighborhood outside Greenwood, Mississippi, where legendary blues guitarist Robert Johnson was murdered in 1938. The track “Somebody Been Runnin’” references the final chapter of Johnson’s “deal with the devil” made at the crossroads, and some say fulfilled in the tiny community of Baptist Town the night he died.

Baptist Town also focuses on the poverty and racism of the past, which still exists to some parts in the Deep South today. Baptist Town remains mostly as it did in Johnson's time and is a stark contrast to the surrounding city of Greenwood, Mississippi. The dichotomy between love and hate, rich and poor, sin and salvation, black and white, are apparent throughout the record, and reflect many of society’s struggles that continue to haunt us all.

“This is our fourth album, and even before I wrote the songs for it, I knew I wanted to record it at Sun Studio,” recalls Mike Eldred about the sessions. “I had taken a trip down to Mississippi with my daughter because she wanted to do a road trip with me through the South, and we found Baptist Town while searching for Robert Johnson’s grave. I was immediately struck with the harsh poverty and the contrast between the city of Greenwood, just across the railroad tracks, and the tiny, mostly unchanged community of Baptist Town.

“It hit me hard, and I have been back to Baptist Town at least four times now, getting to know the people, interviewing them, etc. It was that first trip that turned out to be the catalyst, though, to write about my experiences down there.”

All 13 tracks on Baptist Town literally drip with authenticity and soul, like Spanish moss hanging from a Mississippi hardwood tree. It’s all here: lowdown blues, uplifting gospel, field hollers, ghostly chants and flat-out rockers, plus a blistering cover of The Beatles’ “Can’t Buy Me Love” that is completely turned inside out. “The songs are about traditions, folklore and culture, but also about what we all see in America… poverty, racism, over-indulgence, hate, and love. They poured out. Seeing that part of our heritage changed me forever,” says Eldred about the songwriting process.

“These contrasts are apparent throughout Baptist Town, and the thought came to me to have Robert Cray play the solo on the title cut,” remembers Eldred. “His guitar is so pure, and placed on a very dark canvas like “Baptist Town” really sets the tone of the record.

“I was having dinner with John Mayer the night before I was going to record with Robert, and I told John about the recording, and he says, ‘I want to be on it!’ So, of course we set it up and found a cool track to record with him on lap steel and electric, and me on acoustic (his guitar) and vocal. John graciously offered to have me come to his home in Montana and record it there with Chad Franscoviak engineering that session.

“On ‘Bess,’ we asked David Hidalgo from Los Lobos to come in and play accordion and sing background vocals on it. We brought him into El Rancho Del Soul Studios in Arizona, and filled the room with tequila and Carnitas, making this crazy blues-Tex-Mex-Ranchera tribute to Bessie Smith.”

With a wealth of history and legendary recordings made within its walls, Sun Studio in Memphis seemed like a no-brainer to record the majority of the tracks on Baptist Town.

“The room is overwhelming sometimes, especially when you realize where you are and what you are doing,” offers Eldred. “The last two songs we recorded were acoustic. Very quiet. You could hear the room. It’s ‘The Ghosts of Sun’ as Jerry Angel described it. Beautiful. There was a time during the recording and I was just looking down at the floor, realizing that it’s the original tile floor… and I thought, ‘Man, Howlin’ Wolf stood there…’ Crazy.

“Sun is a magical place, and we were brought into that space by Grammy Award-winning engineer Matt Ross-Spang, who ushered us through an amazing part of our lives. We will never be the same for sure.”

Voted one of the best guitarists in Americana/Roots/Blues music, Mike Eldred formed the trio with John Bazz and Jerry Angel to make the kind of music they always wanted to make. Their first CD (The Mike Eldred Trio) sent shock waves throughout the Americana/roots blues community garnering rave reviews and extensive radio airplay. The band's second CD (61 and 49) was voted one of the Top Ten CD releases of 2011 by The Los Angeles Times. Besides their own headline touring, The Mike Eldred Trio has been opening tours for artists such as Buddy Guy, Jimmie Vaughan, Los Lobos and George Thorogood, among others.

The band enlisted several key components to help tell the story of the concept and recording of Baptist Town so that the listener could actually be as close to the process as possible.
• Photo documentation by Associated Press photographer Matt York.
• Video throughout the recording process and historical background shots by Adam Genzink.
• Shooting at Sun Studio and in and around Memphis and Mississippi.
• Film and photos of the community of Baptist Town with interviews.
• 15 page blog outlining the concept, writing, preparation, and recording of “Baptist Town” here: Baptist Town Blog

Along with the recordings, The Mike Eldred Trio has been assembling a full-length documentary film to engage the viewer with the creative process, the recording of the album, the history and continuing issues with the South, and to enlist the Secretary Of Interior to recognize the neighborhood of Baptist Town as a National Historic Landmark as the place of death of one of America’s most significant and influential musicians, Robert Johnson. The film will feature interviews by many artists including Billy F. Gibbons, Robert Cray, David Hidalgo and Scotty Moore.
“We envisioned this project and knew it would be interesting to see how it would unfold, but I never realized it would unfold like this,” summarizes Eldred. “We wanted to make a record that reflected the soul of the South, acknowledge the poverty and racism that continues to exist, and celebrate the culture that has helped define American music.”