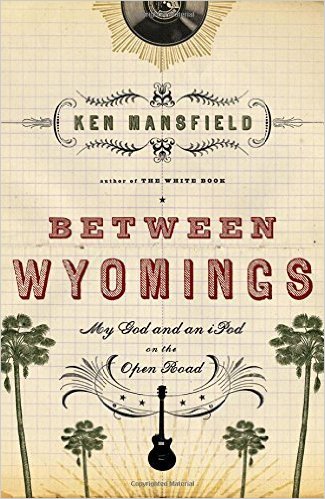 The 60’s culture was characterized by, among other things, the Beatles and the Stones, free love, drugs, and search for spiritual enlightenment. I just finished reading the Ken Mansfield’s final installment of his trilogy that chronicles his life with the Beatles, in particular, and in the music business in general. The book is entitled, “Between Wyomings” and, upon finishing it, I realized that he pretty much checked all the characteristic boxes of what the 60’s represented.

If you hate the Beatles, Country Music, the music business, travelogues or Christianity, then you won’t like this book. That’s sad, though, because you’re really going to miss a special treat by not reading “Between Wyomings."

Having thoroughly enjoyed Mansfield’s previous two books (“The Bible, The Beatles, and Bodega Bay” and “The White Book”), I was not disappointed with “Between Wyomings” because I’m one of those geeks that love the celebrity stories, the insight into the inner-workings of business – especially the music business – and I appreciate certain chronicles of people’s spiritual journey.

“Wyomings” brings the stories of Mansfield’s life in the entertainment fast lane to a conclusion that one might find surprising: He’s wrapped up the stories and, though it’s a huge part of his past, he’s reading to move on to new “roof top” experiences.
The backdrop of the book is a road trip of reflection and introspection that Ken takes with his wife, Connie. The trip was to last one year and the itinerary was to hit the geographic landmarks of their pasts, both as a married couple and prior to their marriage.

With lots of windshield time, many memories were remembered and insights gained, many of which were triggered by songs playing in random rotation from his and Connie’s iPods (they brought their own for variety sake). Whether the song was one he produced, knew the performers or writers of, or merely a song that is tied to a memory of his past, the thoughts, images, and lessons learned all surge to the front of his fertile mind and wind up in the pages of “Between Wyomings."

As I mention in my interview with Ken Mansfield, three of the most compelling stories in the book involves a period of time when his career had crashed and burned, leaving him to work lowly, manual labor intensive jobs in Nashville.

The stories are lessons in humility and faith that involve, unbeknownst to them, Julian Lennon, James Taylor and Whitney Houston. I won’t tell the stories here but what I will say is this: If you or someone you know are, or have ever been, down on your luck and scraping the bottom of life’s barrel after a life of success, the book is worth buying just to read these three stories and Mansfield’s lesson’s learned from them.

The climax of the book involves a surreal but epiphanous experience on the roof top of the old Apple Records building in London, England. For you non-Beatles fans, let me explain. The Beatles’ last performance took place on that roof top on January 30, 1969. While countless people enjoyed the “impromptu” concert from the streets and nearby buildings, Ken Mansfield was one of a very few privileged people who witnessed the concert (he’s the lad in the white jacket, often seen in the proximity of Yoko Ono).

If you’re a voracious reader and love the aforementioned types of stories, I would highly recommend reading Ken Mansfield’s previous two books, in order of publication, prior to reading “Between Wyomings”. It’s not absolutely necessary but they will give you a rich backdrop and foundation from which to read and better appreciate this last volume. If, however, you are doing well to read one book a year, then I would cut to the chase and read, “Between Wyomings”.

After doing so, reflect on your past – and look for future – roof top experiences of your own.

Peter Asher Talks About The Beatles A to Zed
1155 views
Posted November 2019 It’s hard to believe that next year marks the fiftieth year since The Beatles ...