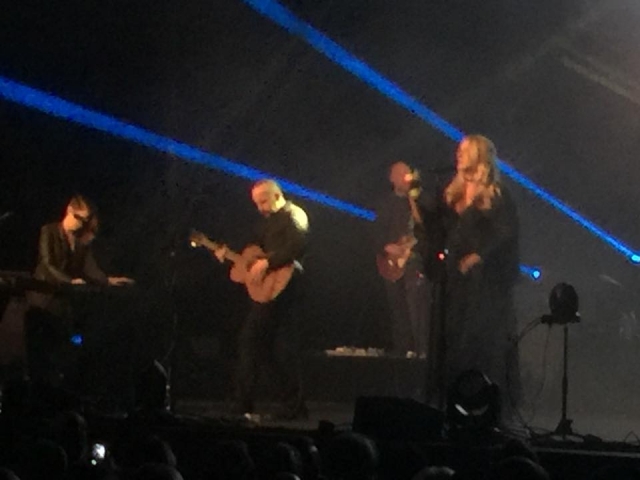 For the sixth time Boomerocity has watched Black Jacket Symphony perform a classic rock album live and for the sixth time they have blown Knoxville away with their treatment of a classic rock . This time, it was Fleetwood Mac’s Rumours album and it was delivered to near perfection. Performed at the historic Tennessee Theatre (their second appearance at that venue), BJS had the sell-out crowd eating out of their talented hands during both halves of the show.

BJS’s whole presentation isn’t to look exactly like the band they’re covering but to sound as close to them as possible . . . and the always deliver.  In this case, Ms. Taylor Hunnicutt even looked a little like Stevie Nicks as she delivered her part of the vocals beautifully and effortlessly. Blair Breitreiter returned – this time covering  Christie McVie’s parts – both on vocal and keyboards – equally as perfectly and Sean Heninger delivered Lindsey Buckingham’s parts on guitar and vocals with perfect pitch underpinned with enthusiasm and high energy.

The rest of the band was nothing short of amazing. Ben Owens was back on guitar and knocked it out of the park throughout the evening. Also back was Aaron Branson on bass and Mark Lanter on drums and vocals. Joining them was Brad Wolfe on guitar.

The first half of the show was devoted to performing the Rumours album in the order of its track list with fun, enthusiasm and high energy.  The second half of the show had the band delivering fan favorites from other Fleetwood Mac albums, each leaving the crowd anxious for more. During the intermission, BJS announced that they would be back February 2nd to present their treatment of the late Tom Petty’s Damn The Torpedoes album.

We might not ever get a chance to see Fleetwood Mac in concert again. If that’s the case, Black Jacket Symphony does an excellent job delivering the next best thing.