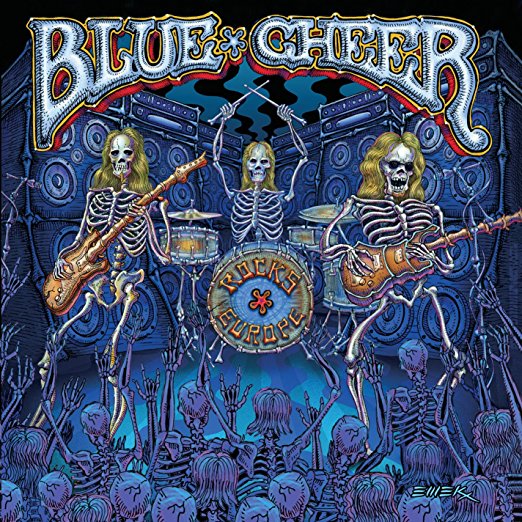 Blue Cheer muscled their way onto an unsuspecting late-’60s rock scene with an aggressively overdriven sonic assault that was as brutal as it was unprecedented. In the process, they helped to lay the groundwork for heavy metal, punk, grunge and innumerable variants of those genres.

Original members Dickie Peterson and Paul Whaley kept the band’s engine burning for much of the next four decades, maintaining the same pummeling intensity that had originally established Blue Cheer as one of their era’s most subversive and influential musical forces.

Embodying the raw, uncompromising attitude that first put the band on the map, the ten-song set is a potent testament to Blue Cheer’s enduring legacy, with Peterson and drummer Whaley joined by guitarist Andrew “Duck” MacDonald, who first became a member in the late ’80s. The double-disc bonus tracks are “Alligator Boots” and “She’s Something Else.”

Blue Cheer originally rose from the heady late-’60s San Francisco rock scene, although their blunt attitude and unapologetically unsophisticated psychedelic-blues approach made most of their Aquarian-age contemporaries sound positively polite by comparison. Their landmark 1968 debut album Vincebus Eruptum was edgy and rebellious even by late-’60s standards, yet somehow launched the band onto AM radio with their apocalyptic demolition of Eddie Cochran's “Summertime Blues,” which reached #14 on the U.S. singles chart.

Although Blue Cheer disbanded in 1972, Peterson revived the group a couple of years later, and it remained active for much of the ’70s, ’80s, ’90s and aughts, spending much of its last two decades based in Germany.

Blue Cheer’s undiluted passion is evident throughout the ten-song live set, which is a mix of old and new material, with four songs (“Parchman Farm,” “Out of Focus,” “Doctor Please” and “Summertime Blues”) from Vincebus Eruptum, three (“Babylon,” “Just a Little Bit” and “The Hunter”) from its follow-up Outsideinside, and three more (“Rollin’ Dem Bones,” “I’m Gonna Get to You” and “Maladjusted Child”) from 2007’s What Doesn't Kill You.

While the iconic classics confirm how far ahead of its time Blue Cheer was in the ’60s, the newer material demonstrates how staunchly the act maintained its original musical mission without succumbing to staleness. Rounding out the double-CD set are two previously unreleased studio tracks, “Alligator Boots” and “She’s Something Else” which confirms the band’s ongoing vitality and the sadness of Dickie Peterson’s loss.

Eulogizing Peterson in the pages of Rolling Stone, Rush’s Neil Peart did a good job of summing up Blue Cheer's appeal. “Dickie Peterson,” Peart wrote, “stood at the roaring heart of the creation, a primal scream through wild hair, bass hung low, in an aural apocalypse of defiant energy. His music left deafening echoes in a thousand other bands in the following decades, thrilling some, angering others, and disturbing everything — like art is supposed to do.”