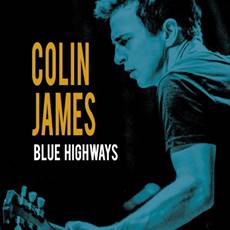 In the spring of 2015, Colin wrapped up his “Hearts on Fire” album tour. After a couple of months of straight touring, Colin was loving playing with the band and really happy with the sound they had created on stage. What better time to make an album? Especially the album Colin had been itching to make for years - a collection of some of his favorite blues tracks. In less than a week, Colin and his touring band went into The Warehouse Studios in Vancouver, and in just two days, Blue Highways was born.