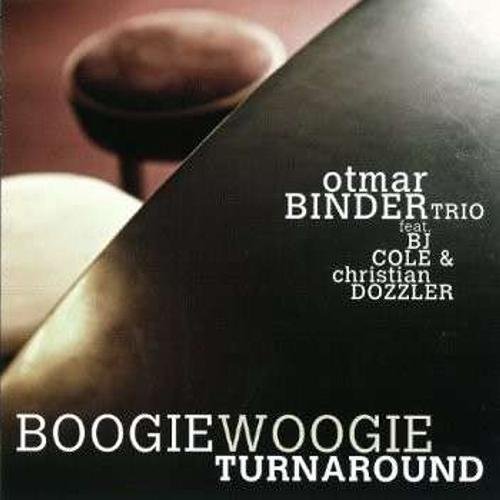 While the origins of boogie woogie music is often debated among serious musicologists and fans of the genre, it is often assumed that it’s a distinctly American rooted style. Let’s just run with that assumption for the sake of this review and assuming that boogie woogie is a decidedly American style, who in the wide, wide world of music ever think that great boogie woogie would come out of Vienna, Austria? Not only that, but new, ORIGINAL boogie woogie, at that?

Well, folks, it does and it has – in the form of an album just now hitting the shores of this great country. That album is Boogie Woogie Turnaround by The Otmar Binder Trio featuring B.J. Cole and Christian Dozzler.

If I were forced to sum this project up in one word, it would be: WOW!

If I were to take this album and play it for you die-hard fans of the genre, you would bet a dollar to a donut (Krispy Kreme, at that – extra filling) that the musicians are from the deep south. Yeah, these guys are that good!

The trio is made up of the band’s namesake, Otmar Binder, on piano, Alexander Lackner on bass and Michael Strasser drums. As the album covers indicates, they also get some help from BJ Cole on pedal steel and slide guitar and Christian Dozzler on piano.

The whole darn album is great but I must draw attention to a couple of the tunes. If I had to pick a favorite song from the album (and I really wouldn’t want to because I love the whole album), it would be Changes Would Be Made. Gospel music lovers might think as I do that it puts them in mind of Andre Crouch’s The Blood Will Never Lose Its Power. Also in a gospel vein is the tune Uphill. I can almost hear this one being played during the offertory at some of the churches I attended as a kid growing up in the deep south.

Finally, the last track, Floyd’s Turn, is dedicated to Floyd Cramer, whose "Last Date" was a huge hit in Austria. Otmar told me that, “it was actually the signation of a radio show called ‘Music To Dream To’, and back then, I really didn't listen to the radio much. People kept coming up to me when I played on occasions and sometimes would ask, ‘Excuse me, do you by any chance play Music To Dream To?’ and I didn't have a clue what they meant. When I finally found out, I really liked the tune so here's a little appreciation for that.”

And appreciation is what you will have when you pick up your own copy of Boogie Woogie Turnaround. Yeah, it’s that good!

Written by Randy Patterson
All rights reserved. Permission for use may be obtained by contacting Boomerocity.com.

Angie Bowie Talks About Re-Recording "Backstage Passes" and Other Projects
651 views
Posted July 2021 If you followed Boomerocity for very long at all, you already know that I had the ...