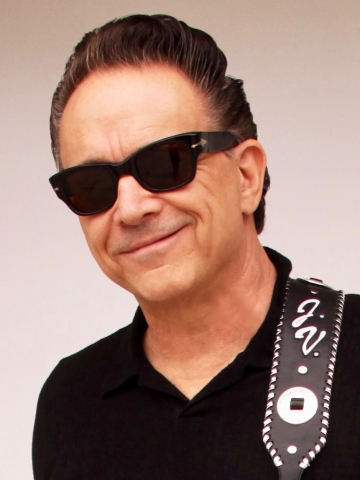 As my friends and some Boomerocity readers know, I spent the better part of twenty-five years in the Dallas, Texas, area. Prior to launching Boomerocity in 2009, I was, obviously, a music nut, and it didn’t take long to hear about two brothers from the area who were each amazing guitarists in their own right: Stevie Ray Vaughan and his brother, Jimmie Vaughan. SRV was taken from us in August of 1990 but left an indelible mark on rock music. Jimmie Vaughan (I and many of my friends would erroneously refer to him as “Jimmie Ray Vaughan” – sometimes, I still do) was the guitarist and signature sound behind the Fabulous Thunderbirds.

I want to state here that my daughter and I attended Stevie’s funeral. I mention it only because, a) Jimmie and I discuss his brother’s death towards the end of our chat; and, b) I briefly mentioned it to him at the beginning of our chat as we were making introductions and small talk.

Being a Vaughan brother’s fan – both individually and in their duo and Click Below To Listen to the Interview respective bands, ever since the launch of Boomerocity, Jimmie Vaughan has been on my short list of artists that I’d give my eye teeth to interview. With the release of his new album, “Baby, Please Come Home,’ the opportunity to chat with him became available . . . and I still have my eye teeth.

After our introductions and small talk, I asked Jimmie if I had counted correctly that “Baby, Please Come Home” is his seventh solo record.

“You know, I don’t know. I’m not sure. I’d have to go figure it out. Let’s see, I’ve got Strange Pleasure – you’re talking solo. You’re not talking T-Birds? I did the Jimmy Reed Highway (with Omar Kent Dykes). I guess you’re right. Seven solo albums excluding the T-Birds.”

When I asked Vaughan how this LP is different for him than all of the other albums – solo or otherwise – in recording, approach, and related areas, he shared:

“Well, I didn’t change my approach. I mean, basically, what I do is record live in the studio. I’ll get together with my band and we rehearse and just play the songs. Then, we just go into the studio and record them. If we need to overdub something, we do. But, basically, it’s live.”

Not to get too deep into the recording weeds, I did want to know if he recorded the disc digitally or, did he go the analog route that some artists are going back to.

“Oh, no, they have everything now. Most studios have digital. We end up on tape. The tape sounds better. These songs are definitely on tape. When you’re recording it, you utilize everything you need and then you put it on tape, and it does the same thing. You get the tape compression. It happens after you record it and you’ve manipulated it. Whatever you’re gonna do, you mix it. Then you play it on tape. That gives you the same thing. I think everybody is concerned and notices any difference, uses tape. You can really hear the difference. When you put it on tape THEN on digital, you don’t lose that (the analog quality). It’s all about the compression and the way you do it. We know how to do it!”

Regarding the story behind this album, Vaughan shared:

“It was just a lot of songs that I love. I went and recorded them down in San Marcos (Texas). It’s my band. We went and recorded what we wanted to and there it is! It sounds more simple than it is, I guess. It’s the real deal for us.”

Artists will often point to a particular song on their discs as a calling card for the entire album. When I asked Jimmie which cut he would choose as this album’s calling card, he was actually stumped.

“Gosh! You know? Listen, I like everything on it. I’ve got Lefty Frizell, Jimmy Donley. Songs by Lloyd Price, Bill Doggett, Earl Garner. Did I say T. Bone Walker? It’s really all over the place. When I first started playing, the first record that I bought was by a band called the Nightcaps. You know them. They were into the same thing. They even did some of the same songs. That’s really what I’m into. If you come see me, you’re gonna get all that and I play stuff from my career over the years. But, basically, I’m playing what I love, okay?”

I commented that the album is a “feel good” album that makes you involuntarily lift up your head and shoulders while tapping your feet.

“I agree with you! That’s really why we did it ‘cause – it might be kinda hard to explain ‘cause it’s just what we do. It’s real and we’re not trying to put on any airs. This is us.”

Recording albums is often a long and laborious effort for artists and wondered how long this project took for Mr. Vaughan to record.

I often ask “tenured” artists this question: If you were made music czar, how would you fix the business, or does it need fixing? I asked Vaughan this question.

“Go-olly! Ha! Ha! Maybe I’d just fire everyone and start all over. Ha! Ha! That would be the most fun, right? Well, you know, first of all, government shouldn’t have anything to do with music. It’s the absolute opposite. If the government told me what to do, I’d tell ‘em to go screw themselves. So, that’s the way I feel ‘bout it. Ha! Ha! Because it’s art and it has nothing to do with government. I don’t like all the government this and that; subsidize this. That’s bull. I think it’s for entertainment.”

Is the business broken?

“I don’t know because I only think about what I like to do, and I don’t listen to all the other stuff unless it’s somebody I know. There are some really good examples of new music that I like. And there’s a lot of new guys coming up in my hometown that I really like. Have you heard Dylan Bishop? Jay Milano. Gary Clark. He’s from Austin. Paul Walker is coming up.

“See, here’s the thing: I don’t pay any attention to what’s going on out there. I’m sorta in my own world, musically speaking. I don’t really care what they’re doing. As far as I’m concerned, I’m in the anti-music business. How ‘bout that? I’m anti all the stuff that’s goin’ on. I don’t want to be mean, but, at the same time, I’m really in my own world, musically speaking, okay? I have a manager and I have people that help me do the business part – and I really don’t know much about that. I’m only concerned with the music. I try not to let myself be taken advantage of. At the same time, I’m really focused on the music part of it.”

I know that Jimmie Vaughan/Fabulous T-Bird fans would want to hear an answer to this so I had to ask: Will there ever be any sort of reunion with the Thunderbirds and is Jimmie ever going to do any more recording with Dennis Quaid?

“Well, actually, I just did a song with Dennis Quaid and Tanya Tucker. They came to town – they came to Austin and called me and said, ‘Hey, come over here and we’re gonna record. Come over and play guitar on a song.’ I just did it! There’s the answer to that one.

“I would love for the Thunderbirds to get back together! ‘Course, a couple of the guys have died. We had a lot of drummers and bass players. So, maybe we could talk Mike Buck into it and get us another bass player. I’d love to play with Kim (Wilson). I’m playing anyway and very proud and happy about what we did, Kim and I, back in the day. That would be fun!”

And what’s on Jimmie’s radar for the next year/next couple of years?

“Well, we just started promoting the record. We’ve been out on tour with Buddy Guy. We’re going to play the Hollywood Bowl with Buddy Guy. We’re going to play in London. The record’s coming out. We’ve got a lotta shows coming up. I’ve got my whole band with the horns in it. Everything. We’re out here tearing it up! Oh! And we’ve got (Eric Clapton’s) Crossroads coming up, too!”

As we closed, I said I hoped to catch one of his gigs in the future since the last time I saw him was at his brother’s funeral in Dallas back in 1990.

“It’s been twenty-eight years since Stevie got killed. Stevie was a fabulous musician but what nobody thinks about is, it seems like, Stevie Ray Vaughan is my little brother. Anybody’s that’s got a little brother or little sister will know what I’m talking about. Just think about it if you lost your little sister tragically. What would you do? There’s no way that you can explain it. There’s no way you can feel okay about it. Now, it’s been twenty-eight years and I’m just pissed off that he got hurt and killed and I’m not gonna get over it. I have a wonderful family, children, a beautiful wife and I have a wonderful life. I get to play my guitar every day. I’m very grateful. But it’s very hard to deal with losing someone like that.”

Switching to a more “light” subject, I asked Jimmie if there was a “holy grail” of guitars and did he own it.

“I like Stratocasters and Telecasters. Now, I have a couple of Gibson’s I like to play. An ES-350. I like guitars but I love to play Stratocasters. Stratocasters are like hot rods. You can always put a different neck on it or change the pick-ups or do a paint job or whatever you want. They’re like ’40 Fords, you know what I mean? I’ve always got ‘em tore apart, doin’ somethin’ on ‘em.”

Wrapping up our chat, I asked Vaughan how he wanted to be remembered and what he hoped his legacy will be. 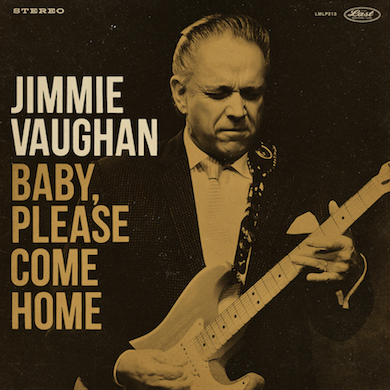 “Oh, gosh! I don’t know that I want to come up with that answer. I just want everybody to say what they want to say. I just have a lot of fun. I always have fun out her on the road with my buddies and me. We drive around and play guitars and play music, laugh and joke. This is the best job in the entire world! There couldn’t be a better job than this! You get to express yourself every night! Hang out with your friends. Sounds like a Willie Nelson song, doesn’t it? Ha! Ha! I can’t imagine that there would be a better job than this.”

We all envy him and what better person to have a job like that Jimmie Vaughan?

Keep up on the latest with Jimmie at JimmieVaughan.com and be sure to catch one of his shows if you’re lucky enough to have him and his band stop near you.