Snowy White - Boomerocity Finally Has Something On Him 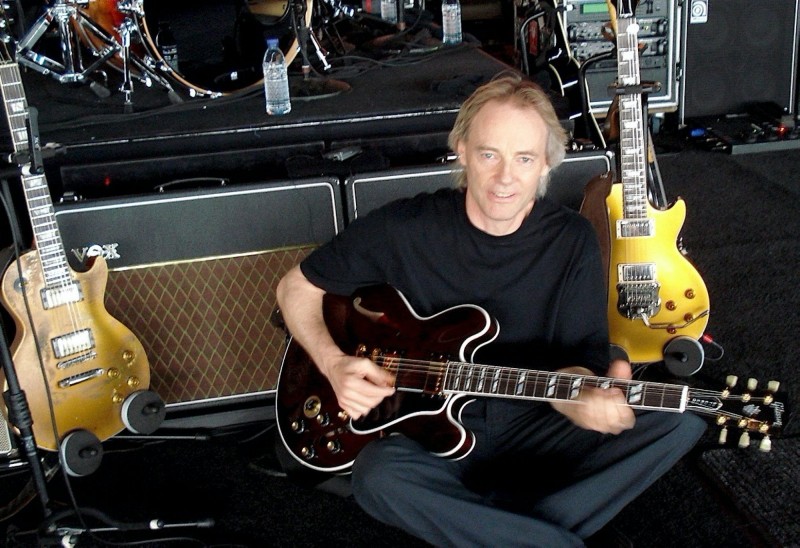 Hard-core blues and Pink Floyd enthusiasts have certainly heard of Snowy White. For those of you who haven’t, we have “borrowed” Snowy’s biography from his website, SnowyWhite.com. We have it posted, below.

Admittedly, Boomerocity has just recently become aware of Snowy via his new album, ‘Something On Me’. What a tremendous disc! We highly recommend adding it to your listening library.

Because we became an immediate fan, we reached out to him, requesting an interview to which he graciously accommodated. The audio of that chat is on the right. Suffice it to say, he’s as an amazing a person as he is a guitarist. We love the man on both counts!

On the call, we chatted about the new album, touring, and what’s on his radar in the next year or so. After you listen to the interview (and as we said a minute ago), we highly recommend ordering your copy of ‘Something On Me’ for your own listening library as well as order a copy or two for your friends who love the blues. You can do so by clicking on the album cover on this page.

We also suggest that you keep up with Snowy by visiting SnowyWhite.com.

Snowy White is one of a handful of classic, blues-orientated British electric guitar players - musicians whose sound, technique and style has echoed the originality of the blues with the excitement of contemporary rock.

At the age of eleven he first heard the urban blues sound that had been emanating from the United States, people such as BB King, Buddy Guy, Otis Rush and Albert King, and was immediately aware that this was the music that he wanted to incorporate in his playing. He has developed his own style of ‘English’ blues, a combination of clear, clean blues phrases and harder-edged riffs that are a recognizable feature of his very personal songs.

Arriving in London in the early seventies with the classic ‘few pennies in his pocket’ he gradually made a name for himself Click Below To Listen To Our Interview With Snowy White among the local musicians and became respected as a tasteful player and an easy guy to get along with.

In 1974 he toured the east coast of America, getting as far south as New Orleans and discovering that he thoroughly enjoyed being ‘on the road’. He had by then become friendly with the now legendary English blues guitarist Peter Green and they spent a lot of time jamming together.

During the mid-seventies Snowy played on various sessions, developed his skills in the studio environment, and started writing his own material.
In the Autumn of 1976, he was invited to tour America and Europe with the Pink Floyd as their first augmenting musician, a gig which took up most of his time throughout 1977.

In 1978 the band’s keyboard player Rick Wright asked him to play guitar on his solo album, entitled 'Wet Dream,' which he recorded in the South of France.

In 1979 Peter Green decided to head for the studio once more and invited Snowy along to jam. The result was the album entitled ‘In the Skies’, now something of a collector’s item.

He was then asked by the Pink Floyd to go to America to rehearse their new show entitled ‘The Wall’, and, at the same time, the rock band Thin Lizzy invited him to become a full-time member. So, after the completion of the Floyds’ US dates, he returned to England and went straight into the studio to record his first Thin Lizzy album 'Chinatown'. This album includes some songs co-written by Snowy, notably the title track. Two and a half years of world tours and recording with the band followed, including the making of Snowy’s second album with them, entitled ‘Renegade’. Snowy again co-wrote some of the songs and the title track. After this long period of work he decided that it was time to do his own thing and quit the band in 1982.

In the following twelve months he got together with musicians that he had known and admired for a long time - drummer/percussionist Richard Bailey, keyboard player Godfrey Wang, and his good friend for many years, bassist and producer Kuma Harada. Together they came up with Snowy’s first solo album, ‘White Flames.’ A single, the timeless ‘Bird of Paradise', written by Snowy, which was taken from the album, became an international hit.

However, the idea of becoming a ‘singles’ artiste, with the consequent concern about where the next hit record was coming from, did not appeal to him, and he took a break to rethink his musical direction. During that time, he put together a gigging blues band, 'The Blues Agency', with drummer Jeff Allen, his old friend Kuma on bass, and, as he wanted to concentrate only on playing the guitar, singer and harp player Graham Bell. Between 1986 and 1989 the band played in the UK and Europe, and recorded two albums, ‘Change my Life’, followed by ‘Open for Business’ (which was released in Europe as ‘Blues on Me’.)

In June 1990 Roger Waters, having split from the Pink Floyd, asked Snowy to perform with him on the spectacular ‘The Wall’ show in Berlin.
In 1991 Waters again called upon Snowy, this time to play at the ‘Guitar Legends’ concert in Seville as part of Expo.

After this concert Snowy decided that it was time that he returned to the mainstream of things so he set about putting down songs that he had been writing during the previous few years. The result was the album entitled ‘Highway to the Sun’. Recorded in the Summer of 1993 it contained ten original songs plus a version of Peter Green’s ‘I loved another Woman’, a long-time favorite of Snowy’s. The album also has guest appearances by Chris Rea (slide guitar on the title track), David Gilmour and Gary Moore. It also introduced two new brilliant Dutch-Indonesian musicians, Juan van Emmerloot (drums/percussion) and Walter Latupeirissa (bass and rhythm guitar). Kuma Harada also played bass and rhythm. John ‘Rabbit’ Bundrick featured on keyboards. The video of the title track has Chris Rea guesting on slide.

‘Bird of Paradise’ then came back into the picture when KLM airlines decided to use it on their new TV advertising campaign, resulting in the single reentering the charts in Europe and the compilation album ‘Birds of Paradise’ doing extremely good business for most of 1994.

Snowy’s next album project was released on the UK record label RPM. Entitled ‘Gold Top’, after his well-known Gibson Les Paul ‘Goldtop Standard’ guitar, it features material in which Snowy has been involved from as far back as 1974 right up to 1996. This album includes two tracks from Thin Lizzy, jams from the Peter Green ‘In the Skies’ session (with Peter on 2nd guitar), Al Stewart live in Philadelphia (1974), and the only complete version of the Pink Floyd song ‘Pigs on the Wing’, featuring Snowy’s original guitar solo (never before released), as well as some live Snowy White blues and some previously unreleased material. Dave Gilmour and Chris Rea also appear on tracks taken from his recent ‘Highway to the Sun’ CD. The album closes with the hit single ‘Bird of Paradise’.

Another compilation, entitled ‘Pure Gold - The Solo Years’ was also released in 1999.
Also, in this year Snowy joined Roger Waters for his bands' ‘In The Flesh’ US tour, which was so successful that, in the Summer of 2000, Roger again toured the States, this time recording a live album and making a film of the show.

Early in 2000 ‘Little Wing’ was released in the States under the title ‘Melting’, and in July of that year Snowy White & the White Flames played a showcase gig at BB King’s Blues Bar off Times Square in New York. 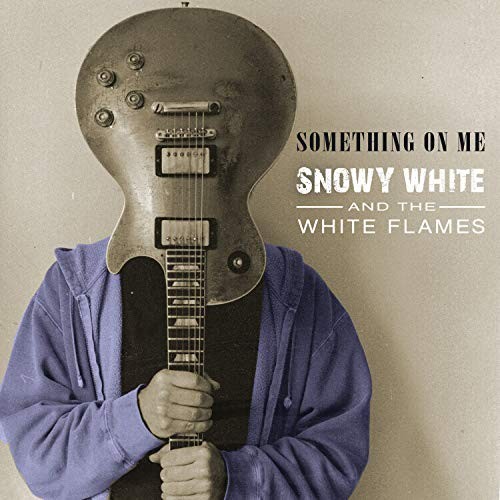 From February to July 2002 Snowy toured the world with Roger Waters.
Spring 2005 saw the release of a new White Flames cd, entitled "The Way It Is", with a basic four-piece outfit consisting of Richard Bailey (drums/percussion), Walter Latupeirissa (bass) and Max Middleton (keyboards). Guest musicians include Juan van Emmerloot on drums/percussion, Kuma Harada on bass guitar, James Lascelles on Hammond, Dawn Knight on backing vocals and Ray Carless on saxophone. Track listing: No Stranger to the Blues, Bird of Paradise, Black Magic Woman, What I'm Searching For, Angel Inside You (parts one and two), Falling, The Way It Is, A Piece of Your Love, This Time of My Life, Easy, Sweet Bluesmaker.

From April to October 2006 Snowy toured Europe and America with Roger Waters.

The Autumn of 2006 saw The White Flames Band performing in the UK and Europe.

A live album from the White Flames Band, entitled 'Liveflames,' was released in October 2007.

April to June 2008 Snowy toured again with Roger Waters, after which he started work on a new White Flames Band album entitled 'Realistic', with Juan van Emmerloot, Walter Latupeirissa, and Max Middleton. The recording of this album continued through 2009 and into 2010.

In the Autumn of 2008 Snowy formed The Snowy White Blues Project, with Matt Taylor (guitar/vocals), Ruud Weber Jnr (bass guitar/vocals), and Juan van Emmerloot (drums), recording a blues-orientated album, 'In Our Time of Living.' During 2009/10 the band were gigging throughout Europe. They released a live album 'In Our Time...Live' in 2010.

In the Summer of 2010 Snowy completed the recording of 'Realistic', which was released in early 2011.

Autumn 2010 saw Snowy touring the USA, Canada and Mexico with Roger Water's 'The Wall' show, which then continued throughout Europe in the first half of 2011 and returned to the USA in 2012.

In between these tours he found time to record a live DVD, 'After Paradise', featuring many of the musicians that have played with him over his long career. Tracks included are: I'm Getting Ready, Midnight Blues, I'll Be Moving On, Red Wine Blues, Judgement Day, Blue To The Bone, Slabo Day, Tears In My Eyes, Lucky Star, Bird Of Paradise, The Journey (Parts1 and 2), Falling, On The Edge Of Something, Ongoing..., Can't Get Enough Of The Blues, At The Crossroads. Plus: interviews and "The Making Of".