Andy Watts Is In His International ‘Supergroove’ In his home country of Israel, Andy is widely considered to be Israel’s Ambassador of the Blues. His live shows in Israel, along in the UK and the rest of Europe, both as a solo act and with his amazing band, Blues on Fire, has earned him a well-deserved reputation as a fiery, passionate blues guitarist and singer.

Andy's has performed with many of the modern blues greats whom Boomerocity has interviewed over the years such as Joe Louis Walker (here) and Johnny Winter (here and here) along with other amazing blues artists such as Kenny Neal, Lucky Peterson, Rick Estrin, Bernard Alison and Eliza Neals, amongst others.

Andy developed such tight musical chemistry with Kenny Neal that Kenny not only co-produced Andy’s new album, Supergroove, but he also released it on his label, Booga Music, in conjunction with the Vizztone label group.

Supergroove is a highly charged album of ten electrifying blues tracks - dusted with a bit of rock, funk and R&B - featuring Andy’s sometimes gritty, sometimes slinky guitar and his soulful vocals along with his great band – including bass, drums, keyboards, trumpet, trombone, saxophones and occasional guest harmonica. On this album, the groove is king! 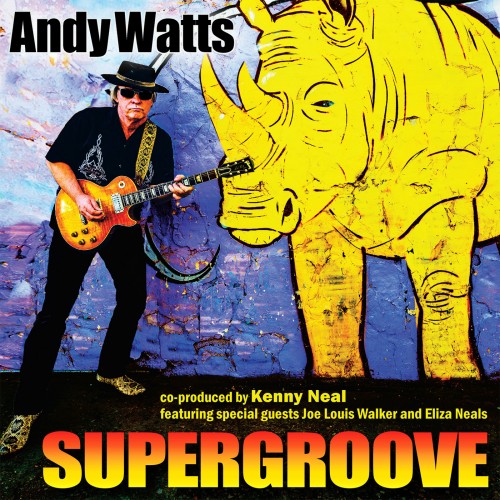 Guest vocalists on the album include Joe Louis Walker and Eliza Neals, plus explosive soul singer Roy Young, along with Danny Shoshan and Gadi Altman.
Half of the songs are Watts originals, while the others are Andy’s versions of classics by Freddie King and Andy’s biggest musical influence, the one-and-only Peter Green, Joe Louis Walker and Rick Estrin.

So, please watch this interview with Andy, share it with your friends, and then order Supergroove by clicking on the album cover! You can also keep up with the latest with Andy by visiting his website, AndyWattsGuitarslinger.com.