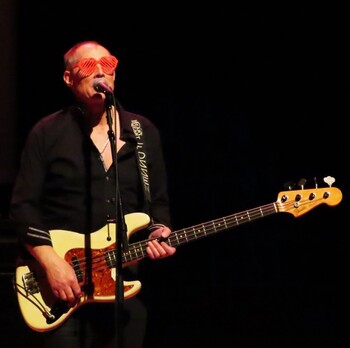 Photo by Haunted Song PhotographyIf you were listening to rock radio in the early 80’s, you undoubtedly remember the incredible, new sounds by female-fronted band called ‘Heart’. Originally named “White Heart”, it was co-founded by its bass player, Steve Fossen. He worked on the first five albums (Dreamboat Annie, Little Queen, Magazine, Dog and Butterfly, and Bebe le Strange). Steve is heard on several of Heart’s greatest hits albums and other compilations. Steve’s “Heart by Heart” website shares a brief history of Heart:

Beginning with 1975’s “Crazy on You” from Heart’s debut album “Dreamboat Annie,” the music of Heart has always had a home on the radio, a fact for which Fossen says he is grateful.

“I’m very appreciative of classic rock and classic hits radio for keeping our music alive for so many years,” he said. “It’s really cool to listen to the radio and hear a Pink Floyd song followed by a Led Zeppelin song and The Beatles and then a song by Heart will come on. It’s just a great feeling. I sit there and think ‘How did that ever happen?’”

Heart’s origins can be traced back to 1967 when Fossen formed The Army – a band that eventually morphed into Heart in 1969 after a series of different names and personnel changes, key among them being the addition of Ann Wilson in 1972 followed by sister Nancy in 1974. Heart went on to release six top-10 albums and landed 20 hit singles on the Billboard top 40 chart, including “Magic Man,” “Barracuda,” “Straight On,” “Heartless” and “Even it Up.”

Fossen and Derosier left Heart in 1982 following the recording of “Private Audition” and were inducted into The Rock and Roll Hall of Fame with the rest of the classic Heart lineup in 2013.

“That was an amazing night,” Fossen said of Heart’s induction. “I had a conversation with Ann and it was good to reminisce a little bit. We have such high regard for our rock and roll heroes that it was a little surreal when we joined them in the Rock and Roll Hall of Fame. There’s a part of 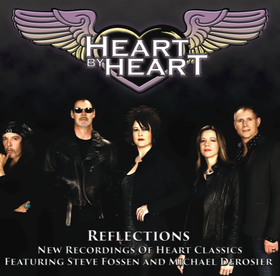 Click Above To Order Your Copy!you that says, ‘You’re not worthy’ but then you remember how big Heart was - and still is - such a big part of classic rock, that it was a no-brainer for us to be in there.” (author: Mike Dow)

It’s no surprise, from all of these accomplishments, that it all led to Steve being inducted into the Rock and Roll Hall of Fame with the rest of the band back in 2013.

Fossen left Heart in 1982. Several years later, Steve formed “Heart by Heart” – to play Heart hits as well as other original compositions. In the video interview, below, Steve shares some more insight into both Heart as well as Heart by Heart. We also talk about a lot of other things that led to lots of laughs.

Please carefully watch and listen to this interview. I’m sure you’ll find it fun and interesting. Afterward, please share the link to this interview with your friends who might like it. Also, follow the latest with Steve and his band, Heart by Heart, at their website, HeartbyHeart.com.

The Boomerocity Interview with Steve Fossen