Jeff Pilson Is No Foreigner To Great Music 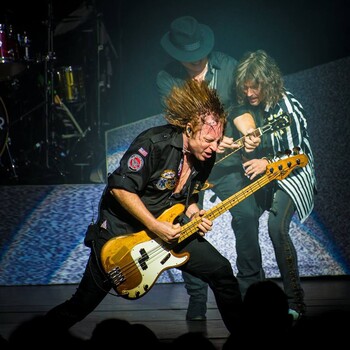 Dio, Dokken, and MSG fans will know Jeff from his tenure with those bands as well as his own progressive metal group, War and Peace that he formed in 1989 and the two-member band he formed with George Lynch, Lynch/Pilson in 2003. When he wasn’t tied up with all of those bands and their projects, he played with other groups and artists (the guy definitely doesn’t let the grass grow under his feet!).

In addition to being a sought-after bassist, Pilson is also quite skilled on the guitar and keyboards and is in demand as a record producer, as well, having produced the first two CDs of San Diego metal band Benedictum as well as the recent release from Adler, featuring original Guns & Roses drummer, Steven Adler.

As if that all isn’t enough, Jeff has successfully tried his talented hands at acting, having appeared in the movie, “Rock Star, 2001” in which he played bassist, Jorgen, of the fictional band Steel Dragon. The film also featured performances by musicians such as Zakk Wylde, Jason Bonham, Myles Kennedy, Brian Vander Ark, Blas Elias and Nick Catanese. To boot, Pilson also played on the film’s soundtrack and served as Musical Director for the film.

With this wealth of work to his credit, you can see what Boomerocity wanted to chat with Jeff Pilson. After you’ve watched the interview, share the link to it with your friends. You can also keep up with Jeff at his website, JeffPilson.com as well as with Foreigner at ForeignerOnline.com.

The Boomerocity Interview with Jeff Pilson

Tom Fuller Discusses 'Waterfall'
567 views
One thing that Boomerocity LOVES is being pleasantly and surprisingly introduced to talent we’ve not...