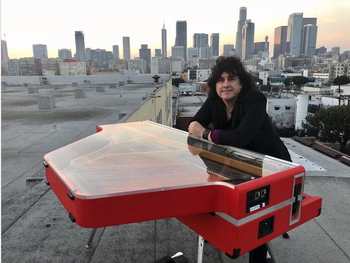 To use a phrase often used in the South: Bob Malone is good people and that is the title of his latest album.

Bob Malone first came onto the Boomerocity radar in August 2015 via its review of his album, Mojo Deluxe (here), and have been a fan of his ever since. And while it’s always been a desire to interview him, that opportunity just recently presented itself and was immediately pounced upon.

More about Malone in just a moment. First, about this interview.

This interview (at the bottom of this page) was conducted via Zoom with Bob at his Southern California home. As with all Boomerocity interviews, they’re laid back and easy going. Malone and I just let the interview flow and spin off from the handful of questions I asked him.

This interview was an absolute blast to conduct and Boomerocity looks forward to many more chats with Bob in the years to come.

Now, for those of you who aren’t familiar with Bob Malone, Boomerocity will shamelessly lift what his website says about him:

Malone Alone: Called “a keyboard wizard” by The New Yorker, Bob Malone has toured the world as a solo artist for over two decades and has played keyboards with John Fogerty since 2011. Bob is featured on the 2017 Ringo Starr record Give More Love, and his recording of “You’re A Mean One, Mr. Grinch” was the theme in the Illumination/ Universal movie trailers for “The Grinch”, heard by millions. Bob combines unforgettable songwriting with an eclectic hybrid of high-energy rock, uptown blues, melodic piano pop, New Orleans R&B, jazz chops and a voice all his own. His latest single “Good People” is out now!

When not touring with his band or with John Fogerty, Bob Malone brings his solo show to acoustic listening rooms, small theaters and house concerts around the world. Just Bob, a piano, a microphone and a stompbox, the show has the high energy impact of a full band performance combined with storytelling and pin-drop ballad singing in the best of the troubadour tradition.

Music Connection Magazine says of his solo live album, Malone Alone: “Fiery performances and on-mic asides reveal the masterful storyteller and musician at his most entertaining.”

The Bob Malone Band: Bob’s four touring bands are made up of all-star players from around the globe and include A-list session players in Los Angeles, New York, New Orleans, and Rome. Artists his bands have toured and recorded with include The Neville Brothers, Journey, Tom Petty, Bruce Springsteen, Joe Cocker, Jerry Douglas, Gino Vannelli, Joe Sample, and Claudio Baglioni. Add to this the gospel powered Malonettes background singers and it adds up to a high energy, eclectic hybrid of rock, blues, melodic piano pop, and New Orleans R&B, with a light dusting of jazz chops all around.

The magic and energy of Bob’s band shows are captured in full on his Mojo Live album and DVD, captured live at the Grand Annex Theatre in Los Angeles.

With John Fogerty: Bob Malone joined John Fogerty’s band in 2011 and has been touring and recording with the classic rock legend and former Creedence Clearwater Revival front man ever since. Bob’s piano, Hammond B3 organ and accordion playing have been showcased increasingly over the years, as can be seen and heard on the 2020 “My 50 Year Trip: Live From Red Rocks” CD and DVD. He also plays on John’s 2012 album “Wrote A Song For Everyone” including John’s duets with Bob Seger, Miranda Lambert, and Keith Urban. In addition to appearances on Late Night with David Letterman, Good Morning America and The View, Bob has played with Mr. Fogerty at The Hollywood Bowl, Radio City Music Hall, New Orleans Jazz & Heritage Festival, Byron Bay Blues Festival (AU), the Netherlands’ mammoth Bospop Festival, and countless other arenas, theaters and festivals worldwide.

In The Studio: Bob Malone has been an in-demand session player and arranger for years. Highlights of the hundreds of recordings he’s played on include Ringo Starr’s Give More Love, John Fogerty’s Wrote A Song For Everyone (with Bob Seger, Keith Urban, and Miranda Lambert), The Bobs Rhapsody in Bob, and Mary Gauthier’s Drag Queens in Limousines.

Audiences will explore Golden-Age classic rock anthems by Faces, Fleetwood Mac, The Band, Creedence Clearwater Revival, Bob Dylan, Joe Cocker and more, transformed into foot-stomping displays of keyboard pyrotechnics. And they will also experience the best of Bob’s own catalog of songs — from fist-pumping rockers to cathartic piano ballads.

I encourage you to keep up with the up-to-the-minute latest with Bob Malone by going to his website, BobMalone.com. While you’re there, visit his store (here) and purchase a few – if not all – of his CDs. You’ll definitely want them as part of your musical library.

The Boomerocity Interview with Bob Malone