Arielle Talks About Being An Analog Girl In A Digital World 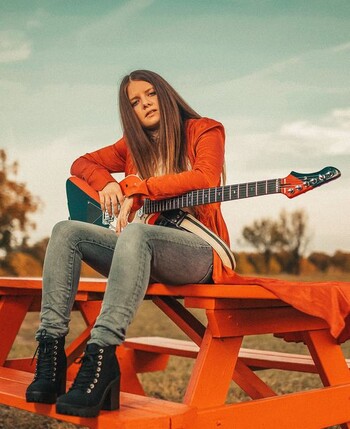 There are those who assume that because I get to chat to everyone, I get to chat with that I’m keenly aware of everyone in the music business.

When I learn of someone who I feel that I should’ve already heard about, I tend to feel a bit more stupid. Such is the case with Arielle. I feel as though I should’ve have been aware of this woman’s talents from the git go. And while I’m both embarrassed and disappointed in myself for being late to the Arielle party, I’m glad that I at least made it.

Arielle is a phenomenal talent. Seriously. She’s a great guitarist, songwriter, and performer. When I learned about Arielle’s work, I jumped at the chance to interview her and, long story short: I’m now a fan and look forward to a lot more from her, musically.

According to her publicist, “Arielle is a young woman who was born in the wrong generation. At times facing depression in being a child of the new millennium versus the boom of musically creativity that emerged in the Sixties and thrived through the Seventies. And on a broader basis, a time even earlier where things were done by hand, with a level of craft that couldn’t be hidden behind technology. She offers, ‘I take and protect those principles inside my music.’

“And by extension she now looks towards finally presenting the guitar she’s been creating in partnership with Brian May for many years. The instrument is a hybrid of Arielle’s guitar and Brian’s core design that the duo collaborated on with one another. Arielle shares, ‘I’ve been playing my primary instrument for the last fourteen years.’ For more detail on that endeavor and plans for the release visit brianmayguitars.co.uk. As she shares, ‘For the first 25 guitars sold, I will plant a tree. I have been growing trees in my office for about 3 months now starting from a seed. These are tone wood trees. The very trees we musicians cut down for our guitars that sometimes take 60-100 years to reach maturity. I purchased an empty lot and will be planting these in Florida, so that in a few decades, they will be here protected, seen & admired. Once you break something down to its essence, it's a lot easier to respect. Perhaps it’s the only way to 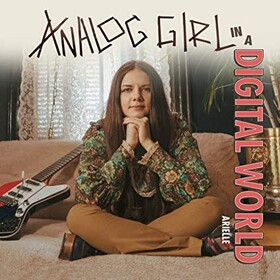 Click Above To Order Your Copytruly understand something. After seeing how hard it is to even grow a tree seedling...I respect guitars a lot more now. How much time went into that life before it was cut down. Pretty amazing. I want that essence in the music. Nature, Heart, Analog. Soul. Care. Love. Honesty. Flaws. Yet, still magic (which I spell with a K). A portion of the proceeds from these four livestream events is earmarked to support this endeavor.’

Please closely watch this interview and then visit her website and order her work. You won’t regret it.

Below the Boomerocity interview with Arielle (below) is a press release for some of the livestreaming shows she has scheduled as well as information for her new album, Analog Girl In A Digital World, related website links and her social media links. I encourage you to sign up for one or more of the livestreams. You won’t be at all disappointed.

The Boomerocity Interview With Arielle 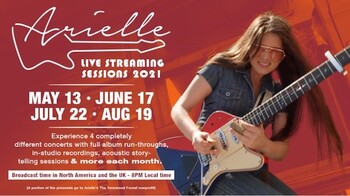 
FOUR LIVESTREAM APPEARANCES PLANNED FOR MAY 13, JUNE 17, JULY 22, AND AUGUST 19
FOR TICKETS, BUNDLES AND MORE:
https://imarielle.com/ OR www.noonchorus.com/arielle

Arielle has released a second instant gratification track titled “Inside & Outside” from her new studio album Analog Girl In A Digital World. The accompanying music video can be screened via the video insert at the top of this page.

She shares, “When I was recording the entire Analog Girl In A Digital World Album, I thought this song was the closest in sound and production that I got to what my goal was in my head. Fleetwood Mac Rumours meets...something new. The song is truly about finding balance between the external, dense physical world we live in, as well as countering it with the spiritual and emotional connection of love and real synergy." Prior, the lead track “Peace of Mind” presented imagery captured in the studio which can be seen to the right, as well.

Four livestream performances are planned in the coming months. The first, which will be exhibited on May 13 will capture Arielle performing the new album in its entirety. The second, planned for broadcast on June 17 will feature her last studio album Suspension / Dimension played from first note to last. The third which is scheduled for July 22 will present a set curated by Arielle featuring person favorites culled from her repertoire. The final livestream will be staged on August 19, presenting the artist performing with scaled back accompaniment. Arielle offers, “For the first two streams, we chose to perform ANALOG GIRL IN A DIGITAL WORLD as well as SUSPENSION/DIMENSION front to back. Since touring is out of the question, making sure that people could experience these albums the way they were intended meant a lot to me. Both of these albums feature a succinct story from beginning to end. Within the livestreams, I will be speaking about the meaning of the songs, and some of their deeper history to take people on a journey that has yet to be told about both of these albums, maybe even beyond what I could do live.” Each event will broadcast at 8PM local time in the U.K. and Eastern Standard.

There is something magical that surrounds Arielle’s presence whether in the flesh or as captured on the masters she’s created throughout her career. Her love of the Arts was omnipresent in her life from the age of five, but the realized vision truly began to reach the ears, hearts, and souls of a global audience when she began releasing repertoire independently in 2015. In some respects, she is from a past era, down to earth while connected to the discovery, exploration and dreams that were omnipresent in the lives of those from previous generations. On this new collection of songs, she has never been truer to her love of the 60’s and 70’s, and the inspiration that lives in her art from a connection to this wondrous time. When asked how she hopes people perceive her and her art, she shares, “Like the little place in the forest you go when you need some time to just breathe...it reminds you of home and makes you feel safe but brings you a bit of magic. And every time you go there, it comes back and stays with you for a while.”

With Analog Girl In A Digital World, Arielle set out to capture a current glimpse of the impact the music and feelings the Sixties and Seventies have indelibly left within her. The album was recorded half in analogue, half in digital, utilizing three separate studios. These were Welcome To 1979 in Nashville (a facility that truly provides artists with a pure solution to record to tape), Michael Wagner’s studio Wireworld also in Nashville, and The Bubble in Austin, TX. Arielle has shared track by track insights which can be accessed here: imarielle.com/analogpress

ABOUT THE TONEWOOD FOREST
The Tonewood Forest was founded in 2020, and is a nonprofit dedicated to growing, planting and maintaining tree species specifically harvested for musical instruments, known as “tonewood” trees. These include mahogany, ebony, rosewood, koa, alder, birch and other endangered species of trees due to overharvesting. Plots of land have been purchased worldwide to have each of these species grow in their native environment, adding to the wildlife preservation and education.

Edgar Winter
Dolly Parton Discusses "I Believe In You"