Paul Gilbert and His 'Werewolves of Portland' 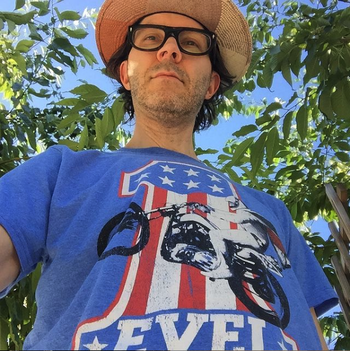 The interview you're about to watch is with Paul Gilbert. Mr. Big fans and Racer X fans are quite aware of who Paul Gilbert is. Or those of you who are into amazing guitarist and love to study their techniques know who this amazing guitar virtuoso is. Either way, he doesn't need any introduction to y'all. He's a phenomenal guitarist who has worked with not only Racer X and Mr. Big (his own bands), but he's collaborated with and recorded with Todd Rundgren, Carmine Appice, Jeff Pilson of Foreigner, and Neal Morse, to name a few and all some of the highest caliber musicians in rock. It also gives you an idea of how well Paul is thought of. It's no surprise because the guy's work speaks for itself.

That all said, he's also a great guy to talk with. Funny and just a blast to talk with about a lot of subjects. But we focused mainly on his new album that just come out called, “werewolves of Portland”. Great album, amazing guitar work.

Paul, and I talked for about 30 minutes about the new album, the music industry in general, the pandemic, and things of that nature.

The video of the interview is below. Please give it a good listen. And if you have good friends who love great guitar work and don't know who Paul is, I'd encourage you to have him listen to this interview.

After listening to the interview, please read the press release about “Werewolves of Portland” below the interview window. Also, please keep up with him at his website, PaulGilbert.com.

The Boomerocity Interview with Paul Gilbert

Portland, OR – Today, Paul Gilbert and The Players Club / Mascot Label Group release the virtuosic guitarist’s 16th solo Werewolves of Portland. Gilbert has captured a stompin’ solo performance video of “Hello North Dakota!” to mark the occasion which can be screened to the right. The guitarist shares, “Let's start with the things I love. The trees. The rivers. My local guitar repair shop, bakery, and grocery store. Beautiful places for walking and biking. Driving to anything in less than 15 minutes. My musician and recording engineer friends. Small businesses and wonderful restaurants. My son's school and teachers. The pie bakery! I love all these. Then there's that other stuff you see on the news. I don't want to kick Portland while it's down. But if it stays like this, I may need to sneak away. I'm hoping to live somewhere that isn't in the news so much. I haven't heard much about North Dakota lately, which is good. I've actually never been there. I like buffalo. That's a start. Thank you, Paul.” 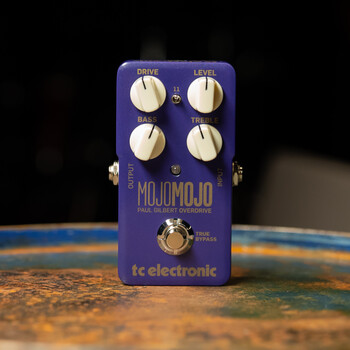 MOJO MOJO and Paul Gilbert have released a new signature overdrive pedal, inspired by the gear he has been performing with for years. Danish guitar effects company TC Electronic, whom he’s been collaborating with for almost a decade, collaborated with the guitarist on the design and creation of the Mojo Mojo Paul Gilbert Edition. The redesign of his mainstay overdrive pedal truly adds a new dimension of pure shredding power to the pedal board. Gilbert offers, "The Mojo Mojo has been a mainstay on my pedalboard for years. I love the tones that it gives me! But I always wished that it was purple. Now it is purple! And it goes to eleven! Even better!" Look to the left for a glimpse at the design.

“It has been an absolute pleasure and a unique experience to work with Paul on tailoring this pedal to his exact needs and preference,” says Paul Robert Scott, Customer Solutions Guitar and Bass Leader. “And we’re not just talking about a new stylish custom color. Paul always uses the same settings on his MOJOMOJO, which meant there was no need for the additional Voice switch found on the original version. Instead, we went for an ‘Eleven’ switch that engages a massive gain boost for even more drive and attack, taking it to, well, eleven! On top of that, you can add stepped-up circuit board voltage that increases both headroom and dynamics significantly.” Further, MOJOMOJO PAUL GILBERT EDITION features classic TC Electronic characteristics such as True Bypass, easy battery compartment access, road-worthy reliability and an intuitive user interface that supports a constant flow of creative juices and spontaneous ideas.

With the international lockdown putting the world on hold, Gilbert approached recording Werewolves of Portland playing all the instruments on the album himself. He offers, "It took me about six months to think of it, but it finally occurred to me that I could play all the instruments myself. I've always loved playing drums, and I can play bass and keyboards well enough to get the job done."

When it comes to writing, Gilbert reveals that surprisingly it isn't the guitar that provides the impetus. "Mostly, I write by singing. I use the lyrics to give myself a structure where I can hang the notes. Once the melody is long enough to have some life in it, my musical instincts can take over. I can often finish the song without needing more words. But if I get stuck, lyrics will always get me going again." He continues, "My guitar can hit the high notes! It's amazing to have the physical limitations of my voice… gone! The challenge is to be expressive, with all the slides, vibrato, dynamics, and tones that a voice has. I'm constantly learning vocal melodies on guitar, so I get used to playing with the kind of expression that singers have. "

Recorded at Opal Studio in Portland with co-producer and engineer Kevin Hahn, Gilbert pulled out some of his current favorite guitars for the job. "I mostly used my Ibanez Fireman guitars," he says. "I've been collecting vintage Ibanez guitars lately, too. I brought some models from the '70s, '80s, and '90s like the Ibanez Artist, Roadstar II and Ghostrider. I also brought and modified a '60s Epiphone Olympic. I used to play those in the early days of Racer X, so it was fun to have a guitar that reminded me of my early shredder style."

The album title's inspiration partly comes from the Warren Zevon song, "Werewolves of London". "I live in Portland and thought it would be funny to substitute the name of my much lesser-known city. My original idea for the 'Werewolves' was just the guys in my band and me. When we play music, it is our version of 'howling at the moon'. Unfortunately, Portland has become more 'known' in the last year for events that are pretty sad to watch. And 'Werewolves' could take on other meanings that I certainly hadn't anticipated. But the title, to me, still has a musical meaning."

Gilbert is a formidable force. From his time in LA metallers Racer X to helping form Mr. Big, one of the era's most revered names. His distinguished solo career has seen him putting out 15 acclaimed records and has been asked to guest on albums from such diverse names as Todd Rundgren, Bowling for Soup, Glenn Hughes and MC Lars. He also toured with Joe Satriani and John Petrucci in 2007 (G3) and two years later with Richie Kotzen and George Lynch (Guitar Generation). This is not to mention a lengthy tenure as a much-in-demand teacher and instructor. This began when he was still a teenager, being hired in 1985 by the prestigious Guitar Institute of Technology (GIT) in Los Angeles.

"I didn't become a musician to shout my ideas, complaints, or philosophies at anyone. I love music because of the music. So, I love my method of using my inner rants as scaffolding to build melodies. This scaffolding can then be pulled away to unveil some pure emotional music. This works perfectly for me and hopefully for my listeners. "I need to be able to visualize the look and sound of my fretboard well enough to play accurately in my mind. It's almost like real air guitar! Then when I actually go to play the music, I've got a good chance of having my melodic intentions come true. And that's about the best feeling in the world."