The Rubinoos Talk The CBS Tapes 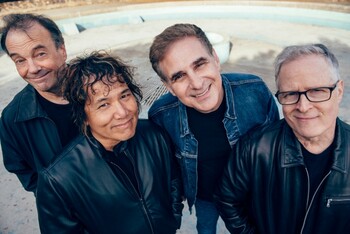 Have you heard of them?

They’ve been around for quite a while. And I had the opportunity recently to talk to them about a new album of sorts that they have coming out. It's actually made from some demo tapes made way back when, back before they became a known quantity.

I recently had the privilege to talk to the band’s founders, John Rubin and Tommy Dunbar. I thought we would probably talk maybe 20 - 30 minutes, but we wound up talking a little over an hour. We, of course, about the new CD - the new the CBS tapes. But we also talked about other things - about how it used to be whenever new music would come out or when one of our friends would get a new album, we'd sit down and at each other's house and just listen to the record.

If there was something we really liked, we would take the tonearm and move it back over and listen to the song again; reading the liner notes and see who's who all played in it, who were the producers and the engineers and all that kind of stuff. This was all back when new records were an event.

John, Tommy, and I lamented that this is no longer the case these days because music, unfortunately, has been reduced down to such a commoditized, disposable thing.

But, man, what fun those days were and I think we could probably have fun doing it again, especially with CDs like The CBS Tapes.

Anyway, we had a great time talking together. I love these guys. They were a blast to talk to; funny as all get out and I think you'll enjoy the levity that we had in this nearly hour long chat with each other.

I look forward to talking to them again, they were that much fun. Great couple guys and great music if you're not familiar with them.

Below the interview video will be the press release for The CBS Tapes. Be sure to check it out.

After watching the interview, share the link with your friend. Then, order The CBS Tapes and follow the Rubinoos at Rubinoos.com.

On November 2, 1976, Jimmy Carter was elected President of the United States. The events of November 3 were less earth-shaking, although it was the day the power pop pioneers The Rubinoos recorded this album. The group walked into CBS Studios on Folsom Street in San Francisco to, as band co-founder and singer Jon Rubin recollects, “have a ‘set up and get comfortable in the studio’ kind of affair.” Guitarist Tommy Dunbar, who started the group more than 50 years ago with his childhood pal Rubin, recalls they were told “something like, ‘okay, the tape is going to run, just go ahead and play anything you want’.”

The CBS Tapes chronicles that occasion, and its previously unreleased 11 tracks certainly reveal a wildly diverse set list that includes, yet reaches beyond, the power pop that the band is well known for. Selections range from the Modern Lovers (“Government Center”) to the Meters (“Cissy Strut”); King Curtis (“Memphis Soul Stew”) to the DeFranco Family (“Heartbeat, It’s a Love Beat”). The Rubinoos also tackle the bubblegum classic “Sugar, Sugar,” the iconic surf instrumental “Walk Don’t Run,” and a couple Beatles tunes (“She Loves You” and “I Want to Hold Your Hand”), along with a trio of now-rare originals (“All Excited,” “I Want Her So Bad,” and “Nooshna Kavolta”).

The CBS Tapes captures something unusual — a look into the recording process before it begins in earnest. This isn’t a lo-fi sloppy rehearsal tape, a stripped-down demo, or a polished finished product. Done without second takes and overdubs, the band’s loose, unencumbered live performances exude a joyful energy that embodies the band’s spirit. These recordings do benefit from Glenn Kolotkin’s engineering and mixing on the fly. By 1976, Kolotkin had already worked with acts like Janis Joplin, Journey, and Jimi Hendrix, and would go on to produce Santana, Joan Jett, and the Ramones.

The Rubinoos’ performances also are rather rude and juvenile; not really surprising since Rubin, Dunbar, and drummer Donn Spindt were still in their teens, only bassist Royse Ader had finished high school. Listening to these tapes after so many years made Dunbar think, “What a bunch of foul-mouthed little punks we were,” while Rubin felt their obnoxious behavior and crude language reflect the irreverent, bratty attitude that has always been part of the Rubinoos’ makeup.

Although still teenagers in 1976, these guys weren’t inexperienced. Dunbar and Rubin first formed the Rubinoos as 13-year-olds in 1970, so they could play a dance at their school, Bay High School in Berkeley, California. Spindt took over on drums a year later while Ader became the bassist in 1974. The band joined the fabled U.S. indie label Beserkley Records (Jonathan Richman & the Modern Lovers, Greg Kihn), through Dunbar’s brother Robbie, the guitarist in Beserkley’s first signee, Bay Area rock stars Earth Quake. The Rubinoos’ cover of the DeFranco Family’s “Gorilla” appeared on Beserkley’s Chartbusters sampler.

The Rubinoos’ 1977 self-titled debut attracted a good deal of attention and accolades. New York Rocker proclaimed it “the best pop album of the decade.” The group appeared on American Bandstand and their version of “I Think We’re Alone Now” reached no. 45 on the Billboard Hot 100 and Top 40 in Cashbox. Just last year, the New York Times’ Brian Raftery included the closing track, “I Never Thought It Would Happen,” in his piece “12 Essential Lesser-Known Power-Pop Songs.”

Success continued with the Rubinoos’ second album, Back to the Drawing Board, featuring the hit single "I Wanna Be Your Boyfriend,” and the band opened for Elvis Costello on his Armed Forces U.S. tour. The ’80s began with an ill-fated third album whose demos were released on 1994’s critically lauded Basement Tapes. The Todd Rundgren-produced mini-LP, Party of Two, contained the popular "If I Had You Back.” The Rubinoos returned triumphantly in 1999 with Paleophonic, which Allmusic described as a “delicious platter [that] picks up where their classic recordings left off.”

The 21st century has seen the Rubinoos still going strong. They have released three studio albums (Automatic Toaster, Twist Pop Sin, and 45), an all-covers album (Crimes Against Music), a children’s music album (Biff-Boff-Boing), three live albums, and several compilations, including a 63-song retrospective Everything You Always Wanted to Know About the Rubinoos.