Jeffrey Morgan - The Creem of the Crop of Confidential Rock Critics 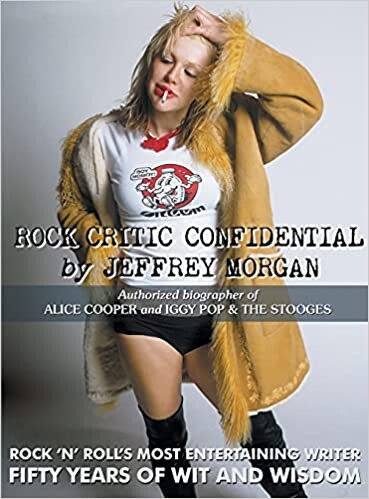 Click Above To Order Your CopyAs a teen in the seventies, I didn’t get to buy a lot of rock magazines because I had to work if I wanted spending money and, for what little money I could make back then ($2.00 per hour!), I had to be very selective on what I would spend it on. If I didn’t spend my hard-earned dollars on an album (which was a special treat for me), then I would buy clothes or reading material of some sort. Often, they were in the form of music-oriented magazines. My go-to rock magazines were Creem, Circus, and (sometimes) Rolling Stone.

Honestly, what would often dictate which magazine I would select to buy was what/who was on its cover. If one of my favorite artists happened to be on its cover, then it warranted a closer look to see if I should buy it. Otherwise, something else would have to command my attention to compel me to look at it and buy it.

More times than not, the “Boy Howdy” character on the Creem magazines commanded my attention. I suppose it was because it had some similarities (in my feeble mind, at least) to the keep on truckin’ characters I saw on t-shirts and posters at the time. I loved the weirdness of it all.

Fast-forward to today.
I connected with former Creem journalist, Jeffrey Morgan, via social media. I followed his posts regularly and loved (and still love) the memories of his career that he shares from time to time.

When he announced that he came out with a book, “Rock Critic Confidential”, a) I knew I had to get the book; and b) I knew that I had to interview him.

The interview on this page is the audio with Jeffrey set to a slide show of watermarked photos from his career. Jeffrey shared all sorts of incredible stories. Talk at length about his work and some of the people we both have had the privilege of chatting with.

This interview is an incredible glimpse into the world of rock and roll journalism from back when it was much harder to accomplish than it is today. Articles were written on typewriters. Photography had to be developed and you didn’t know what you had until it was. Access to artists was tough in different ways that it is today.

It just was different back then.

So, please give this interview a close listen. Share it with your friends. Buy Jeffrey’s book, “Rock Critic Confidential”. In fact, buy several as gifts for this Christmas. You can do so by clicking on the image of it on this page. Also, please visit Jeffrey’s website, JeffreyMorgan.info, to check out some of the images he has for sale as well as some of his other work.

The Boomerocity Interview With Jeffrey Morgan