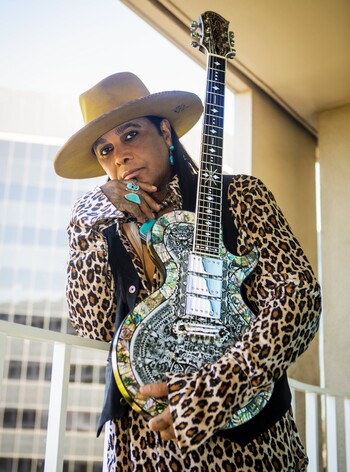 I'm always late to the party. In this case, I’m kinda late in “discovering” Micki Free. Now that I’ve learned about him, I’m a dedicated fan!

As you’ll see in the interview video, below, Micki and I hit it off immediately and, man! Does he have some stories to tell! I love this guy! He's a great human being as well as a phenomenal guitar player.

The first concert he attended was Jimi Hendrix. And you can certainly hear the influences of Jimi in Micki's playing. He was discovered by Gene Simmons of Kiss. He had his first big splash was back in when he was playing for Shalimar. He also enjoyed an amazing working relationship with Prince and calls many other artists his friends.

During our chat, below, we focused mostly on his new album, Turquoise Blue. It doesn't come out until February, but you’ll want to go ahead and pre-order it (click on the album cover on this page to order it). It's phenomenal.

It's got Cindy Blackman Santana on it. You'll know her from her interviews with us (some know her as Mrs. Carlos Santana). She’s a phenomenal drummer who does a song on there with Carlos’s band called, “World On Fire”. The album is great. You're just going to have to buy the album. The press release for the album is posted under the interview video.

After you’ve watched the interview (and have ordered the album), please share this page with your friends who would enjoy Micki’s kind of music and who might enjoy watching this interview.

The Boomerocity Interview With Micki Free

Click On The Lower Right Corner To Enlarge Video Above

PHOENIX, AZ - Heralded by Carlos Santana and Billy Gibbons, among many others, Grammy-winning blues-rock guitarist Micki Free announces a February 4, 2022, release date for his new album, Turquoise Blue, on the Dark Idol Music label, distributed by Burnside Distribution / The Orchard / Sony. Free’s mastery of tone is showcased on the new disc’s 13 originals, plus a scintillating cover of Jimi Hendrix’s classic “All Along the Watchtower.” The album was recorded, mixed and mastered by Ken Riley at Rio Grande Studios in Albuquerque, New Mexico.

“I wrote Turquoise Blue over the period of time when Covid first broke out and we were advised to remain at home,” Free recalls. “Interacting with my peers was just not an option. The songs are a direct testament of how I felt during that crazy time. Take my song, ‘Bye 2020;’ it tells exactly how I felt that year, with the dying, the masks, the quarantine, the protests, the fake news, the misinformation…. I just wanted to say, ‘Bye 2020!’ I enlisted my good buddy Steve Stevens from Billy Idol to lay down the first guitar solo and I did the second solo.

“I get my mojo from the classic greats—the masters of blues-rock and even classic rock,” Micki Free declares, “but everything I play comes from my own heart, and with Turquoise Blue, I feel like I’m really getting to the core of what I do in a way I hope people will connect with, because making music is about a connection so strong that it transcends language.”
Free’s resume reads like an almost-mythical backstory to a movie: a protégé and guitar-slinging peer of KISS’s Gene Simmons, Prince, Billy Gibbons, Carlos Santana, and Cheap Trick’s Rick Neilson; glorified in a popular Chappelle’s Show episode of “Charlie Murphy’s True Hollywood Stories,” as part of Prince’s team in a now-legendary basketball game. A featured member of R&B hitmakers Shalamar, he scored a top 20 hit with “Dancin’ in the Streets” and won a Grammy in 1985 for the song, “Don’t Get Stopped in Beverly Hills,” from the Beverly Hills Cop film soundtrack.

Free was born in West Texas of mixed blood Cherokee/Comanche Native American and Irish descent. Soon after, his family relocated to Germany, where his father was stationed as a sergeant in the Army. It was there at age 12 that an older sister took him to see Jimi Hendrix. “Jimi just blew my mind,” Free recalls. “He came out dressed like a gypsy with scarves and a flowing, psychedelic shirt, and his guitar was the most incredible thing I’d ever heard. From that moment on, I knew what I wanted to do with my life.”

After his family moved to Illinois, Free formed his first rock band, Smokehouse. When Smokehouse opened a concert bill that included the group KISS, Gene Simmons, himself, walked up to Free as his band was coming offstage and declared him “a star.” By that time, Free, had already developed a flair for rock ‘n’ roll fashion and the dynamic stage presence that’s one of his trademarks. Free was 19 years old when Simmons became his first manager. Since then, he’s been in the whirlwind of the music business, having recorded, written songs, and played with Simmons, the Rolling Stones’ Bill Wyman, Janet Jackson, Diana Ross, Prince, Little Steven, Sam Moore, Cheap Trick, Billy Gibbons, Carlos Santana, and Jean Beauvior of The Plasmatics.

During his nine years with Shalamar, Free was nominated for Grammy Awards three times. “I loved being part of that band and its success,” Free says, “but as a musician I felt I really couldn’t be myself. I was a blues-rock guitar player and songwriter who just wanted to let it fly and play from my soul.” Once free from the constricts of playing in a commercial R&B format, Free reconnected with his roots in big guitar tones and epic soundscapes, and songs written from the heart and not for the charts. You can hear the exploration that culminates in Turquoise Blue on five previous studio albums, including the critically heralded Tattoo Burn, from 2017, as well as Micki Free—American Horse Live at Hyde Park, which captures a 2010 London concert that featured guest Bill Wyman and Native American dancers.

“I’ve grown and matured as a songwriter since my Shalamar days, and brought my blues-rock guitar playing, which has been my passion since I saw my first concert - Jimi Hendrix- front and center,” Free says. “With this album, I’ve been able to thread every element of my life and my playing together in a way that reflects my entire journey. I’ve kept it honest to the bone, so listeners can feel it, too. This album is, basically, Micki Free.

“Another standout track on the new CD is ‘World on Fire,’ a song definitely about the sign of the times. The music for the song started out as sort of homage to my buddy Carlos Santana, who I’ve jammed with many times in the last five years or so. I idolized him and Jimi Hendrix growing up as a boy. The lyrics again were inspired by current events during 2020-2021. I have my old bandmate Cindy Blackman-Santana, wife of Carlos Santana, on drums, Andy Vargas, lead singer of Santana, and Karl P. on percussion. I produced the track and played all the guitars.”

Turquoise Blue Track Listing and Credits
All songs written (except “All Along the Watchtower” by Bob Dylan), produced and arranged by Micki Free