Mitchell Cohen Talks About Looking For The Magic 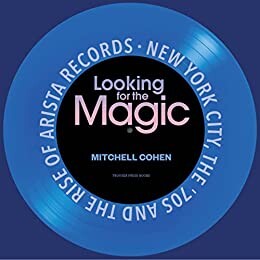 When most people think about the music business today, they think that it is still very much like how it was back in the 1970s and early 1980s: Lots of money being thrown around. Limos and private planes. Lots of publicity and adoring fans.

One of the handful of labels that were associated with that image is Arista Records. Mitchell Cohen worked at Arista during that time and saw how the musical sausage was made back in those days. Now, he has written a book about the view from the inside titled, Looking for the Magic.

The publisher says this about the book:

This cultural-historical remix presents a fresh perspective on Arista Records, how the label reflected its place and time: New York City in the 1970s and early 1980s.
Through interviews with dozens of artists and executives, music journalist Mitchell Cohen, who did A&R at the label, goes inside the business of making and marketing music during this vibrant and diverse period. Under Clive Davis, rock, pop, punk, jazz, R&B, disco, cabaret and Broadway were all represented on Arista. The label sounded like the city it was at the center of.
From its inception as a new entity built on the pop and soul foundation of Bell Records to signing groundbreaking artists like Gil Scott-Heron and Patti Smith to revitalizing legends like the Kinks and Aretha Franklin and up to the launch of its biggest star, Whitney Houston, Arista Records’ story has never been told like this.

Cohen sat with Boomerocity to chat about the book and his view of the music business. Articulate. Insightful. Informative. If you want the inside view of one of the legendary record labels during one of the most exciting times of its life, then you’ll want to watch this interview, below, as well as purchase Looking for the Magic – which you can do so by clicking on the book cover on this page.

The Boomerocity Interview With Mitchell Cohen