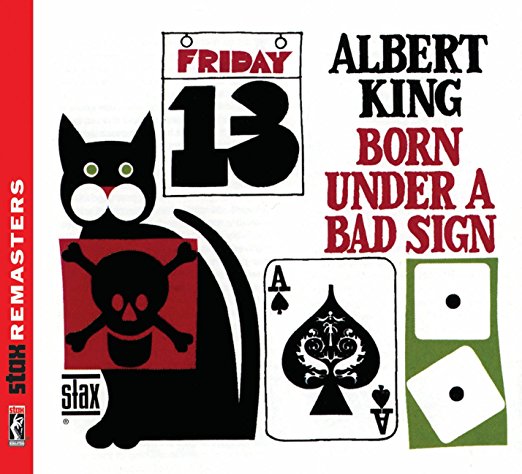 Any list of seminal 1960s electric blues albums is incomplete without Albert King’s Born Under a Bad Sign positioned near the top. The Indianola, Mississippi-born “King of the Blues Guitar,” who cut his professional teeth as a resident of the St. Louis suburb of Lovejoy, Ill., cemented his legacy with his Stax Records debut album. While he’d recorded for labels like Vee-Jay, Parrot and Bobbin, it was his chemistry with the Stax team — label executives Al Bell, Jim Stewart and Estelle Axton, songwriters Booker T. Jones and William Bell, and backing from Booker T. & the MGs and the Memphis Horns — that put King on the blues map.

The Stax Remasters deluxe edition of Born Under a Bad Sign has been released by Stax Records, a unit of Concord Music Group. Music historian Bill Dahl wrote the new set of liner notes.

King was influenced by pre-World War II bluesmen Lonnie Johnson and Blind Lemon Jefferson, and post-war artists T-Bone Walker and Howlin’ Wolf. He came to Stax by way of Al Bell, a Little Rock native who’d met King when he played shows in the area. King’s first Stax recording was Laundromat Blues, included on this album, backed by Booker T. Jones on piano; Duck Dunn, bass; and Al Jackson, Jr., drums; plus the Memphis Horns (Wayne Jackson and Andrew Love) and Raymond Hill (sax player on Jackie Brenston’s Rocket 88). The song had come by way of an unsolicited songwriting demo that Stax co-founder Estelle Axton correctly believed could be a hit for King.

Crosscut Saw is one of King’s best-known recordings as yet dated back to 1941 when Delta bluesman Tommy McClennan recorded it for Bluebird, and Willie Sanders & the Binghamton Boys cut it in ’63. A.C. “Moohah” Williams, a veteran DJ at Memphis R&B station WDIA-AM, brought it to King’s attention.

Booker T. Jones and Stax soul singer William Bell came up with the thundering bass riff that defined the title track Born Under a Bad Sign. The song notched #49 on the R&B chart in 1967, and was covered in short order by Cream on its 1968 Wheels of Fire album. Soon King himself was playing venues like the Fillmore Auditorium to young white rock audiences.

Another one of the signature tracks, Oh, Pretty Woman, written by WDIA DJ Williams, required the steady presence of Steve Cropper’s rhythm guitar to augment King’s lead licks. King received songwriting help from David Porter, on leave from his usual collaboration with Isaac Hayes, on Personal Manager, which was the B-side of the title track single.

Born Under a Bad Sign was also notable for its selection of covers. King gave the Jerry Leiber/Mike Stoller R&B standard Kansas City an urban blues treatment. He’s right at home with Fenton Robinson’s As the Years Go Passing By. Ivory Joe Hunter’s I Almost Lost My Mind is a rare King ballad with countrypolitan overtones and jazz flute, an unlikely showcase for his rich baritone.

For this special reissue Stax Records has reached into its vaults to provide previously unissued bonus tracks in the form of alternate takes of Born Under a Bad Sign, Crosscut Saw, The Hunter, Personal Manager and an untitled, never-before-released instrumental.

According to annotator Dahl, “Thanks to Born Under a Bad Sign, Albert King became a full-fledged blues luminary, masterfully bridging the gap between the Chitlin’ Circuit and the rock arena. He would make more great Stax albums, but he’d never top this one.”

Albert King will be posthumously inducted into the Rock & Roll Hall of Fame on April 18, 2013.

Down Don’t Bother Me

I Almost Lost My Mind

As The Years Go Passing By

The Very Thought Of You