Photo Brian Bowen SmithIf you’re a baby boomer and/or a music nut, you have heard of – and probably all about – the Beach Boys and the various members of the band. Of all the music they recorded, probably the most lauded LP was their ground-breaking “Pet Sounds” – largely written by the band’s co-founder, Brian Wilson, and released fifty-one years ago this month.

While I was researching for this article, I called up a music statistician friend of mine,
Steve Orchard of 101.5 The Frog in Kingsford, Michigan. He told me, “Brian was always considered the mastermind behind those guys (the Beach Boys). Pet Sounds debuted on May 28, 1966. It’s probably faired better over the years than it initially did. It only climbed to number ten. It spent thirty-nine weeks on the charts and it has been certified platinum. My guess is that it’s more than one million (in sales).” He later added, “The last time Rolling Stone did their top 500 albums of all time, they had it ranked at number two. That’s some pretty weighty company right there for that album. You can see that it certainly faired a lot better over the years than its initial chart position would indicate.”

Also chiming in with some input on the music legend was Boomerocity friend, Greg Harris, CEO of the Rock and Roll Hall of Fame.  He had th

“He is truly one of the greats! Top of mind about Brian Wilson: One of the greats of not just rock and roll but of all of twentieth-century music. Really incredible songwriting and also the ability convey a sort of sensitivity through sound as well as lyrics. Some of the most enduring songs of this century he is responsible for.

“It’s especially incredible that he made amazing, popular hits. His focused studio work on Pet Sounds and on Smiley Smile –

the genius of his ear and the creativity that got those sounds – just remarkable.”

“The fact that he continues to make great records and continues to be open to collaborating and working with so many other musicians is a testament to his creative ability and just massive impact.”

Greg continued by adding, “We do celebrate and honor the band at the museum. They have a very nice footprint in our main exhibition hall as fitting for their impact on rock and roll and the fact that they were just after the first pioneers.

“It’s amazing to have a writer in a group that reaches such great popularity early but, then, can also back it up over a long period of time. That’s really where they fit in, I believe, into the rock and roll canon and their impact and influence on so many others and their creativity.

“The whole election piece . . . they were inducted in 1988. Let me take a peek and see who else they went in with in ’88. Well, you know, they went in with the Beatles; with Bob Dylan. To be inducted in the same year as the Beatles, as Bob Dylan, as Lead Belly, Woody Guthrie, Les Paul, the Supremes, and the Drifters. It’s truly a testament to their stature and fitting. I think that every artist that I named would turn around and voice their admiration for Brian Wilson and the Beach Boys. I skipped over in that run Berry Gordy, Jr. was also inducted in that year. The architect of Motown. 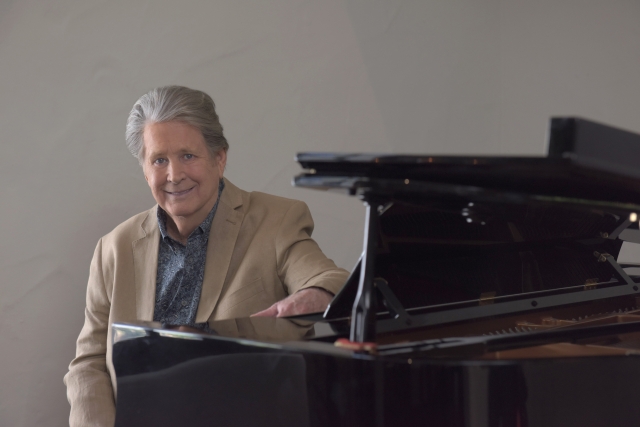 Photo Brian Bowen Smith“So, you’ve got the Beatles, you got Dylan, (and) the Beach Boys. That’s pretty good company. That’s the big Hall of Fame story there is to look at them in the context of those people as – it’s not by accident that they went in all together. Their impact and their influence has been massive.”

Fans already know that Wilson is a tough interview. He’s not rude. He’s just a man of very few words as compared to his prolific and genius-laden musical productivity. His reputation is that his answers as short and to the point and it’s not unusual for him to stand up and walk out of the interview when he believes it’s completed. Again, he’s not being rude, it’s just how he rolls.

Such was the case when his publicist called me for our interview. As you will see, his answers were short and when he was done, he was done. And that’s just fine with us because it’s not every day that one gets to spend a few minutes on the phone with the likes of Brian Wilson.

Our chat was to talk about his current tour that’s promoted as being the final Pet Sounds tour. I asked Brian why this was the case.

“Well, we toured the world on a world tour so we’re just about ready to wrap up.”

As for what fans can expect from one of the shows on this tour,

“Well, they can expect Pet Sounds and a lot of Beach Boys classics!”

I interviewed Jim Peterik a couple of years ago and he was so stoked to have been privileged to work with Brian Wilson on his last album. Obviously, many people look up to Wilson as a real mentor. I asked Brian who he would like to work with in the future.

And what kind of project would he want to work on with him?

When I asked who was commanding his attention in the music business, Wilson was blunt.

“Nowadays? Ah, none. I haven’t been listening to any of the music because none of it’s good.”

With up and coming artists emulating the classics, I asked Brian if he listening to any of those people?

“Yeah, I’ve listened to quite a few. I really like that kind of music!”

Anybody in particular who stands out?

With such a prolific body of work already to his credit, I asked what would Brian still like to accomplish in his career.

“Me? I would like to accomplish a rock and roll album.” 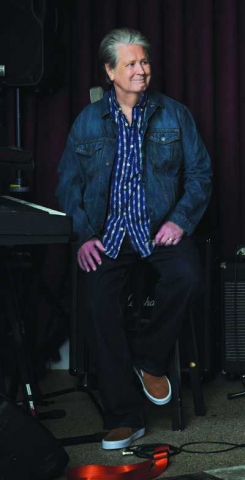 With his answer giving the impression that such an album may already be in the works, I asked if that was the case.

And when will we be able to hear it?

Wilson has been about his personal battles and spoken out so much about it, which is very brave. When I asked if there is a particular story from anyone whom his story has helped, he replied, “No, not really. No. No.”

What does Brian Wilson love most about life these days?

Shifting gears (and being aware of his past battles with record labels), I asked the rhetorical question: if he were made Music Czar, what would he do to fix the music business or does it even need fixing?

“Well, I think people should never take drugs, you know?”

What about the industry’s business model?

“I can’t answer that question.”

Wrapping up our chat, I asked the icon two final questions: What’s on his radar for the next year and how did he want to be remembered:

“A rock and roll album and maybe another tour. I want to be remembered as a good singer. Thank you for the interview.”

As I said: short and to the point and when he was done, he was done. No harm, no foul and still feeling good vibrations.

Keep up with Brian Wilson and his upcoming tours and projects at BrianWilson.com.