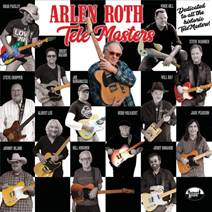 “This was such a rewarding experience for me to make,” says Roth about the new album. “I got to do some Telecaster duets with the best of the best when it comes to Tele playing. This album is dedicated to the great ‘Tele Masters’ of the past: Albert Collins, Danny Gatton, Mike Bloomfield, Roy Buchanan, Clarence White, Roy Nichols, Don Rich, Jimmy Bryant, Luther Perkins, Muddy Waters and so many more.”

Enlisting the support of so many great guitar players on Tele Masters often just involved reaching out to some of Roth’s many friends and admirers. “When my manager called and asked if I’d be interested in doing this, I quickly replied, ‘Count me in, man!’,” enthused Steve Wariner. “I’ve always admired Arlen and loved his playing. He’s always been so innovative.” Added the legendary guitarist Steve Cropper, “It’s fun to hear him play; he’s awesome!”

The mix of songs included in the repertoire of Tele Masters features everything from blues, rock, pop and country classics (“Remington Ride,” “Key to the Highway,” “Rumble,” “Promised Land,” “Satisfied Mind,” “Mrs. Robinson,”) to timeless chestnuts (“Ghost Riders in the Sky” and “Tennessee Waltz") and a number of sizzling original instrumental workouts (“Bunky,” “Roadworthy,” “Funky Mama,” “Tuff Tele” and “A Minor Thing”). Of special note is the track “Joe’s Blues,” a tribute to the great Albert Collins, which features the triple-threat guitar assault of Arlen Roth, Joe Bonamassa and former Allman Brothers Band guitarist Jack Pearson.

Guitar legend Arlen Roth is considered one of the most influential guitarists of all time, and during the course of his 45+year career has toured the world and recorded with an amazing list of artists, including Simon and Garfunkel, Bob Dylan, John Prine, Phoebe Snow, Levon Helm, Ry Cooder, Eric Andersen, Dusty Springfield, Janis Ian, Don McLean and The Bee Gees, among others. His teaching and creation of Hot Licks Video pioneered music and guitar education all over the world, with his videos having sold in excess of 2.5 million copies. His current online lessons and blogs for Gibson.com have over 1 million followers. Arlen was also the man behind the legendary blues film, Crossroads, creating the guitar parts, directing the guitar scenes and working alongside fellow guitarist Ry Cooder and actor Ralph Macchio during the film’s production. He was voted in the “Top 50 Acoustic Guitarists of All-Time” by Gibson.com and in the “Top 100 Most Influential Guitarists of All-Time” by Vintage Guitar Magazine. He has eight best-selling books to his credit, and his book, Hot Guitar, is a compilation of 10 years of his wildly popular column for Guitar Player Magazine.

Roth’s first album Guitarist, won the Montreux Critics Award for “Best Instrumental Album of the Year” in 1978, and his All Tricked Out! album (2012) garnered four Grammy nominations. His Slide Guitar Summit CD was similar in approach to his classic and legendary album, Toolin’ Around (1993), which featured duets with guitar greats such as Danny Gatton, Duane Eddy, Brian Setzer, Duke Robillard, Albert Lee, Sam Bush and Jerry Douglas, and which also became a film documentary. He followed up that album with Toolin’ Around Woodstock, with Levon Helm, Sonny Landreth and Bill Kirchen.
Arlen Roth is also the founder and CEO of the new “International Guitar Hall of Fame and Museum.”