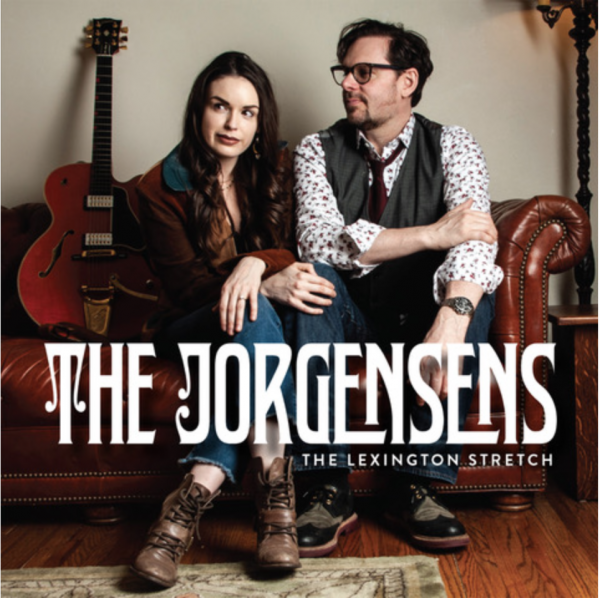 Sometimes, Boomerocity is a little late to the party when it comes to “discovering” talent. When we do (and while mildly chagrined to be tardy), we’re almost always pleasantly surprised by our discoveries.

Such is the case with a wonderful husband/wife team, The Jorgensens (Brianna and Kurt), from the great state of Minnesota. We became aware of them with the release of their new studio album titled THE LEXINGTON STRETCH that comes out this month.

Their music is as entertaining as it is biographical of their life and love for each other. Starting out working with one another in 2014 in St. Paul. Brianna says, “We met in St. Paul at his house and I played through some of my original material. As soon as he started playing along with me the music instantly clicked. There’s no denying that it was a musical match from the get-go, and we became fast friends. Every week we’d get together and cut tracks at his studio, and in the process shared details about our lives. We saw one another through some tough times. It was a moment in time where Kurt was getting divorced, and I was getting sober. What a pair we were. The writing and recording gave us an out from each of our realities. Detaching from the drama, we were able to place our energy into creating something good. As I approached the end of the recording process it occurred to me that my time with Kurt was possibly coming to a close, and it saddened me. Not only musically did I love working with Kurt, but I’d grown to love Kurt as my near and dear friend. I think he was the first person I’d ever been honest with in my life, and I didn’t want the collaboration to end. Kurt felt the same way, and we decided we were going to write, produce, and record an album together, while playing acoustic gigs as a duo. We completed our first album titling it ‘Love Wins’ because in the process we fell in love with each other romantically.”

Blues and Americana enthusiasts will love this album. The recording quality is top-shelf as is the musicianship, songwriting, and vocals launching the well-written songs on “The Lexington Stretch” – all, of which, are originals with the exception of the Willie Dixon tune, “If the Sea Was Whiskey” (Kurt has been a Dixon fan since the age of 15).

This really is a “must-have” CD if you’re a blues and/or Americana fan or just are heavily into human-interest stories via song. You can order it now by visiting http://www.thejorgensens.com/.