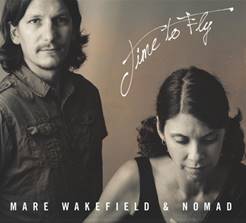 Acclaimed Americana/folk duo Mare Wakefield & Nomad announced a January 26, 2018, release date for their new CD, Time to Fly, on the Maresie Music imprint. The two will celebrate the new CD with a special show at The Country in Nashville on Wednesday, January 17 at 9 pm (www.thecountrynashville.com). They’ll also be performing songs from the new disc at several private showcases during the upcoming Folk Alliance Conference in Kansas City, Missouri, in February.

At the same time, it’s been announced that one of their original songs is going to be featured over the opening credits of a Lifetime TV movie, “A Very Merry Toy Store,” premiering November 26 at 8 pm Eastern (7 pm Central). It’s a holiday song called “Candles & Carols” that is not on the new album.

Listen to, “Breathe,” the song that Mare Wakefield says “got us into the Kerrville Folk Festival the first time, and into the Falcon Ridge Folk Festival in New York: www.marewakefield.com

“The song has elements of grief and recovery, and lessons gleaned from failed relationships. It’s one of the more auto-biographical songs on the record, and yet when we play it live, it’s also one of the songs that audiences respond to the most.”

“We are so lucky to count these musicians among our friends, and to be able to assemble this group all together, same place same time, to come up with parts and make a cohesive sounding record,” declares Nomad Ovunc. “They really understand Mare as a writer and they get what we’re trying to do with each song. Everyone played really well -- from the drum sound to the guitar tones to the chord changes and the melodies. And Mare’s vocal delivery, everything sounds so good. All the musicians bonded and played together like a band. We created something together as a team. And I’m so grateful we were able to record in our own home studio, too. We were so RELAXED while making this record - and I got to play my own piano!!  It was a beautiful experience being in a full band, tracking everything live. We had the luxury of time; we could go as slow as we needed to in order to get each song where it needed to be.”

While all the songs on Time to Fly are originals, with perspectives and experiences delving from Mare Wakefield’s own life and background, they are universal in their appeal because of her innate songwriting talent that makes them instantly accessible.

“We picked “Time to Fly” as the title track because of the message in its title, and how it can mean so many different things,” says Mare. “To me, the story of the lyric is about letting go of someone who’s died. But I had an audience member tell me the song was perfect for her and her teenage daughter who was about to go off to college – a different meaning of ‘time to fly’. I even got a note from someone who works at a rehabilitation center for birds of prey, who thought the song captured perfectly the emotion of caring for a wild bird, and then releasing it.  So many different possible interpretations of the lyric! We knew we wanted to keep this track just us, so that the listener could be drawn in by the quiet intimacy.”

Another track that has a lot of personal appeal to Mare and Nomad is the opener, “Real Big Love.” Says Mare: “I love how this track moves.  The drum groove and the super fun accordion solo always make me smile. We debated making this the title track of the whole record – since so much of our music and our act is really inseparable from our relationship and the love we feel for each other.”

“Bernice & Bernadette” is a song with a deep family background for Mare. “This might be my favorite track on the entire record,” she explains. “My grandmother Bernadette had a close friend named Bernice. The two women were friends since childhood and stayed close even after my grandmother married and started her family. Bernice never married, and in her will she left everything to my grandmother’s children. I had heard many ‘Bernice and Bernadette’ adventure stories growing up, but it wasn’t until just a few years before my grandmother died that I got a deeper glimpse into that relationship. ‘We loved each other,’ my grandmother said to me one afternoon. ‘I know what people used to say about us. And, I suppose, they were right.’ After my grandmother died, I inherited her writing desk and found letters she had saved from Bernice. These letters, expressing a lifetime of love, really guided my hand in writing the lyric for this song.”

“Daddy was a seeker,” says Mare Wakefield about her upbringing. “Eventually he became a Salvationist minister. Mama was some kind of gypsy, loving nothing more than a long, clear stretch of open highway.”

Mare was born with wanderlust embedded in her DNA, and lived in eight different places by the time she was 10 years old. “It was a roller-coaster way to grow up, but my brother and I learned to fit in fast,” she says. “We had our rural Wisconsin accents down in two weeks flat. And eighteen months later we were drawling like native Texans.”

For Turkish-born, German-raised Nomad Ovunc, the journey was equally varied. His musical education began at the exclusive Istanbul State Conservatory and continued when he was awarded a scholarship to Boston’s prestigious Berklee College of Music. Nomad has a gift for musical arrangements and carries a full arsenal of classical, pop and jazz chops at his piano-playing fingertips. In addition to working with Mare, the versatile pianist and composer has designed sound for film and TV, and has had pieces performed by symphony orchestras and in Boston’s legendary Fenway Park.

Versatility and love for travel is evident in Mare and Nomad’s music. Listeners roam through Arizona deserts, Oklahoma oil fields and South Dakota plains, with side-trips to ancient Babylon and the streets of Amsterdam. The journeys go inward too, exploring hope and heartbreak, and the occasional whiskey-soaked barroom brawl. Story and song are woven seamlessly together by Mare’s intimate delivery and Nomad’s exquisite melodic arrangement. The pair has also been honored by the International Songwriting Competition and the Great American Song Contest. They continue their journey by touring fearlessly, leaving strains of folk tunes and sweet piano melodies echoing down the highway.