Chicken Soup for the Soul: The Story Behind The Song 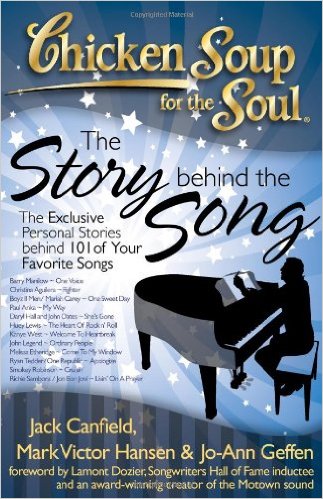 Have you ever listened to a song and wondered what compelled the writer of that song to write it? I know I certainly have. Well, I just finished a book that tells the stories behind a long list of popular songs that have entertained us over the years. The book is entitled Chicken Soup For The Soul: The Story Behind The Song. This captivating book is the successful first work authored by legendary publicist and public relations guru, Jo-Ann Geffen.

Geffen’s book covers the stories behind 101 different songs that span the 60’s thru today and covers many genres of music. It’s highly unlikely that you won’t find a song that you have had wondered what the story behind the song was.

For me, songs like Iron Butterfly’s In-A-Gadda-Da-Vida, Jim Croce’s Operator, or Heart’s Dog and Butterfly have always intrigued me. What drove Doug Ingle to string together the unintelligible words that made up the title of one of the most iconic songs of the 60’s? Who was the girl that Jim Croce was trying to call that he was singing about in Operator? I loved the acoustic guitar work on Dog and Butterfly but wondered what on earth Ann Wilson was talking about in her lyrics.

My questions are answered and curiosities satisfied in Geffen’s book. Also in the book, you’ll read incredible, inspirational and thought provoking stories behind the other 98 songs. Songs like Shining Star by Earth, Wind and Fire (as told by Philip Bailey); At Seventeen by Janis Ian; Saturday In The Park by Chicago (as told by Robert Lamm); and Midnight Blue by Melissa Manchester. Other Baby Boomer favorites include She’s Gone by John Oates , Lust For Life by Iggy Pop and Cruisin’ by Smokey Robinson are also covered in this fun and easy to read book.

As I highlight in my interview with Jo-Ann Geffen, Ronald LaPread’s telling of the circumstances and events behind the Commodores’ hit song, Zoom, is guaranteed to bring tears to your eyes. You must buy the book to get the whole story. However, I will say that this story, along with Jewel’s commentary about her song, Hands, is one of the most heart rendering, tear jerking tales you’ll read in this book. I defy any of you to read these tales and not be changed after doing so.

Ms. Geffen laid out the book in a very logical and methodical way: the songs are in order of the last name of the writer of the song who is telling the story. Easy, huh? So, if you want to learn about what led Neil Sedaka to write Breaking Up Is Hard To Do, you’ll quickly find the song in the S’s, right after John Sebastian’s talking about Do You Believe In Magic. It’s also right before Carly Simon detailing the unique life of the song Let The River Run.

Although there aren’t many songs from the newer artist that I have previously listened to, reading the stories behind songs like Christina Aguilara’s Fighter or Destiny Child’s Say My Name have changed all of that. I now have a greater appreciation for genres of music that, up till now, I would’ve never considered listening to.

Chicken Soup For The Soul: The Story Behind The Song, is published by Chicken Soup for the Soul Publishing, LLC, and can be ordered on this page or at your favorite local bookstore. While you’re at it, pick up an extra copy for a friend. They’ll love you for it!