Whenever I learn of an artist that is new to me, more often than not, its discovery is serendipitous in every sense of the word. Such was the case when I was turned on to the young, beautiful, and extremely talented Samantha Fish.

I was at my cousin’s farm (probably rummaging through their cabinets, seeing if they had something to eat) when his wife asked if I had ever heard of this girl. I turned and looked at the TV screen and there was Ms. Fish, rockin’ away on guitar, playing blues as if it was imparted to her at the crossroads.

I became an immediate fan.

Younger than my daughter but musically wise well beyond her twenty-something years, Samantha is definitely someone that blues fans will be keeping their eyes and ears on for many years to come.

Whether one leans towards the blues, opts for Americana or ignites some special fervor by playing with a garage band, there’s a common bond that suggests a reverence for the roots. Looking back towards an earlier template — no matter what the genre — proves the point that appreciating what came before can be a stepping stone for what comes next.

Samantha Fish knows that all too well, and it’s been evidenced in the music she’s made her entire career. While she’s well known as a purveyor of blues, having been lauded by such legends as Buddy Guy, the Royal Southern Brotherhood and Luther Dickinson, her real love is simply raw, scrappy rock and roll. “I grew up on it,” she insists. “Working with Luther on my last album further instilled that spirit in me. It made me realize just how much that basic, unfettered sound means to me, and how well it ties into soul music, R&B, country and so many other forms of music that are essential even today.”

It’s little wonder that when it came time to record her new album, Chills & Fever, Fish set her sights on Detroit, the home of soul, Motown, legendary R&B as well as the much edgier rock-n-roll of Iggy Pop, Jack White, and The White Stripes. It was there that she joined forces with members of the Detroit Cobras, a band whose insurgent ethic has made them darlings of the Midwest punk/blues scene. The two entities — which included Joe Mazzola on guitar, Steve Nawara on bass, Kenny Tudrick on drums with Bob Mervak on keys, and the New Orleans horn section featuring Mark Levron and Travis Blotsky on trumpet and saxophone — bonded over a common love of classic soul and rollicking rhythms, so much so that the results testify to a seemingly timeless template. Covering songs from the ‘60s and ‘70s — indelible melodies from the pens of legends like Jackie DeShannon, Jerry Ragavoy, Bert Berns and Allen Toussaint — along with producer Bobby Harlow (King Tuff, The Gap Dream, White Fang) a member of the Detroit band The Go, which also featured Jack White prior to his stint with the White Stripes. With that as her starting point, Fish and the band then created an album that’s best described as a pure slab of rocking rhythm n’ blues.

“I listened to a lot of soul music, and I dug deep into people like Otis Redding and Ray Charles,” Fish recalls. “I was also influenced by people like North Mississippi’s R.L. Burnside and Junior Kimbrough. It’s a less restrained style of music than the sound people may be used to hearing from me, it’s definitely a different facet of my personality.”

The fact is, Fish has never been bound by any expectations whatsoever. Growing up in Kansas City, she switched from drums to guitar at the tender age of 15. She spent much of her time in local watering holes listening to visiting blues bands. Samantha caught the attention of Ruf Records. The label subsequently released her album, Girls with Guitars, which found her co-billed with Cassie Taylor and Dani Wilde. That led to her forming her own trio and recording three more albums, Runaway (2011), Black Wind Howlin’ (2013) and Wild Heart (2015), as well as reaping an award for Best Artist Debut at the 2012 Blues Music Awards in Memphis. Along the way she found herself working with other artists as well — Jimmy Hall, Devon Allman, and Reese Wynans, among them.

Still, nothing she’s done before can prepare her faithful fans and followers to the seminal sounds of Chills & Fever.

Pre-order now. While you’re at it, order her previous seven CDs. You’re going to, anyway.

Keep up with Samantha at: 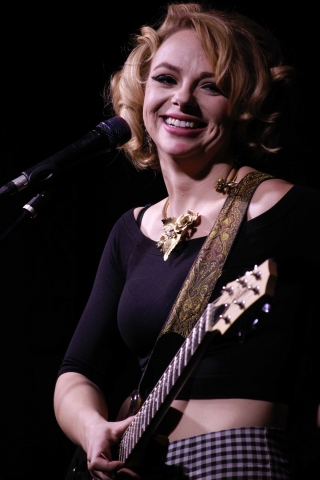