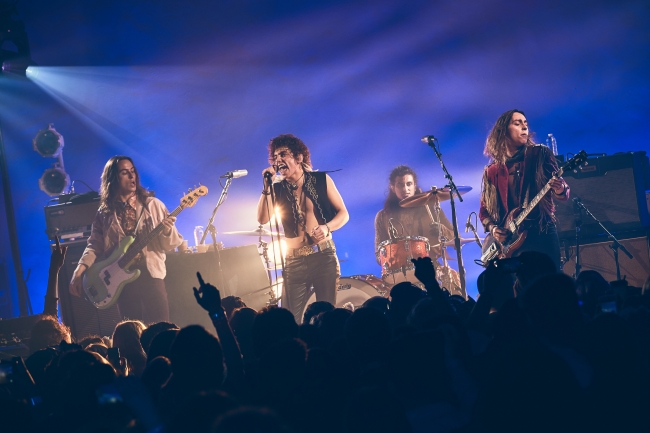 Photo by Koury AngeloThere is hope for rock and roll, after all.

I say that because I just saw a young band of four young men who bring fresh rock as it used to be to a mostly young audience who likely have never experienced it.

The band is called Greta Van Fleet and I can some up my feelings of the show with: Wow. Un-freakin’-believable.

I’ll admit: I’d heard of them but never really paid any attention to them until recently. That was most definitely my loss. I typically ignore what I perceive to be hype and, in this particular case, I was wrong in thinking it was hype.

These guys are really, really good!

GVF is made up of three brothers and a friend: Twins, Josh (vocals) and Jake (guitar) Kiszka, their younger brother, Sam (bass and keyboards), and Danny Wagner (drums).

Their show consisted of twelve songs (including two for their encore) from their initial EP, Black Smoke Rising, and subsequent albums, From the Fires and Anthem of a Peaceful Army. The only exception being their cover of the John Denver song, The Music Is You. The majority of the near-capacity crowd knew the tunes and often sang along.

What struck me about GVF and their show is that they’re bringing back true rock and roll the way it has needed to be brought back since the late 70’s: Fresh and a lot of real, true fun. I dare say that they’ve bridged the musical gap between baby boomers and millennials. Seriously.

How they’ve done this is harder to analyze and quantify than one would think. As of this writing, I would describe the band, their performance, and their songwriting as ninety percent Zeppelin, eight percent Black Crowes, and two percent Rush. I’d also say that, from a performance perspective, they’re a musical holograph of Zep, The Stones, and the Crowes, and Queen.

I say this because, vocally, Josh is definitely the current age’s Robert Plant with a dash of Geddy Lee thrown in. That said, his range is amazing and, while the temptation is to compare him to Freddie Mercury, Josh’s voice is distinctive. His stage presence is a fun blend of the prancing of Jagger, the posturing of Plant, and the boldness and brashness of Freddie Mercury.

Jake’s guitar work is easy to compare to Jimmy Page. I might even say that he is also a lot like Rich Robinson. But, you know what? This guy is distinctive. Watching him play and perform, I couldn’t help but notice how professional he was in addition to being entertaining. Like his bandmates, this guy is talented well beyond his years.

Sam, like John Paul Jones, mans the bass and keys. Unlike Jones, he commands attention in the way Glenn Hughes does with any band he plays in.

Danny Wagner is unlike any drummer his age that I’ve seen in recent years. Like Josh, Jake, and Sam, he is talented way beyond his years. I would say that he what you would get if you morphed the late Keith Moon with the alive-and-well Joey Kramer.

I can’t stress it enough: These guys have what it takes to be around, entertaining us, for many years to come. They’re talented songwriters, performers, and they’re consummate professionals. I’m looking forward to their new album next year. I am also looking forward to seeing every show of theirs that I can. Hopefully, Boomerocity will be interviewing them in the future, as well. Stay tuned.