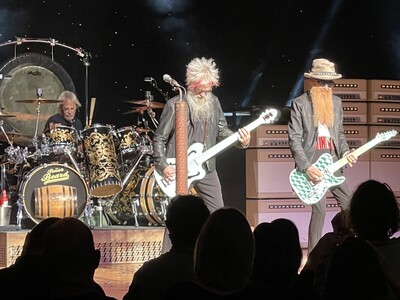 For various reasons, I just never made it to a ZZ Top show until last night – thanks to the Reverend Billy F. Gibbons and his team.

The entire evening was fantastic and well worth the five-hour round trip from my hillbilly haven to the beautiful Tivoli Theatre in downtown Chattanooga.

The opening act was Tim Montana. Though I had heard of him, I’d never listened to his work. Boy, was that a mistake! I didn’t know what I’d been missing! I will be checking this boy out much closer. He and his band are phenomenal. So much so, that I’d go way out of my way to catch one of his gigs.

The band started punctually and quickly had the East Tennessee crowd eating out of their talented hands. Check him out for yourself by watching the music video on this page.

ZZ Top hit the stage after a brief intermission after Montana’s set. The crowd warmly welcomed Billy, Frank, and replacement bassist, Elwood Francis. Elwood is no stranger to Top fans as he served as Gibbons’ guitar tech for thirty years. When Dusty Hill passed away this past July, Elwood stepped up to the challenge and is filling Dusty’s shoes admirably.

I’m sure Dusty is smiling his approval from above.

ZZ Top kicked out many of their beloved hits with some playful banter from time to time from Reverend Billy. Switching iconic guitars a few times through the set (including breaking out the legendary white sheepskin guitars), Billy and Elwood played every hit note-perfect with Frank Beard consistently providing his signature driving rhythm from his massive whiskey barrel themed drum set.
At the end of the set, the crowd was hungry for more, and the band obliged with a three-song encore (Brown Sugar, La Grange, and Tush), leaving us all blissfully exhausted from an amazing night.

I want to inject a special story here that speaks highly of Billy Gibbons.

Two young men sat in front of me at the show. They were about 30 years old and just having a blast. Before ZZ Top hit the stage, I was talking to them. One of them said that he met Billy in a bar the night before and they visited for quite a while. Long story short, after the young man told Billy that he had been a fan for years and hope to catch his show someday, Billy said, “I’ll have tickets waiting for you. Enjoy the show.” That guy and his friend were so over the moon to not only have met one of their idols but that Billy also invited them as a guest to the show. I know it was no big deal to Billy, but it meant the world to that young man and his friend. I’ve always thought highly of Billy Gibbons. Hearing those young men’s stories raised my opinion of him by orders of magnitude.

My friends, we’re losing our favorite artists slowly but surely. Sure, we have their albums that we can listen to long after their gone. But there’s nothing like catching them live, delivering their hits to perfection still. Splurge. Buy tickets to see your favorite artists (one more time for many of you). Their music and their performances will bring yet more joy and appreciation and give you memories to last you for the rest of your days.