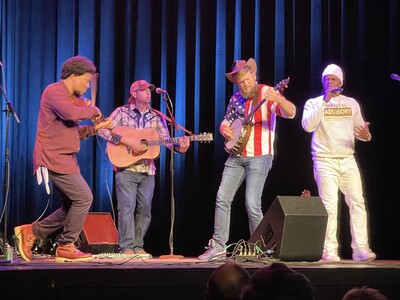 I went to last night’s concert because of my interview with band members Rench and R-Son back in December (here). As I said in that interview, I first heard of Gangstagrass shortly before that interview and that, prior to that, I was not a hip hop fan and I had only a healthy appreciation of bluegrass. When I was turned on to Gangstagrass, I became an instant fan of these guys. After the interview, I was invited to attend last night’s show in Knoxville.

These guys are highly skilled at their musical craft. More importantly, these three African American men and two white men are brothers at heart. Not contrived. Not pretending. Not putting on a unity show. These guys exhibited genuine brotherly love for one another. It was obvious and palpable.

Gangstagrass performed songs that did not spew hate or anger. Honesty? Sure. But there is nothing about their music that provoked hostility. No, not at all. It prompted thought and unity.

I’m a sixty-two-year-old white guy; born in the south, raised in the west, and now happily reside back in the south. While I’ve personally not witnessed much in the way of racism in my life, I also have never witnessed this much unity on stage and in the eager, predominately (if not totally) white, Knoxville crowd. This same crowd cheered, whooped, danced, and stood for most of the hour and a half show.

I’m sick of the division in our country today. I know that this isn’t what our founding fathers – nor civil rights leaders such as the late, great Dr. Martin Luther King, Jr. – fought for. What they envisioned was, in my opinion, realized last night.

Music makes the world go around. In my opinion, I sincerely believe that men and music like that of Gangstagrass can genuinely unify it.

I will be seeing Gangstagrass, again. I encourage you to attend one of their shows if you get the chance.

Visit Gangstagrass.com to keep up with the band and to see when and where they will be performing near you.