Coming Up In Knoxville: An Evening with Andy Wood and Mark Lettieri 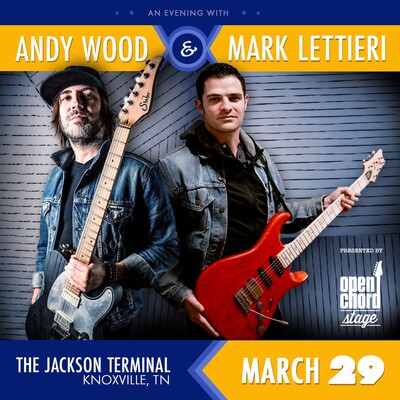 Boomerocity can guarantee you that you will not be more thoroughly entertained if you're a fan of great guitar work. Boomerocity heard Joe Bonamassa say with its own two ears that Andy Wood is one of the finest guitarists on the PLANET . . . and he wasn't exaggerating.

GO TO THIS SHOW

Here's some info on Andy and Mark Lettieri

ANDY WOOD is recognized as part of the forefront of this generation’s top influential guitarists.

Currently touring as a solo guitarist and mandolinist along with working on a host of additional musical projects, Andy is also performing live with his own band promoting CAUGHT BETWEEN THE TRUTH AND A LIE, the double album which showcases his vast musical influences and abilities.

Andy has toured professionally with a wide range of acts, including most recently Gary Allan, LOCASH, Rascal Flatts, Scott Stapp, and Sebastian Bach. Looking for an outlet for styles other than hard rock, Andy also released his debut solo album A DISCONCERTING AMALGAM. This instrumental record covers a broad range of genres including fusion, rock, metal, and acoustic bluegrass. Andy Wood is known for blurring the lines of preconceived genres.

Andy spent most of his childhood playing and competing in bluegrass festivals. Touring the bluegrass circuit with his cousin and grandfather provided Andy with the necessary exposure that helped refine and sharpen his skills. Andy and his cousin held various state championship titles.

At the young age of sixteen, Andy finished second in the WORLD CHAMPIONSHIP MANDOLIN CONTEST in Winfield, Kansas. All of this was accomplished before Andy discovered the world of electric guitar at the age of eighteen.

Fast-forward a few years. Andy’s curiosity and appreciation for music drew him into the world of electric guitars. The new instrument was familiar due to his experience with acoustic instruments, but at the same time, allowed him to manipulate his sound in ways never before possible. He began studying the styles of Nashville session players such as Brent Mason and Albert Lee.

It was not long after Andy had immersed himself in new styles such as jazz, swing, fusion, and rock. Andy began to study other guitar greats such as The Dixie Dregs, Eric Johnson, Eddie Van Halen, Joe Satriani, and Steve Vai. The young guitarist began incorporating their influences into his own style.

At the age of 22, Andy was drawn back to competition in the form of GUITARMAGGEDON, a guitar contest sponsored by Guitar Center. Andy was a face in the crowd of 3,400 other contestants, but he made his presence known by being crowned champion of this prestigious tournament.

Not long after winning Guitarmaggedon, Andy became a founding member of the rock group DOWN FROM UP. They have toured with Seven Dust, Drowning Pool and 10 Years.

As Andy climbs to greater and greater heights, his technical proficiency and tasteful chops makes Mr. Wood a force to be reckoned with, and a name you will not forget. If you find yourself “Caught Between The Truth and a Lie,” you’ll need all the “Charisma” you can get your hands on!

Mark Lettieri is a guitarist, composer, producer, and instructor based in Fort Worth, TX. Proficient in a multitude of styles, he records and performs in virtually every genre of popular music with both independent and major-label artists. He also composes and produces original instrumental music under his own name.

Born in the San Francisco Bay Area, Lettieri came to Texas via Texas Christian University (TCU), studying advertising and public relations, and competing in track and field. A passionate guitarist since middle school, he began his music career in the Dallas/Fort Worth Metroplex area upon graduating from TCU.

Playing in the vibrant Metroplex gospel and R&B scene led Lettieri to join jazz/world group Snarky Puppy in 2008, where he contributes as guitarist, as well as arranger and composer. His work with group has resulted in four GRAMMY Awards: Best R&B Performance for "Something" feat. Lalah Hathaway in 2014, and Best Contemporary Instrumental Album (Sylva in 2016, Culcha Vulcha in 2017, and Live at the Royal Albert Hall 2021). Snarky Puppy tours constantly, having performed on every continent except Antarctica.

In 2018, Lettieri joined up with Vulpeck-produced group The Fearless Flyers, featuring Cory Wong and Joe Dart of Vulfpeck on guitar and bass respectively, and drummer Nate Smith (Chris Potter, Pat Metheny). The quartet has four releases to date: The Fearless Flyers (2018), The Fearless Flyers II (2019), Tailwinds (2020), and Live at Madison Square Garden (2021).

Lettieri recently teamed up with Paul Reed Smith Guitars to create his signature model electric guitar, the Fiore, released during Winter NAMM 2021. He serves as a demonstrator and clinician on behalf of PRS and other endorsing brands.

He resides with his wife, daughter, and two cats.