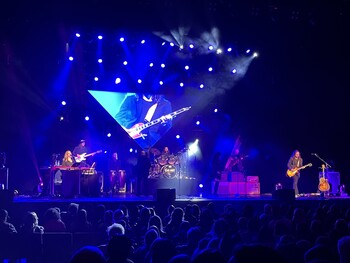 More about that in a moment. I want to fill in the uninitiated about who Black Jacket Symphony is. Their website, BlackJacketSymphony.com, says it best:

“Remember putting on an album and listening from start to finish? Relive that moment with a live concert experience unlike any other as The Black Jacket Symphony recreates a select classic album live in its entirety—note for note, sound for sound—plus a full set of greatest hits from the evening’s artist. Over the past thirteen years, the Black Jacket Symphony has performed over 40 classic rock albums, bringing an incredible night of entertainment to over a million music lovers across the US. The group of hand-picked musicians changes based upon the album being performed—and no sonic detail is overlooked, with the musicians doing whatever it takes to reproduce the album. It’s a full night of rock and roll magic—plus a visual experience unlike any other. Fans across the country flock to their shows—and once you see one, you won’t miss another!”

I’ve seen BJS perform eight times. Last night was the first time I’ve seen the group perform anything since October 2019 at Knoxville’s Tennessee Theatre (1631 seats). I keep mentioning seat totals because I want to drive home the point that this group’s devoted following continues to grow. Last night’s show was a near sell-out.

I last saw BJS perform Rumors in October 2014. While that show was great, last night’s performance was orders of magnitude above and beyond the 2014 show. Musicianship and vocals were stellar. Lights and visuals were eye-poppingingly magnificent. Sound mixing: Perfect. Acoustics of the venue: Stellar.

In other words, the show was well worth the price of admission and the time invested to sit and enjoy. I'll go a step further and say that this was their best performance I've seen to date and look forward to seeing many more.

Let me be clear: BJS isn’t a glorified cover band trying their best to cover classic rock hits. This troupe is made of up seasoned professionals who nail each song note-for-note.

Since the likelihood of catching a reconfigured Fleetwood Mac now since the passing of Christine McVie is slim to none, catching Black Jacket Symphony’s treatment of Rumors is definitely worth pursuing.