Aldous Huxley once said, "I'm afraid of losing my obscurity.  Genuineness only thrives in the dark. Like celery."  A friend recently remarked that he didn’t know “where the hell” I got many of my albums. He said he had never heard of most of the artists and/or the singers, so I think he was perplexed as to why I ever bought them. And that is true. Most are obscure artists, sadly through no fault of their own.  I had never heard of most of the artists when I was attracted to the album’s jacket art, usually in a thrift store. And oftentimes I never get around to listening to the record within, only because I don’t take the time and because I bought the albums solely because of the jacket artwork. Here are a few more jacket art “favorites” from my collection. As I have noted before, it’s hard to pick favorites because, like the music within, it depends on the mood you’re in as to what you like in a particular moment. But perhaps my bringing them to your attention might lessen their obscurity....perhaps. 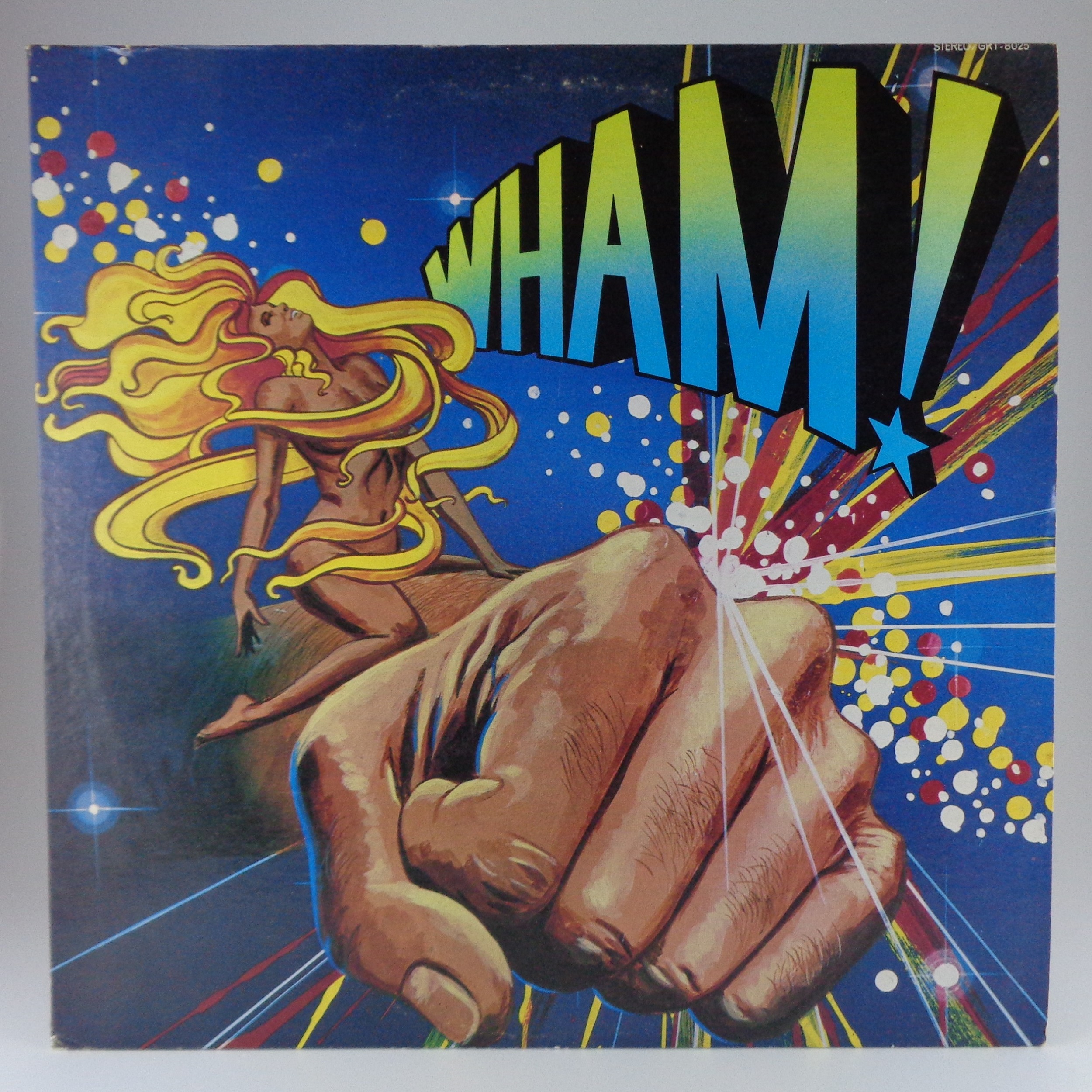 If you are thinking the pop sensation of the 1980s, you would be wrong. This record was released by GRT Records, Inc., in 1978. Who knew there was room in the world for more than one Wham? This group featured Mitch Vuksanovitch on lead vocals. I couldn’t find out anything online about him. All that appears left of the group is this killer jacket art and one forgotten vinyl record. Sadly, the liner notes fail to give credit for whoever created this great artwork. A naked gal and Batman-style graphics - who could ask for more? 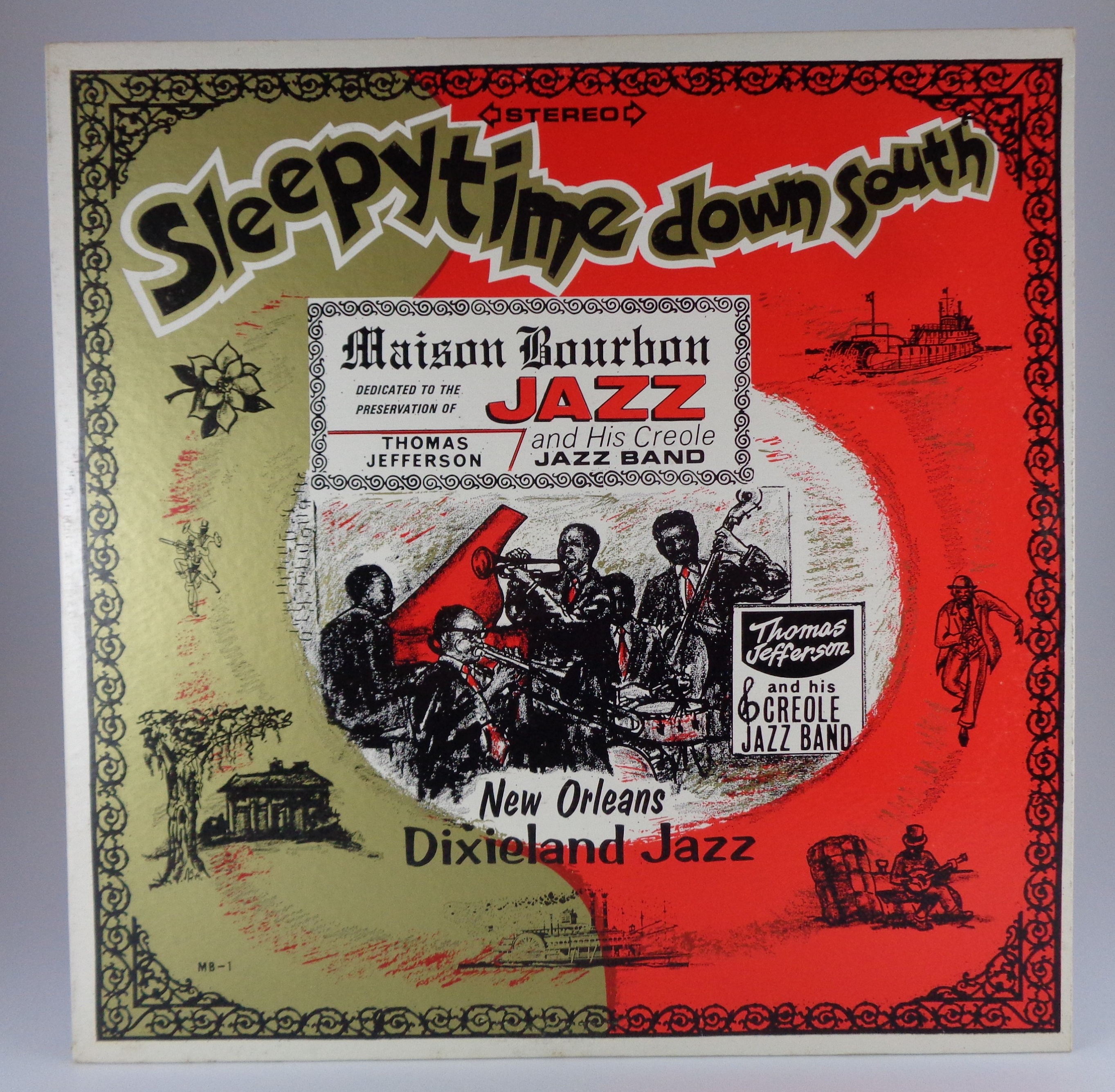 This jacket art may look a bit busy, but it attracted my attention nevertheless. For some reason, it brings to mind Mark Twain’s Huckleberry Finn or Tom Sawyer, or perhaps Joel Chandler Harris’ Uncle Remus, due to the writing font and various scenes depicted. My copy is even autographed by Thomas Jefferson, an American Dixieland jazz trumpeter who was strongly influenced by Louis Armstrong. And I have to admit, when I listened to this record I thought I was listening to Armstrong singing. Jefferson died in New Orleans in 1986. Once in a long while I buy a thrift store album for its artwork, only to find the music itself is great, and this was one of those times. The album was released by Maison Bourbon Records (I think their first record), year unknown, and the jacket art was by Art Milbon. 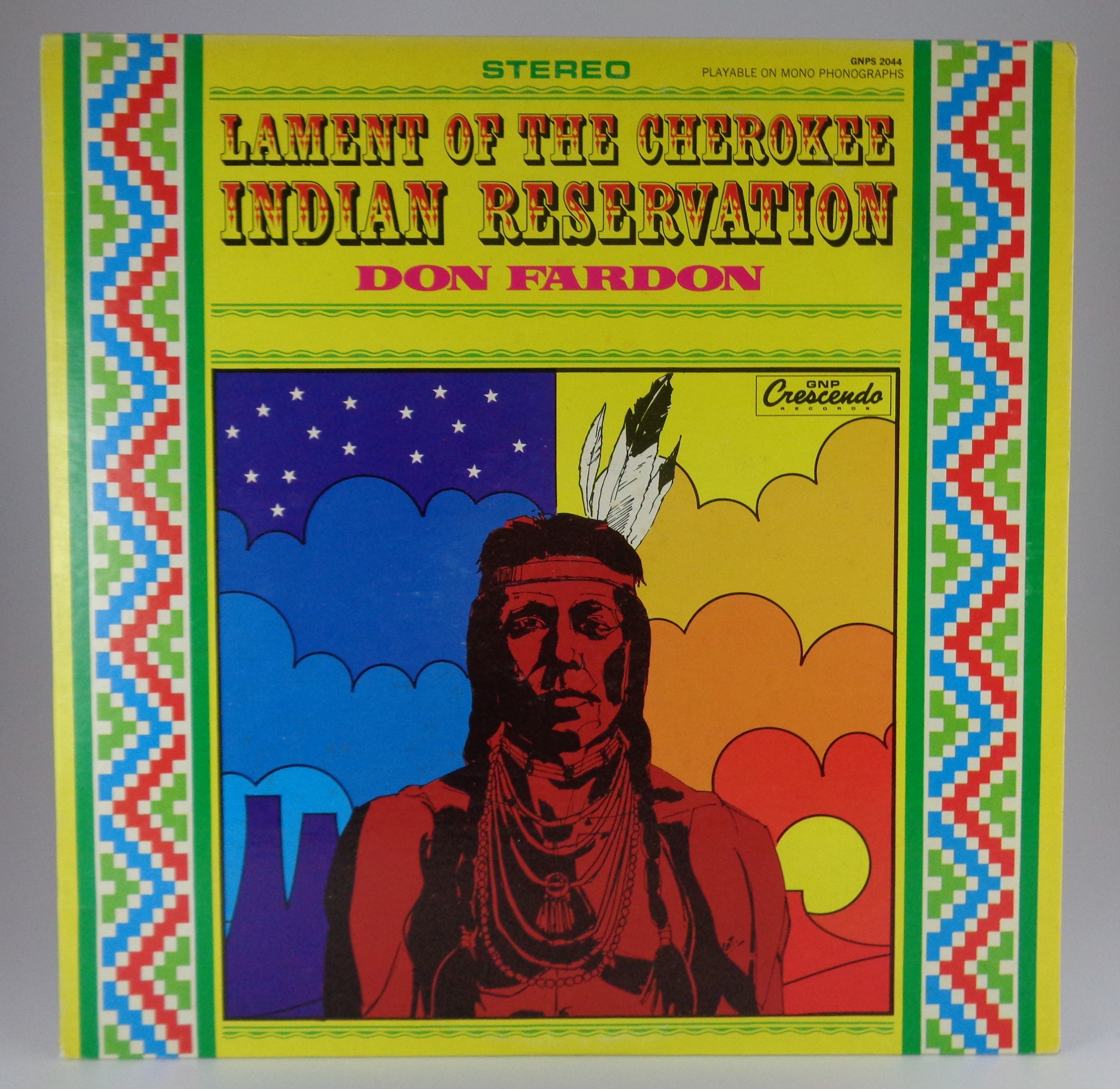 Most of you probably remember Paul Revere and the Raiders’ 1971 hit version of the title song, Indian Reservation (Lament of the Cherokee Nation), which went to #1 on Billboard’s Hot 100, but few remember Fardon’s earlier version which went to #20 on the Hot 100 in 1970. And probably with good reason. The Raiders’ version is powerful, with strong lyrics, while Fardon’s version, oddly, has loud and strong instrumentation while Fardon sings almost timidly in the background.

But this jacket artwork really grabbed me enough to fork out $3 at a flea market for an album I knew I wouldn’t listen to much, if any. I did look at it, scoff at the price, leave the vendor, and then return to buy it. It was released by GNP Crescendo Records. The artwork appears to be a direct rip-off of John Van Hamersveld’s famous “Indian” poster images of the late ’60s, but what the heck! It still looks great. Not surprisingly, there is no credit given in the liner notes for the artist. 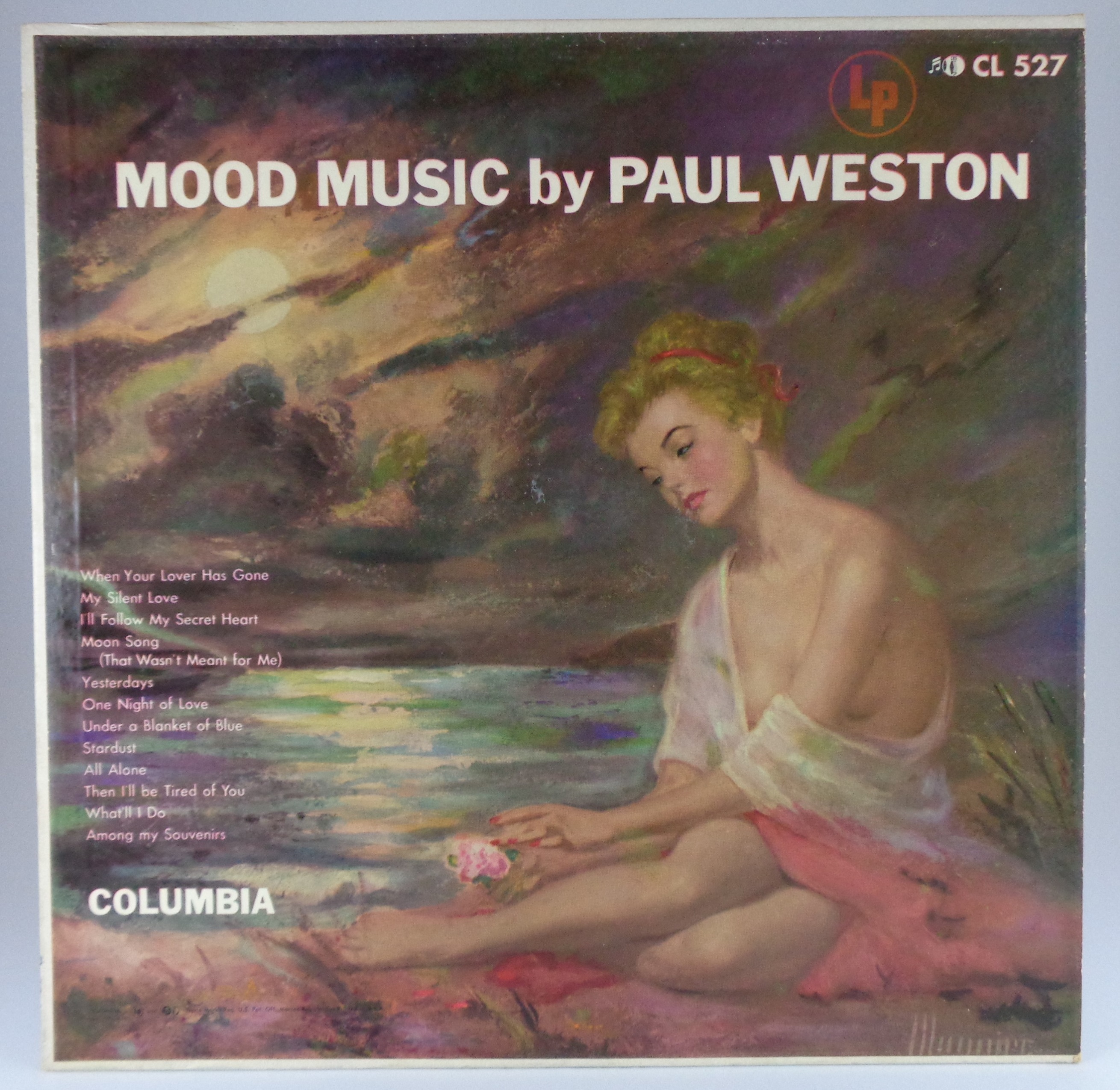 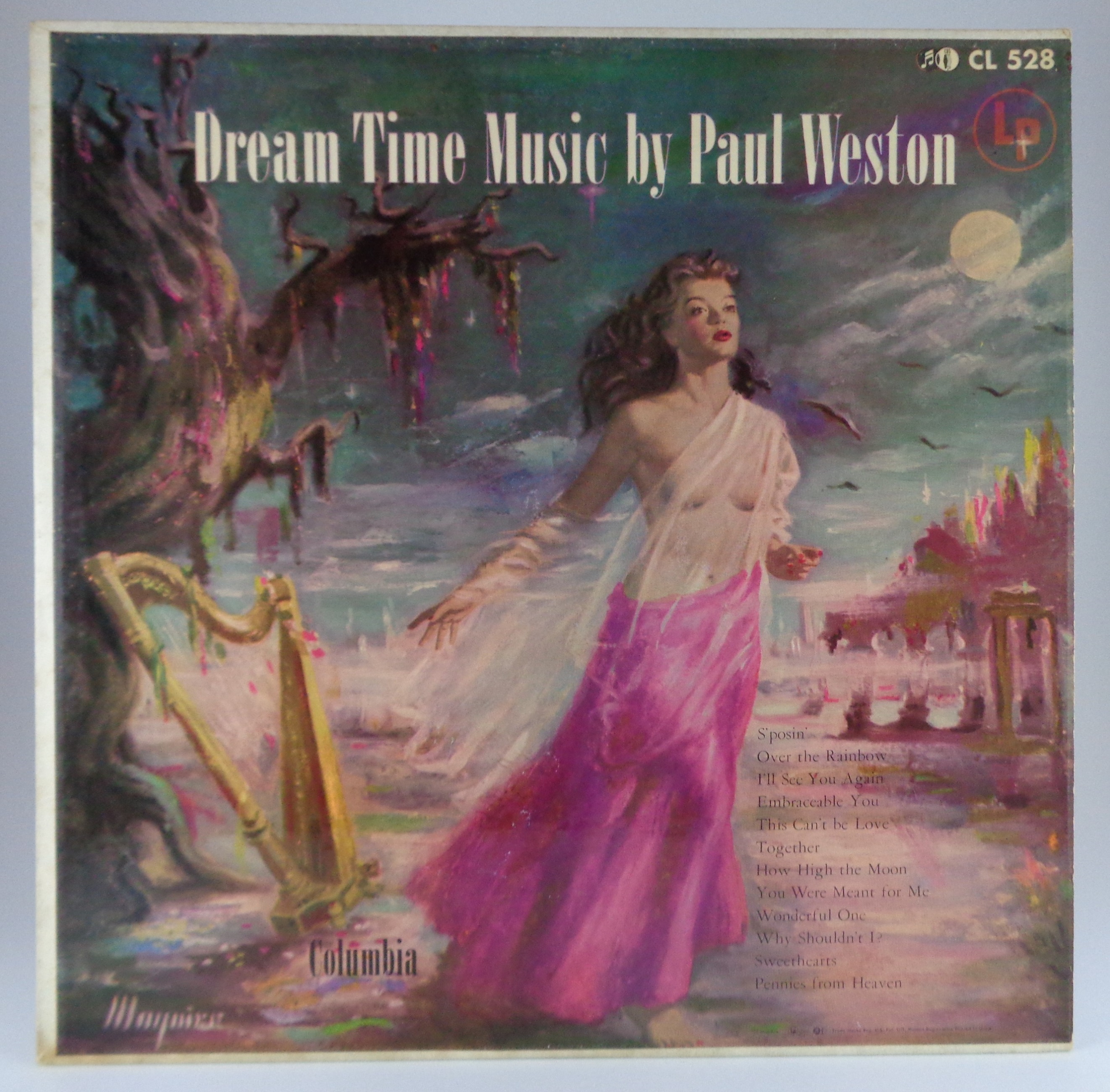 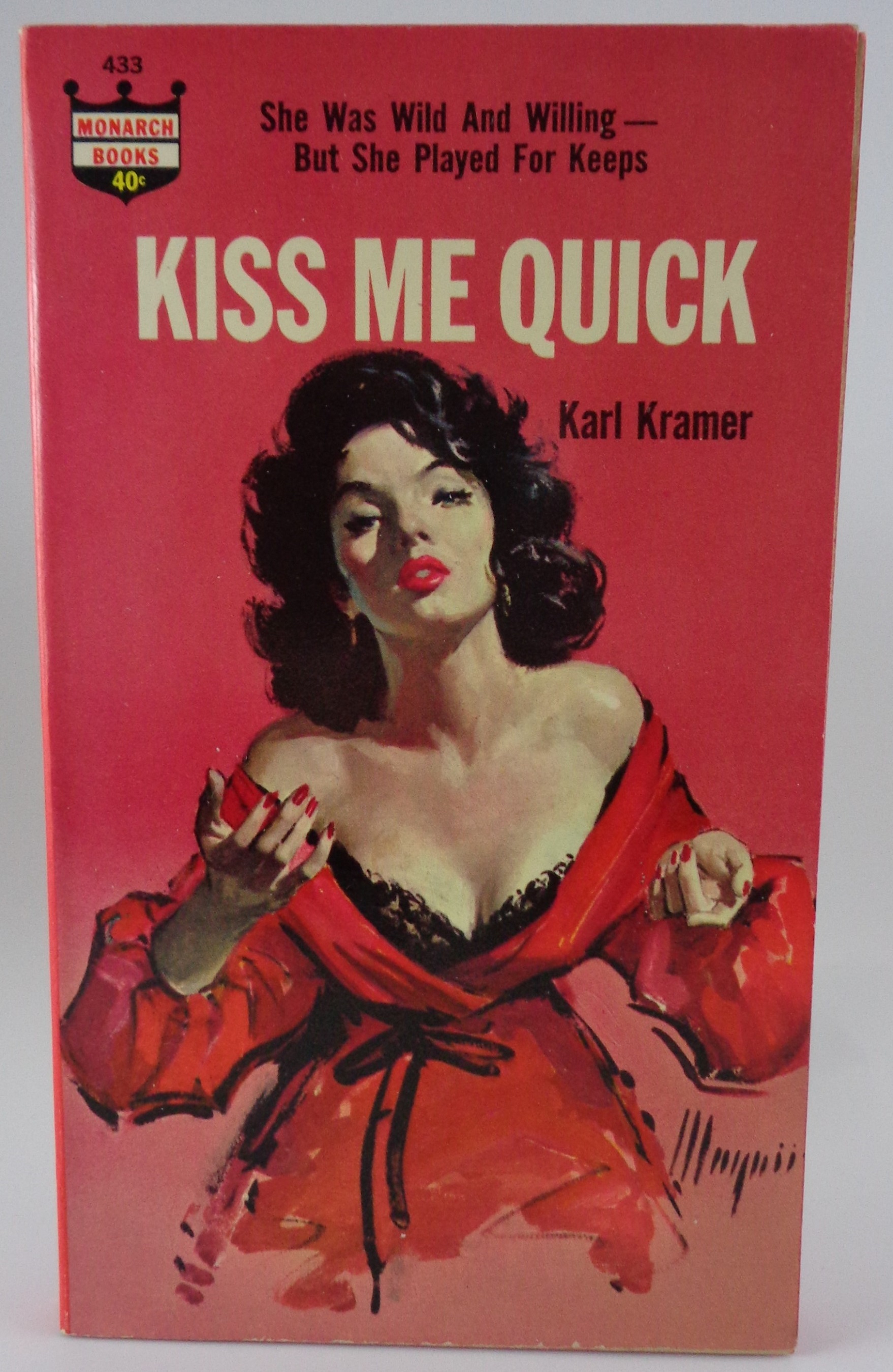 These two covers I throw in to show you that you never know what you are going to run across in your thrift store searching. Both jackets have artwork by Robert A. Maguire, an artist better known for his seedy (pulp) novel artwork from the 50's and 60’s to his romance novel covers of the 80’s. He did the artwork for a number of the Carter Brown detective series, but unfortunately, the publisher didn’t see the need in crediting the artist. I have shown his great artwork used for Karl Kramer’s Kiss Me Quick, published by Monarch Books. I was unaware that Maguire even did any album jacket artwork, but I ran across these during separate thrift store visits. His art was used for two Paul Weston back-to-back albums, CL 527 and CL 528, but I have been unable to find any other album jacket artwork by Maguire. I’m not saying there’s not more out there; just that I haven’t found it yet.

I have to admit that I find his sexy pulp novel artwork much more appealing, but these two have grown on me in a spooky, surrealistic way……….. 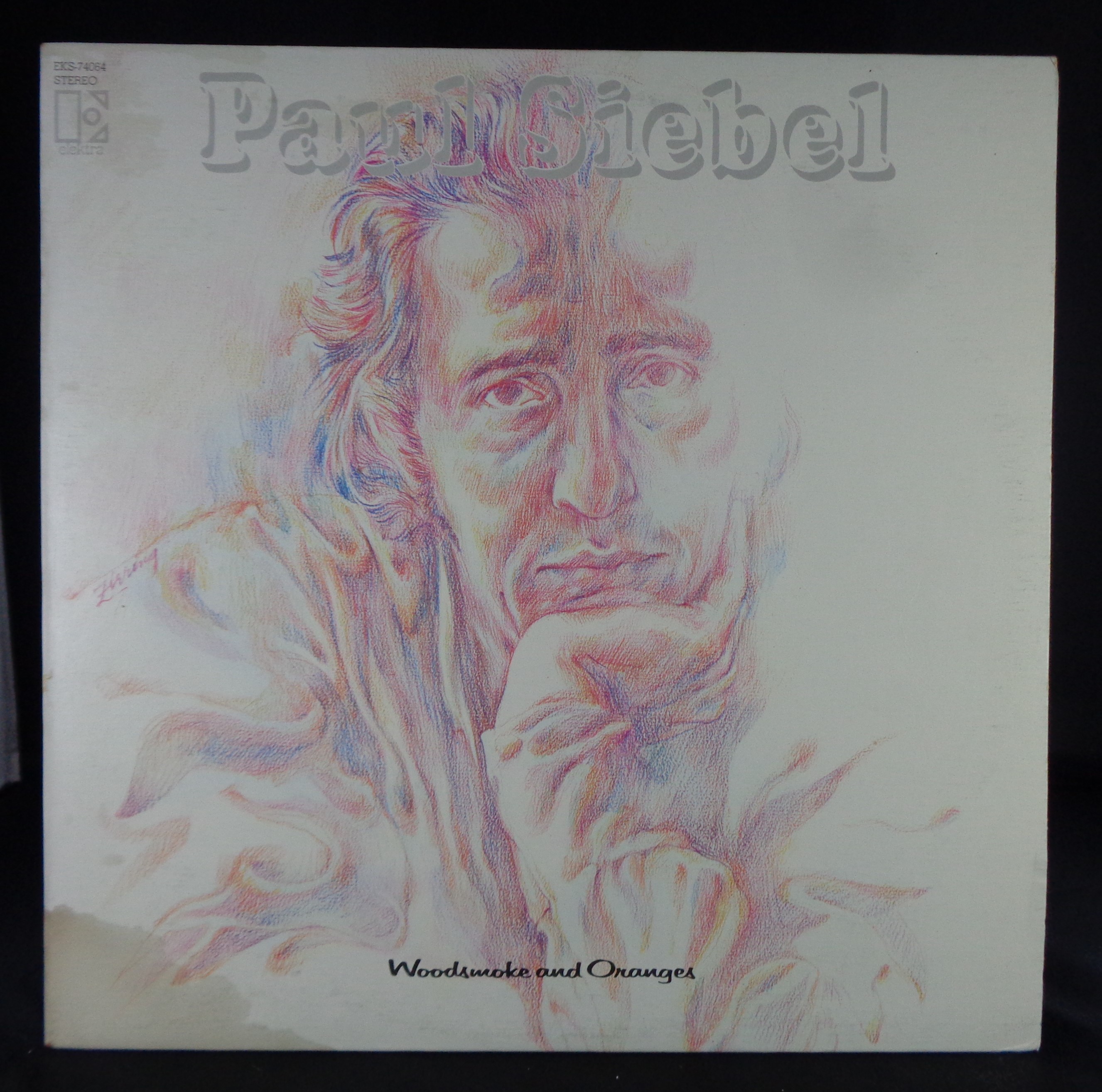 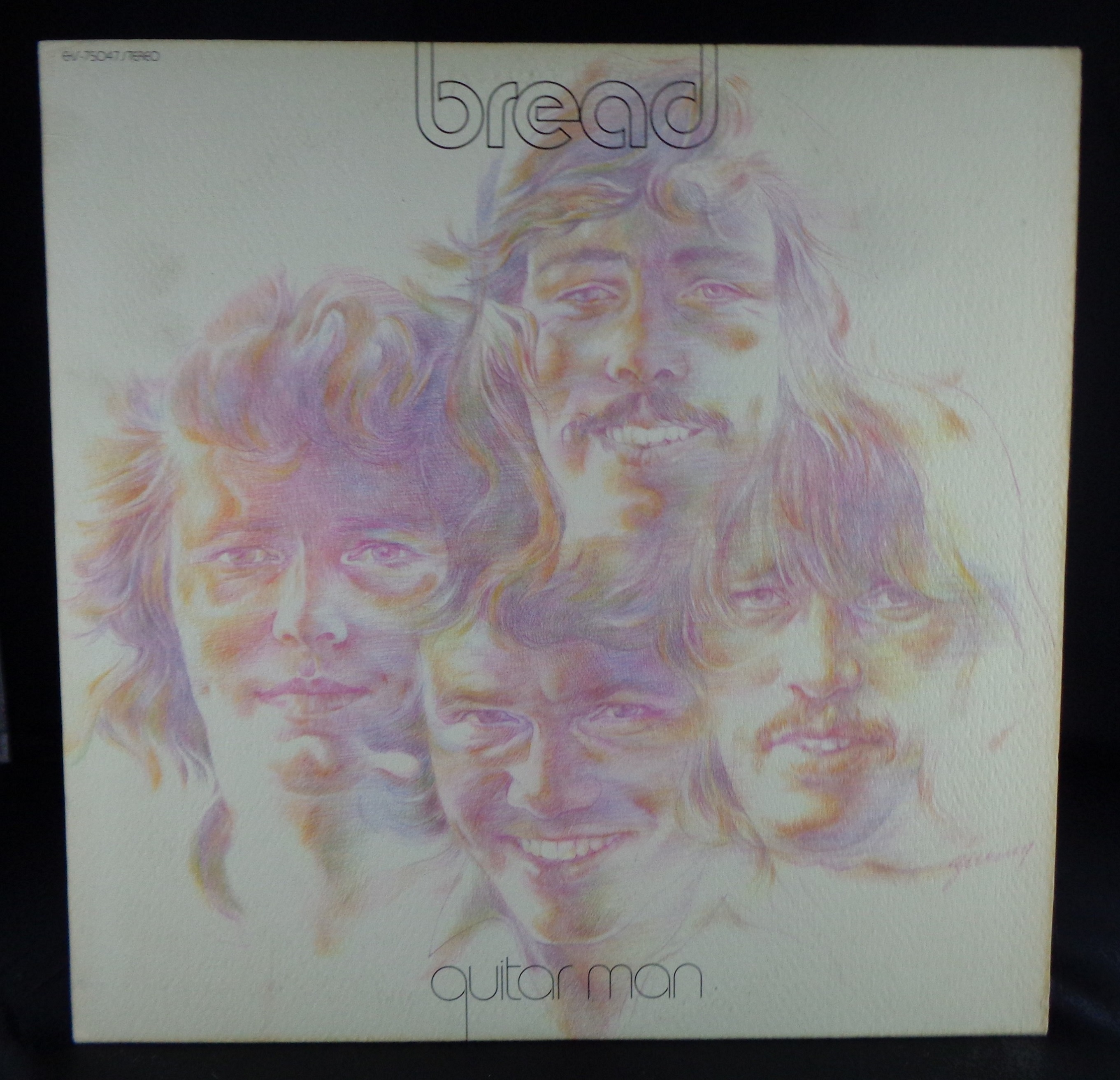 When I ran across this album (excuse the bottom left staining) I thought, “Why does this art look so familiar? It didn’t take long to make the connection to Bread’s Guitar Man album jacket art. Both illustrations were done by Bob Ziering, with Siebel’s debut album released in 1970, and Bread’s in 1972, both by Elektra Records. It’s useless jacket art trivia like this that keeps the hunt exciting. I can’t say I was fond of Siebel’s music on first listen, which to me sounded like Bob Dylan meets Country. But a subsequent listening, after reading a good online review, made me appreciate it more on second listen. Fact is, I think I had Bread on my mind when I first listened to Siebel’s record, so of course, I wasn’t listening in the right frame of mind. The online review noted that one song on this album, Louise, was later covered by Linda Ronstadt, Ian Matthews, Bonnie Raitt, Jerry Jeff Walker, Leo Kottke, and others. Far be it from me to criticize this fine record, then.

Which brings me to one of my unwritten rules – Never judge an album after only one listen. Typically, I may find a few songs on a new-to-me album that I like on first listen, but often find more I like on subsequent listens. But I will sometimes find an album that I hate on first listen, liking it even less on the second and final listen. No, I don’t force myself to sit through those a third time, hoping to be brainwashed into liking it. 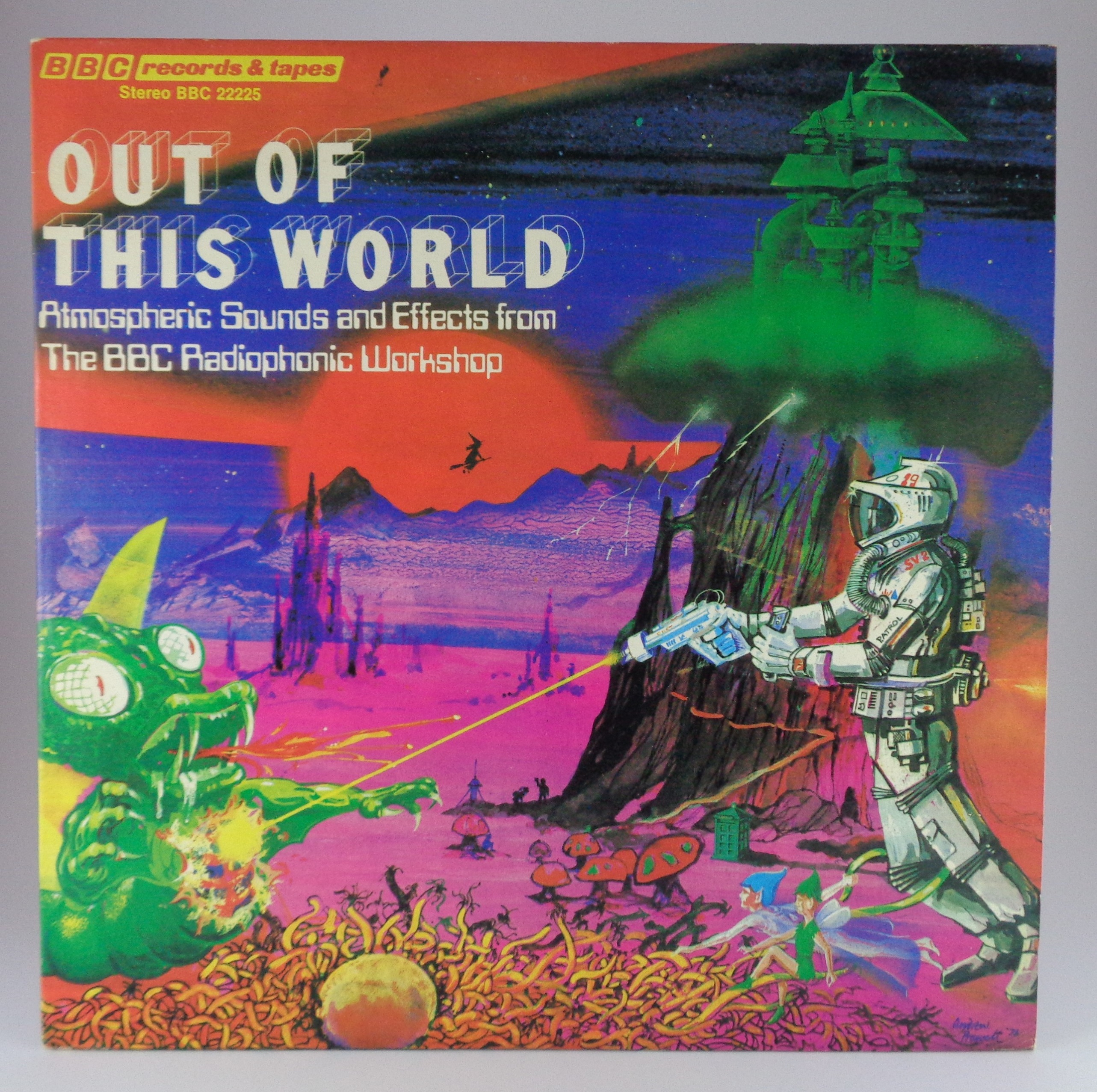 This is a recent estate sale find – a sound effects record put out by BBC Records and Tapes in 1976. The jacket art is by Andrew Prewett. This is one of those jackets you could waste a Saturday afternoon pondering. This one has it all – a spaceman zapping a bug-eyed green monster, mushrooms, elves or fairies, a witch flying on a broom, a futuristic city in the clouds, and a kitchen sink. Just kidding about the kitchen sink. I haven’t listened to this record, but it might be interesting to find out what sounds “fairy appears”, “fairy disappears”, “threatening shadow”, and “fire-spitting monster” make, just so I know if I’m ever around them. 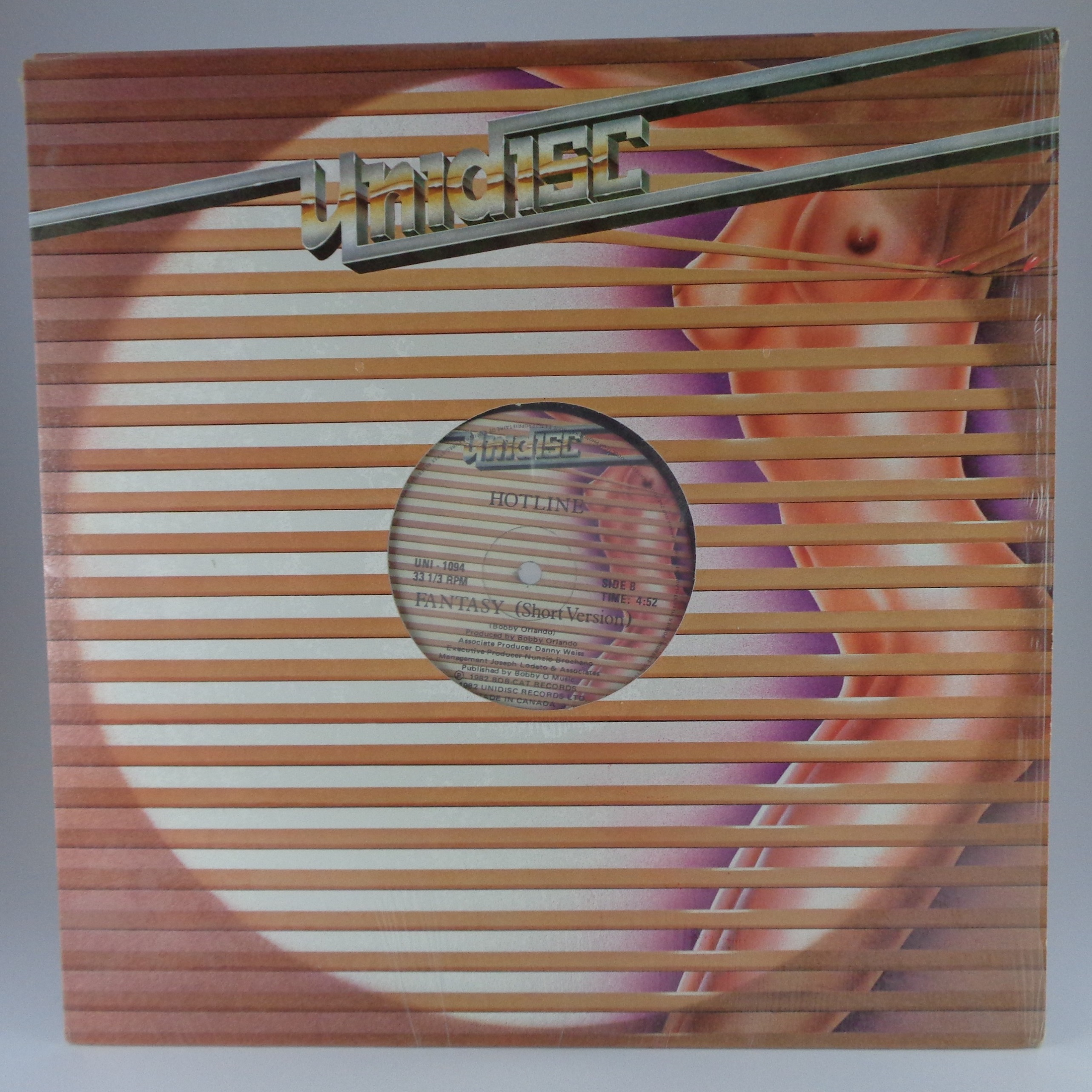 I was very pleased to run across this 12 inch single, still in shrinkwrap, although I had never heard this disco song from 1982 released by Unidisc Records out of Canada. I have to say this is another one that I like the music as well as the jacket art. Anyone familiar with 12” single jackets can tell you that many such jackets are far from boring, this one included. I like naked just as much as the next guy, and this airbrushed nude through the blinds is downright cool. Adding to the beauty is the fact that the record label itself duplicates the image. How cool is that?

This brings me to one of my beliefs that flies in the face of traditional record collecting “knowledge”. Most collectors seem to place a premium on keeping original shrink wrap on their albums, believing such oftentimes torn, wrinkled plastic adds some additional value to the record. As someone who collects for jacket art, and not resale value, I do not share that belief. To me, shrink wrap often takes away from the aesthetic values of the record jacket art. If exposed to heat, the shrink wrap can contract, causing the record to warp over time. Moisture trapped beneath shrink wrap can cause mildew and eventual album damage. So I’m not a big proponent of keeping shrink wrap on my albums, especially if the album is not still sealed entirely. I figure the new mylar sleeve I place it in after a good cleaning will protect it best. I’ve bought many an album in shrink wrap, only to find blemishes on the jacket after the shrink wrap removal. That said, you see I haven’t yet removed the shrink wrap from this 12” single. Sometimes I have to work up the courage to do so, but once I do I’m usually happy that I did.

Music from “Battlestar Galactica” and Other Original Compositions From Giorgio Moroder 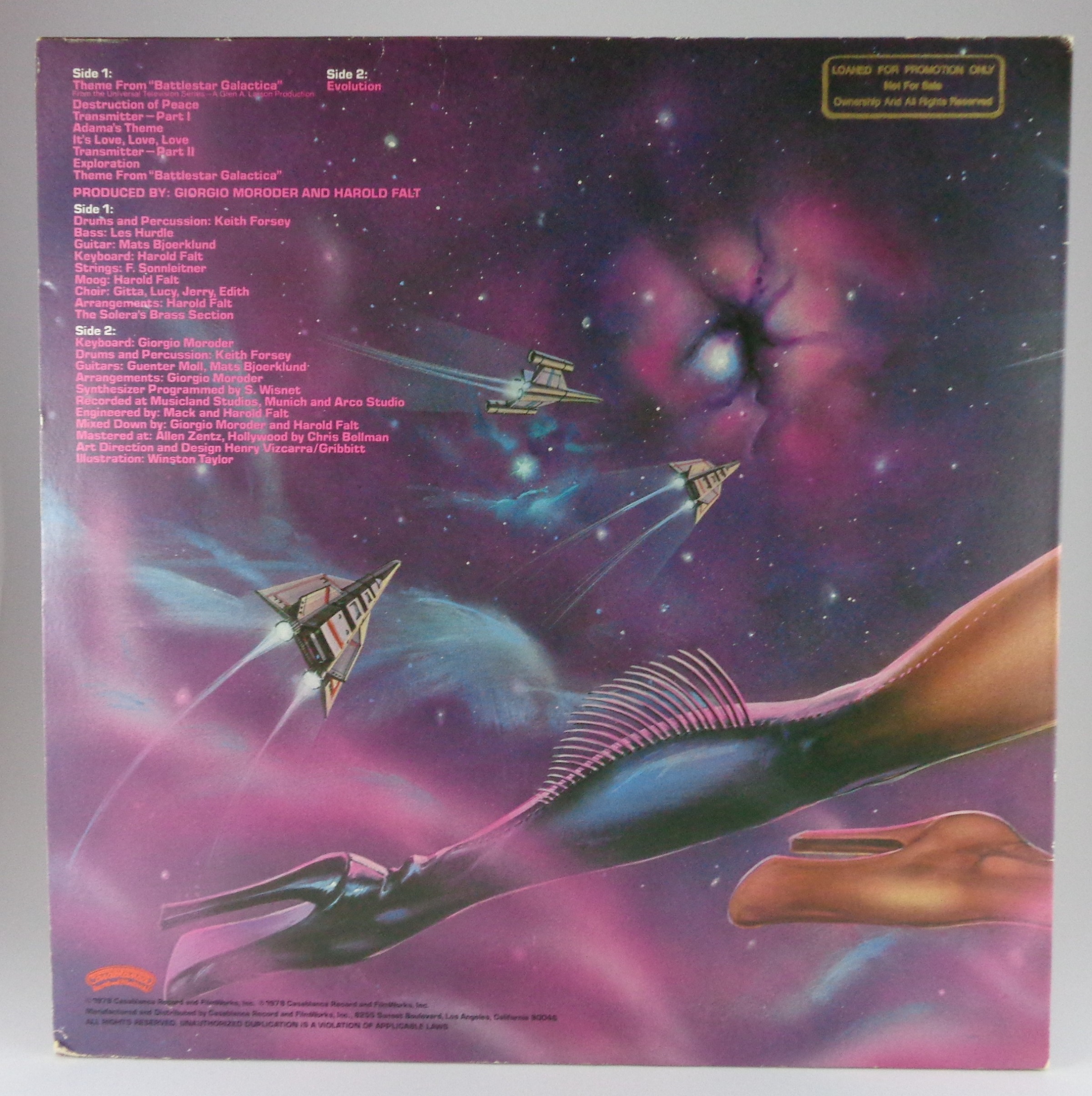 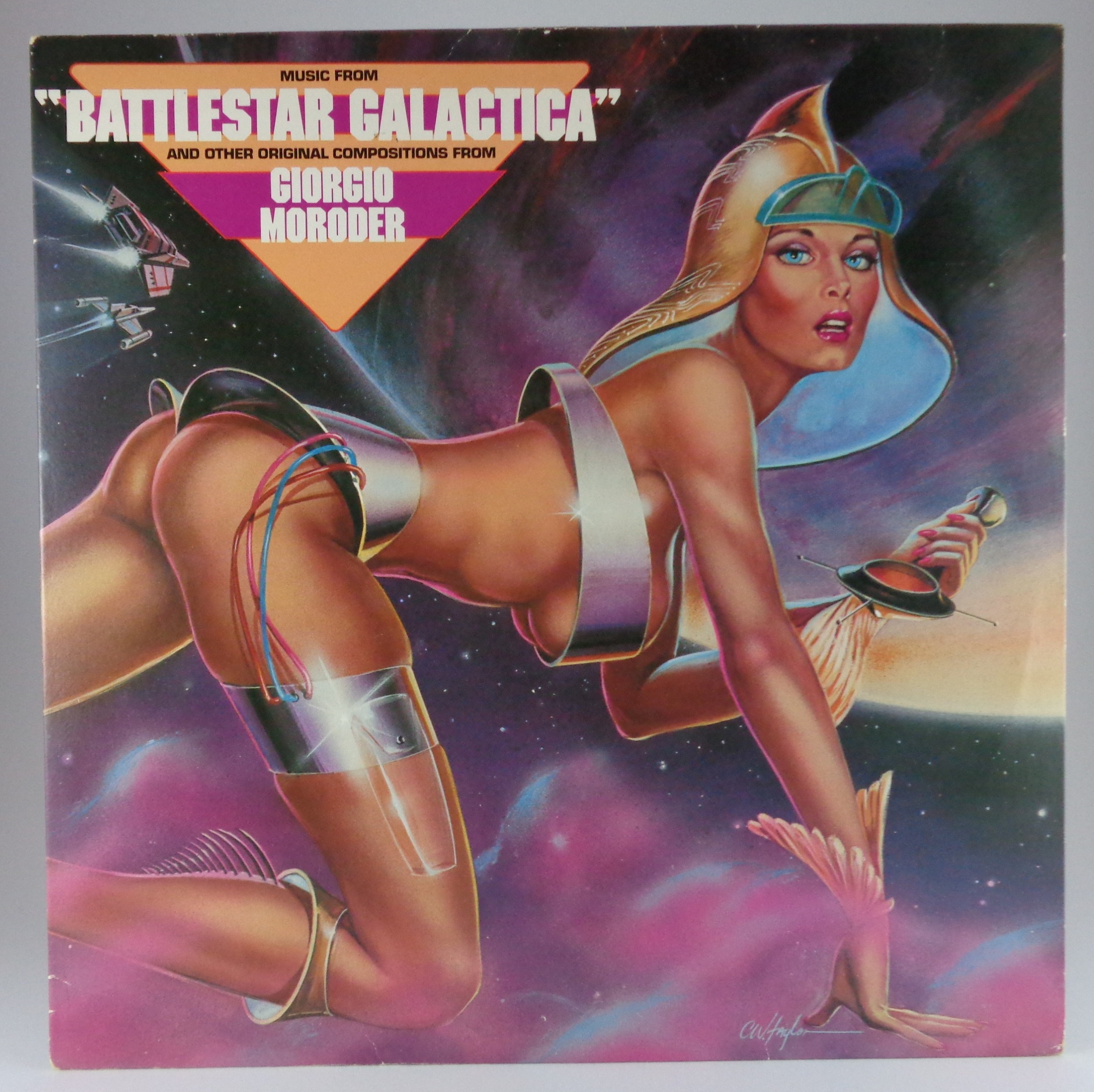 I had seen this album in the past, finally breaking down and buying a decently priced copy off eBay a few months ago, figuring I would likely never run across a copy in my thrift store and estate sale quest. Oddly, a few weeks later I ran across a cheaper, but cutout, copy at a local estate sale.

This album, with its wrap-around artwork by Winston Taylor, screams GATEFOLD!, but alas, was not produced as such. The album was released in 1978 by Casablanca Records and Filmworks, Inc. The music on this album is quite good. If we are ever conquered by space aliens, I hope they look like this one. 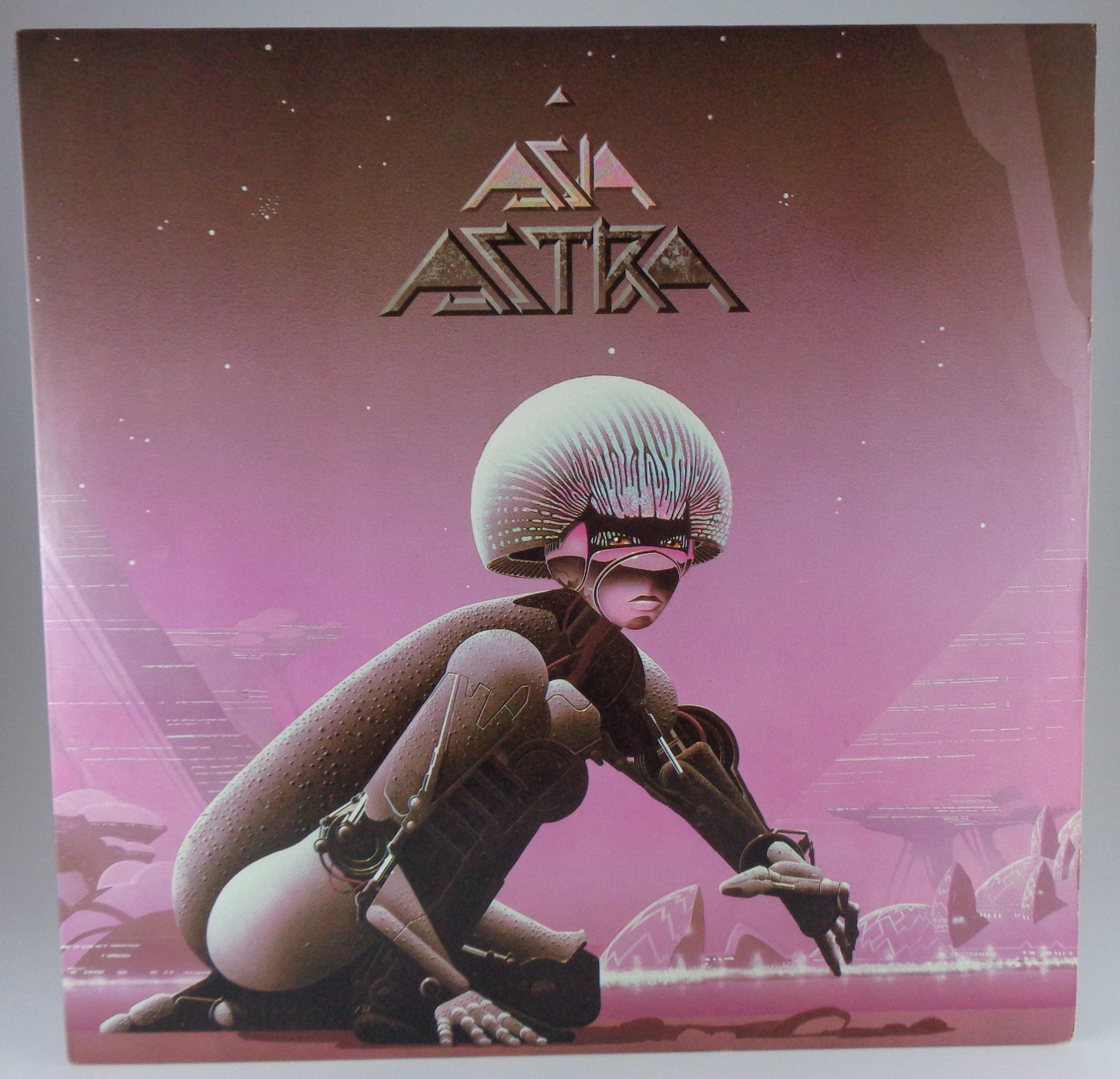 A different take on the space alien mentioned above, this 1985 release by Geffen Records features artwork by artist Roger Dean, best known for his work on posters and album covers which he began painting in the 1960s. You may be more familiar with his artwork for some albums done for the group Yes. His artwork was featured on many album covers for both Yes and Asia. Both groups featured guitarist Steve Howe and keyboard player Geoff Downes.

Here's another quote for you, this one from Thomas Hardy: "Everybody is so talented nowadays that the only people I care to honor as deserving real distinction are those who remain in obscurity."  So perhaps that is my goal - to bring some of the lesser known artists, or more specifically, their graphic designers, out of obscurity.

If you have any thoughts you would like to convey to me, good or bad, about this article or any of the others I have written, please email me at This email address is being protected from spambots. You need JavaScript enabled to view it..  It would be nice to know there are readers out there who enjoy or despise my articles.  Well, I could go on and on, but this is hopefully enough to get you back out to thrift stores and estate sales to find your own treasures (at least once the COVID-19 lockdowns are lifted.) That is my ultimate goal. Happy hunting!