“Imitation is the sincerest form of flattery.” This quote is attributed to Charles Caleb Colton, an English cleric, writer, and collector who lived from 1780-1832. Colton collected rare paintings, but had he been born a couple centuries later, I am confident that he would have collected record albums, with a minor specialty in spoof album jackets. Seriously . . .

Over years of collecting, I’ve run across album jackets that either pay homage to, or satirize (parody), well-known album covers. And once you know they are out there, as a collector, you seek them out; relentlessly, forgoing family functions, missing important anniversaries, eventually finding a note on the kitchen counter saying your spouse has left, and “please don’t try to find me”. Just kidding, but if this is hitting a nerve, stop reading this and go hug your spouse. Now that you have provided the necessary reassurance to your spouse, back to the article….

There are websites that pay tribute to spoof albums, but the problem I have with some of those websites are:

• Some sites don’t indicate whether the spoof cover is one that was used by a musical artist, or whether it was just created by a computer program and posted on the internet for amusement;
• Some sites show posters, advertisements, t-shirts, and even cookbook covers, showing spoof album covers. To me, if you write a cookbook, then spoof an old cookbook cover, not a record album jacket;
• Some show spoof covers that were only issued in CD format. Sacrilege! Any “record” collector knows that a CD doesn’t count as a spoof record album. If the format isn’t 12 ¼ inches by 12 ¼ inches, then it just doesn’t count.

Okay, the last two contain my opinions, but damn good ones, again in my humble opinion. And when you have strong opinions about your own opinions, you can bet they are based on sound, logical principles that are not subject to debate. But I have spent countless hours, or perhaps just brief internet searches, seeking spoof albums that don’t exist, thanks to those websites. I’m not trying to bash the websites, as I know their owners obviously appreciate a good spoof, regardless of whether a physical album with a corresponding jacket was ever created.

That is where I differ. To me, the real tribute comes from issuing a real record album (lp), with that spoof cover. I’m going to share some of my favorite “real” spoof albums. If you go looking to buy any of these on the internet, you should find them; they do all exist in the real world. You’re welcome. I may even mention a few that are only available in (gasp, followed by heavy sigh) CD format. I will share ones in my collection, although there are many more out there that I may mention but not illustrate. But again, you can see what they look like by a quick internet search.

I’m not going to discuss the musical merits of these albums, at least not based on any actual knowledge I may have of the album. The good thing about collecting albums for art is that you don’t need to own a turntable. But yes, I do have a turntable, and do listen to record albums as much as possible (right now, in fact), with the understanding that being a good husband requires that at least ten percent of my waking time should be spent listening to my wife, rather than my music. She’s yelling something from upstairs now, but I can’t hear her over the music.

Now that the dishwasher is emptied, back to the spoof jacket art: 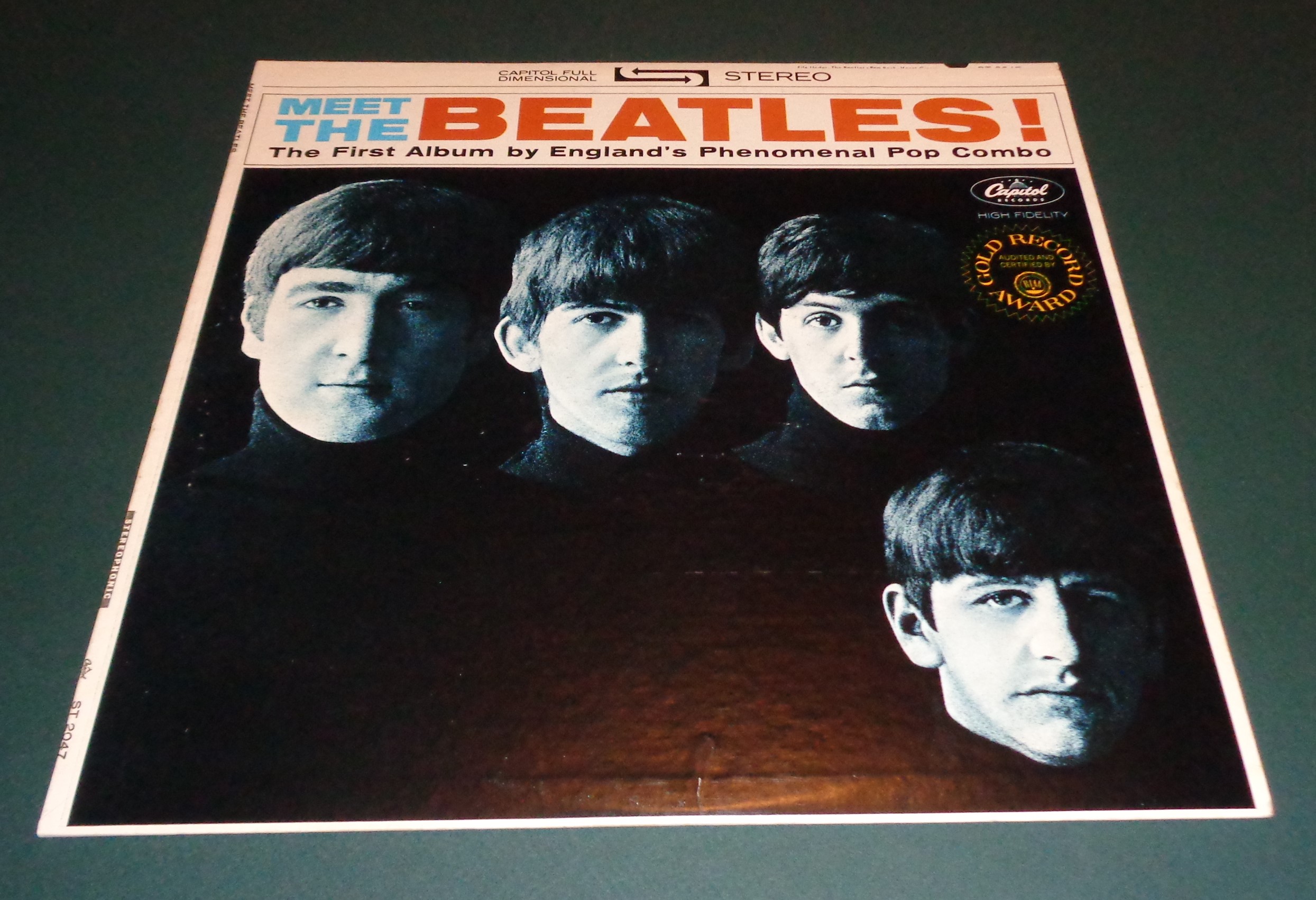 There’s little dispute that this album has earned its place in music history. And no doubt that the jacket art resonates with most folks over the age of 50, if not with younger folks as well. Most collectors even remember where they were when they bought, or listened to, their first Beatles album. Sorry about using a later printing of the record, which contains the Gold Record Award emblem, which to me detracts from the jacket art. Enough mushy reminiscing……back to the spoofs.

I have three noteworthy spoofs of Meet the Beatles! The first is Meet the Stone City Band!, which was issued in 1983 by Gordy Records. The band had previously backed Rick James, The Temptations, and Teena Marie. The album jacket perfectly spoofed Meet the Beatles!, both on the front and back covers. It is so spot on, it falls into my very broad “favorites” category. 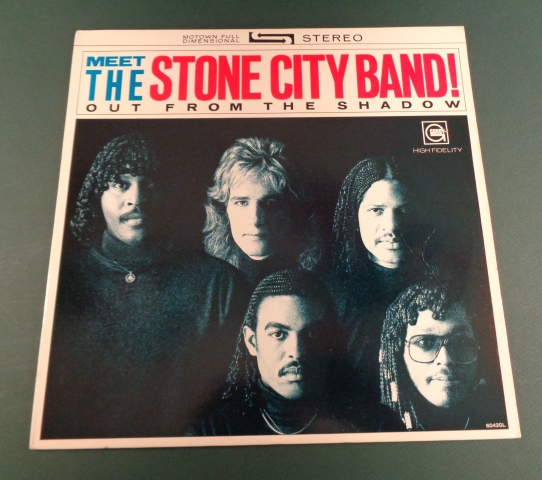 The other spoof, while not perfect in every way, is Meet the Raisins!, issued in 1988 by the Atlantic 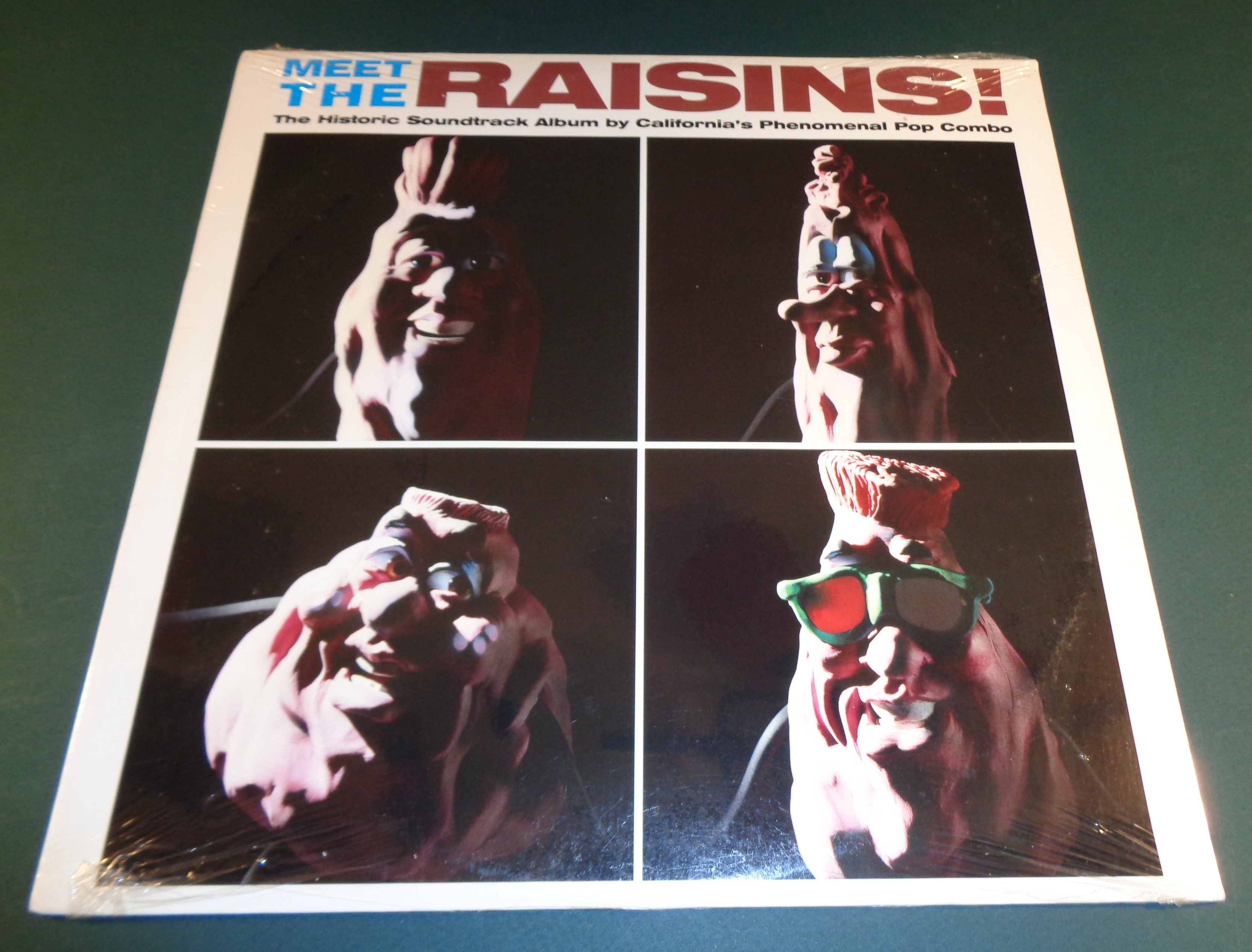 Recording Corporation. I like the shadowing on the Raisins’ faces, but I would have preferred that the photos not be dissected into four photos. Did the record company have a problem getting all four Raisins together for a group photo? Does this hint that, like the Beatles, the Raisins were already having creative differences, thus leading to their ultimate break-up? Sadly, you never hear about any subsequent successful Raisin solo albums, so I guess the spoof album jacket is the last similarity to the Beatles. 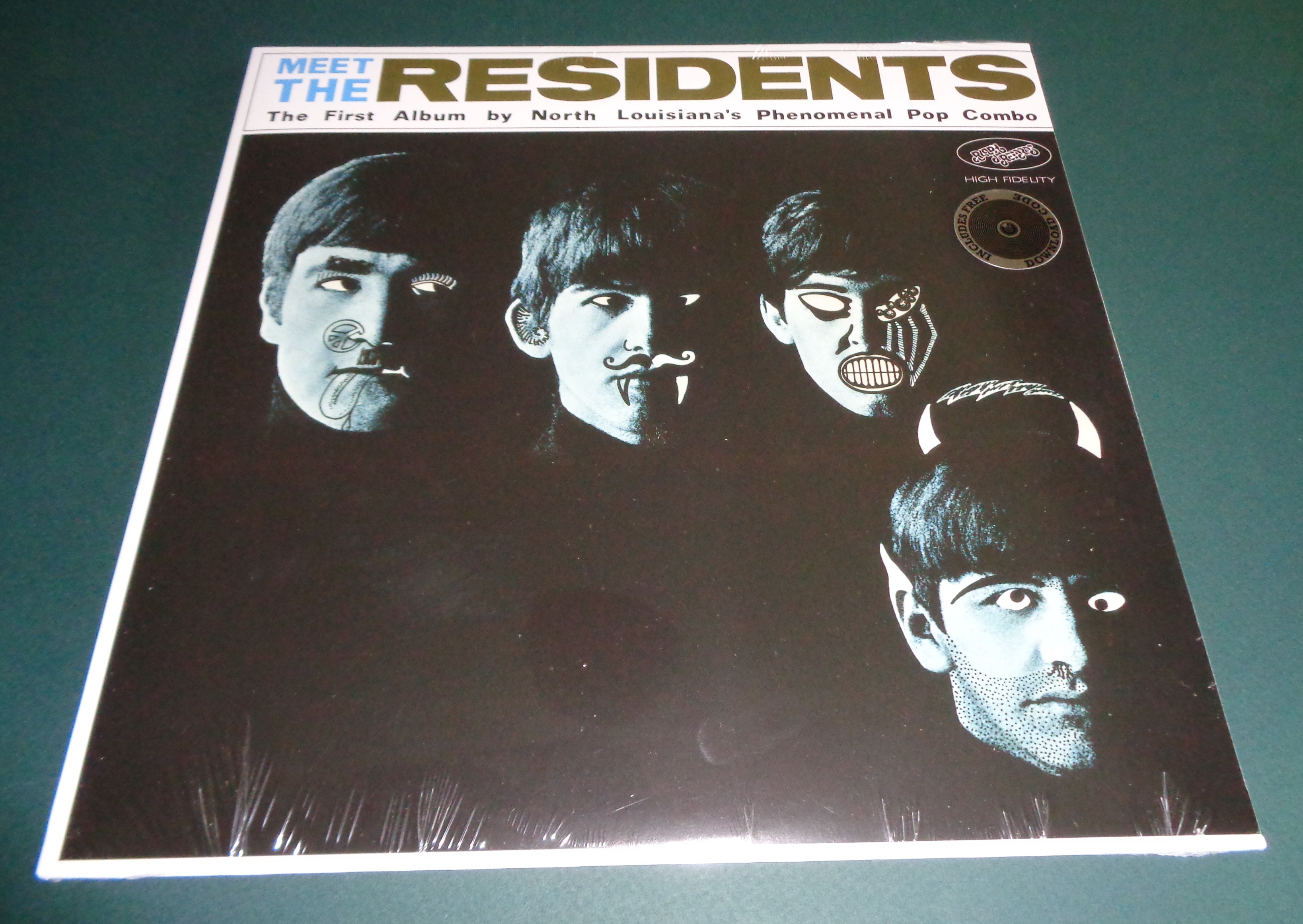 Perhaps the most well-known Meet the Beatles! album spoof is the Meet the Residents! album released in 1974 by Ralph Records. I never liked their defacing of the Meet the Beatles! album, with the front jacket appearing more like school kids’ mindless scribbling to deface their latest Monkees’ or Partridge Family album. I hate running across needlessly defaced albums, and you see plenty of them in thrift stores. Personally, I never had the need to scratch out Davy’s eyes or write “Mickey loves Jim” on any of my Monkees’ albums. So why would I like the Residents’ jacket art? But just for your satisfaction, I bought a reissued vinyl

copy off the internet so I could show it here and still be true to my statement that any albums pictured are from my personal collection. 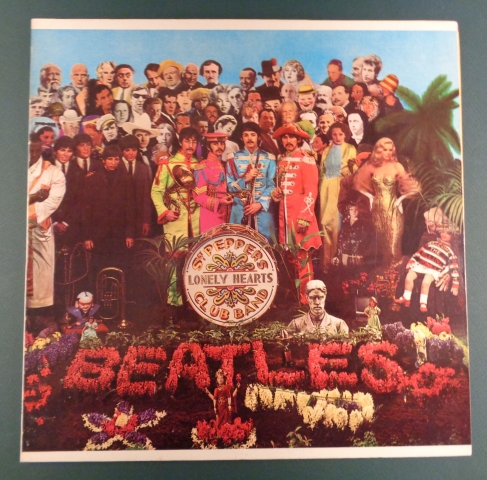 I know, you are wondering why anyone would bother to spoof the album jackets of a relatively obscure band that only recorded together for about seven years? You can probably remember the last time you pored over the Sgt. Pepper’s album, trying to see how many famous folks you could identify on the jacket, the soft sound in the background of your spouse asking other family members if they knew where you were. 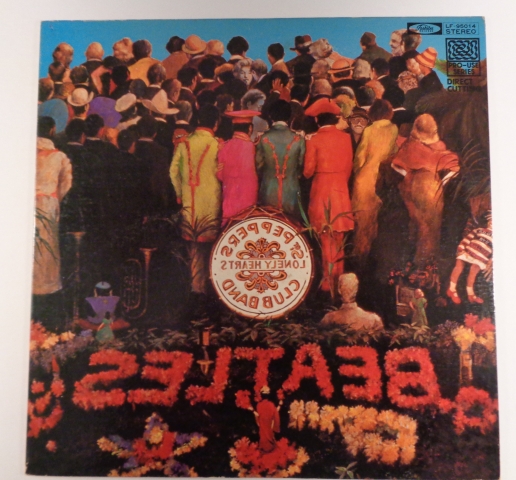 from the original jacket art turned around, showing their backs. I find the album art extremely creative, especially because if you were to actually stand behind the group shown on the real Sgt. Pepper’s album, you would only see the backs of the folks standing toward the back, and would not see the flowers, words, or other items to the front of the Sgt. Peppers’ al 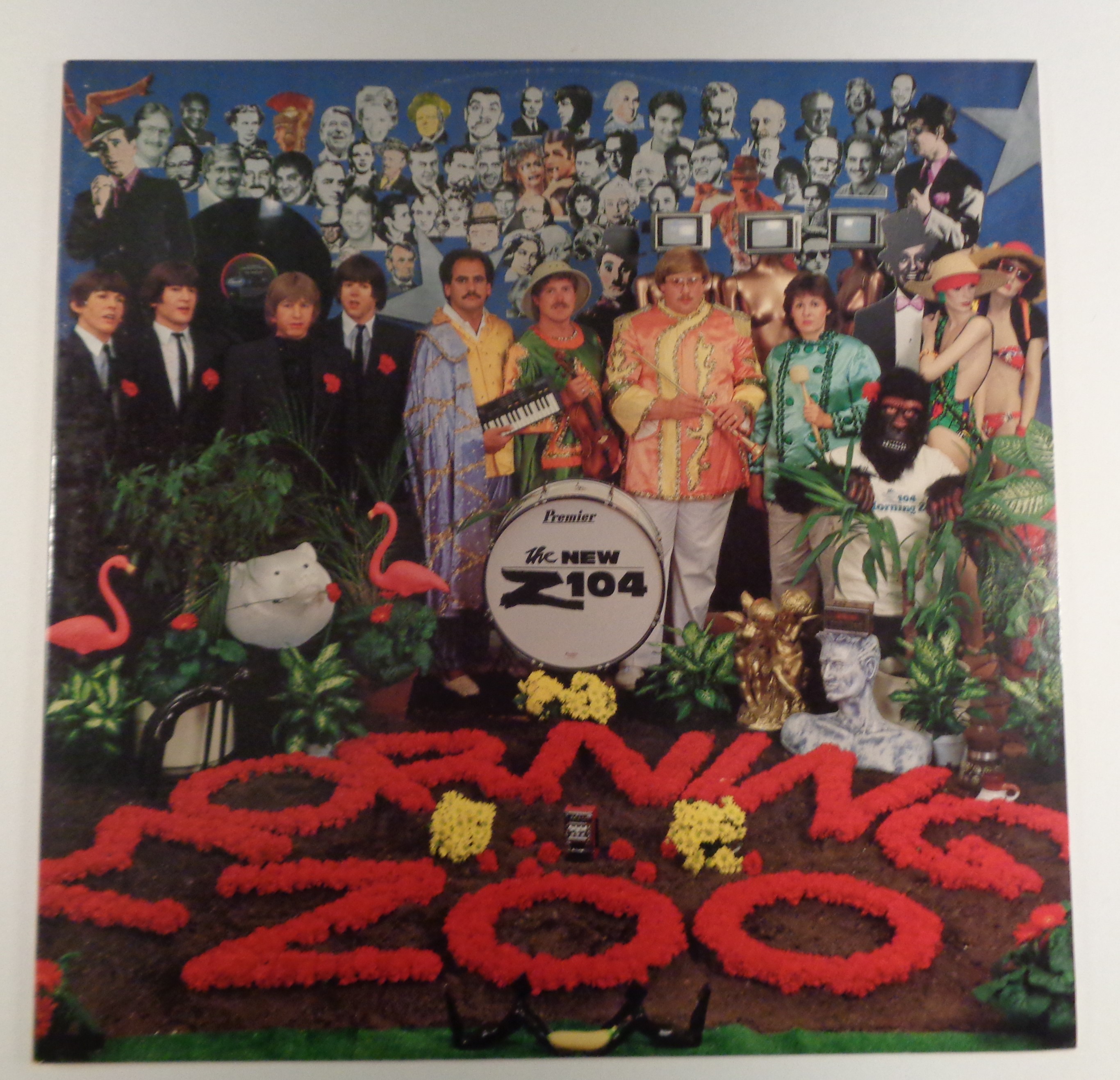 My second spoof cover was found while digging through a thrift store record bin. It is a radio station release entitled The New Z104 Morning Zoo. The date of release is unknown, with no indication on the record or jacket. The record contains some of the morning deejays’ humorous banter, and no, I’ve never bothered to listen to it. But this find illustrates why I like searching thrift stores for cheap albums- you never know what you might run across that is worthless to everyone but you. I shouldn’t make fun of the record, as the back jacket narrative notes that it was produced to raise money for a local charity in Virginia Beach where the station is located. Sadly, the buck I spent at the thrift store did nothing to help them. 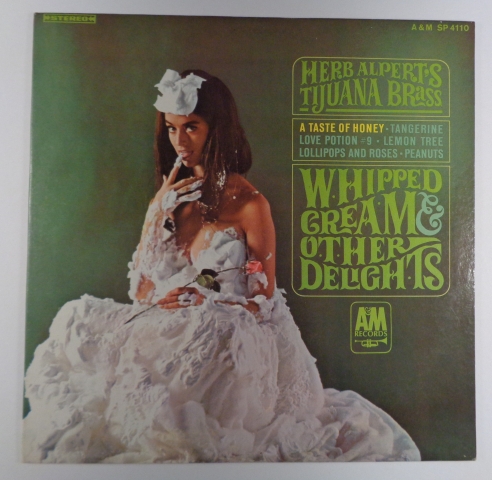 Perhaps the most widely parodied album in history, the original jacket art likely contributed to many a young man’s fantasies about the many uses of Cool Whip. The album was released by A&M Records in 1965. Many articles have been written about the cover model, Dolores Erickson, who reportedly was three months pregnant when the jacket photo was taken. She is 82 as of this writing. She will live forever through the jacket art.

Below are the jacket art parody albums I have for this record. I think one website lists over 200 parodies for the album, but again, many, if not most listed, are not in record album form, so don’t waste your time looking for them. The following are in record lp format, so let the search begin……

Spaghetti Sauce & Other Delights – Pat Cooper, issued by United Artists Records in 1966. This was 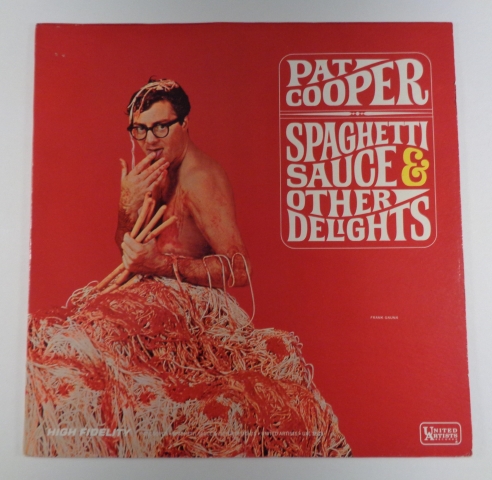 the first spoof of this album I ran across. Pat Cooper, now 89, had a number of creative covers for his comedy albums, collectible on the cheap if you start collecting such jacket art. Sadly, while I own a few of his albums, I have never sat down and listened to any of his comedy records. I used 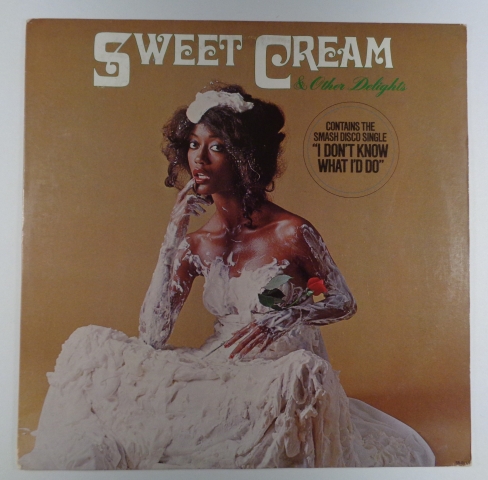 to buy a lot of comedy albums, “collecting” them, but after I listened to an old Morey Amsterdam (remember he played Buddy Sorrell on the Dick Van Dyke Show?) I stopped buying most comedy albums, because I realized that comedy actually has changed dramatically over the decades, from the slap-stick of the Amsterdam album to the crudity of much of today’s comedy.

Sweet Cream & Other Delights – Sweet Cream, issued by Shadybrook Records in 1978 is shown below. I think the cover would have been better had they not included the wording and circle regarding the “smash disco single” that is included on the album. But I was 21 when the album was issued, so the record company didn’t bother to call and ask me my thoughts on the jacket art format. 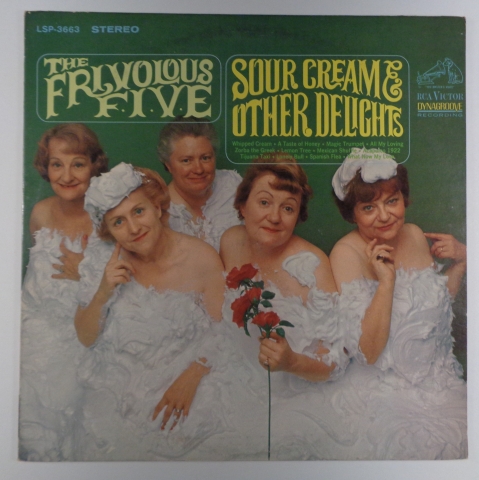 Sour Cream & Other Delights – The Frivolous Five, issued by RCA Victor in 1966 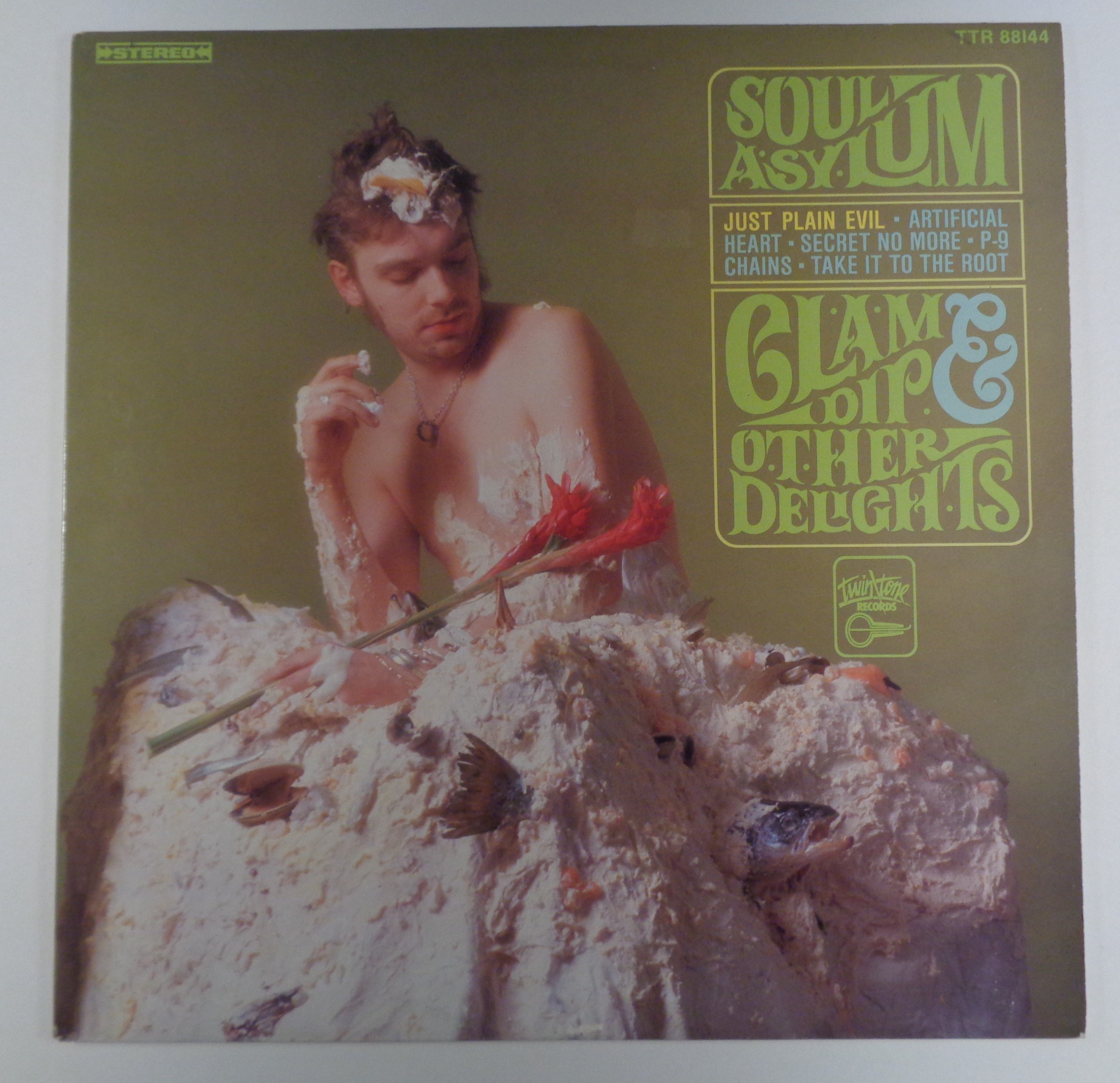 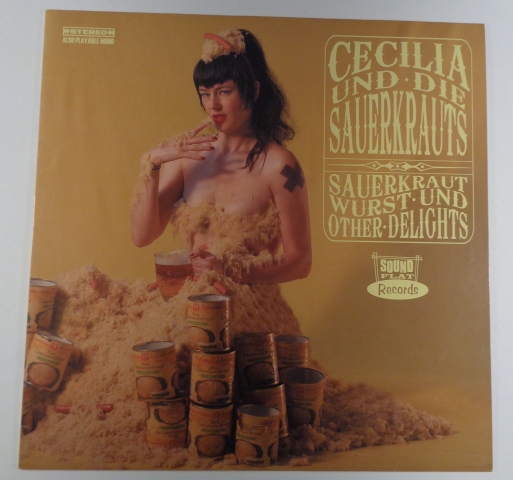 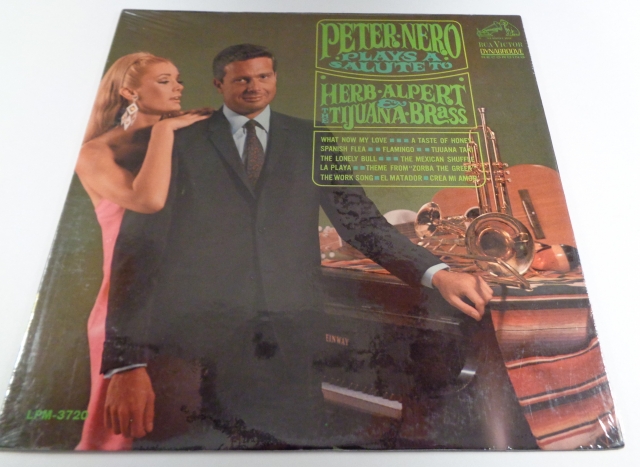 Salute to Herb Alpert & The Tijuana Brass, issued by RCA Victor in 1967. It pays homage both to Herb Alpert and the famous Whipped Cream jacket, most notably with the type font used. I hate to end with this, the most boring of the spoofs, in my opinion. So it’s last and least (Sorry, Mr. Nero):

I’m sure there are other record albums out there spoofing Whipped Cream & Other Delights. Hopefully I will run across more. I know there are quite a few others that are in CD format, but I don’t go out of my way to locate or buy them, as I prefer the larger record album format for “art”. Some of the CD spoofs you might want to check out online are:

Again, I have been unable to ascertain the existence of many Whipped Cream spoofs I find listed on the internet. You may find them. And some of those on CD listed above may have album versions, but I haven’t seen them either.

So this concludes my foray into spoof albums. It isn’t exactly comprehensive, but it’s a start. I know Weird Al Yankovic has put out spoof jackets for Nirvana and Michael Jackson albums, but I haven’t run across them. Good luck in your search, should you decide to add spoof albums to your growing collection!

Next time, we will take a look at the cool James Bond related album art that are not soundtracks to the Bond movies.