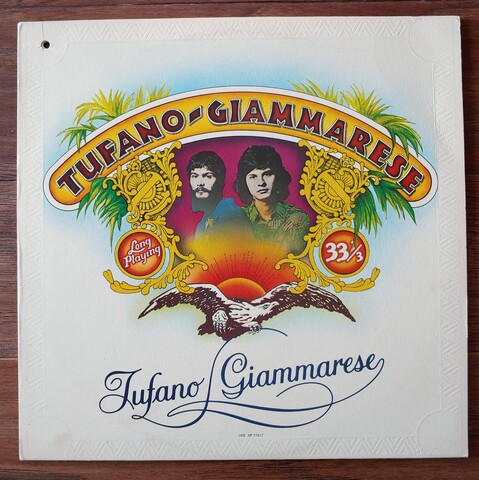 Every once in a long while I am very pleasantly surprised by the music on an album I purchased solely for the jacket art. A prime example is the Tufano-Giammarese album pictured. If you read my previous article about tobacco-related album jacket art, then you know why I bought this album. I recently purchased this record from a used book and record store, drawn to it by the great tobacco label-style cover art by John Cabalka.

The record was released by A&M/Ode Records in 1973. I was not familiar with Dennis Tufano or Carl Giammarese, the duo performing on the lp, so I was surprised when a search of the internet revealed that Tufano was the original lead singer of the Buckinghams (Kind of a Drag, Don’t You Care?, Hey Baby (They’re Playing Our Song), Susan, etc.), and Giammarese was a founding member of the Buckinghams.

This, the first of three Tufano & Giammarese albums from Ode, contains very nice, smooth harmony vocals. All songs are written by either Tufano or Giammarese, with the exception of a decent cover version of Lennon & McCartney’s “I’m A Loser.” The album also features Carole King on piano on two songs. Only one song, “Music Everywhere”, from this album charted – peaking at 68 on the Billboard chart on June 2, 1973. The song was on the chart for 8 weeks. Surprising is that it is likely my least favorite cut on the album. Despite their fame in the mid to late 60’s, Tufano and Giammarese’s musical efforts, post-Buckinghams, just didn’t get the promotion or recognition they probably deserved.

That’s one reason I continue to search for “new” music from the 1970’s, because I know that a lot of great music went virtually unheard due to the song limitations of Top 40 radio. If the record company didn’t put enough money behind a songwriter, pushing or paying radio stations to play songs, fame was unlikely. I think that is even more true today in the absence of Top 40 radio.

I know that die-hard music lovers can tell you about songs they love that you’ve never heard of, often by artists that you have never heard of or deep cuts from albums that never got any play time. That, to me, is the beauty, and also a sad aspect, of music. No matter how much music you listen to, you will never hear all the great music out there.

The harmonies on this album remind me of the harmonies of Bread, Batdorf & Rodney, Brewer & Shipley, and other 70’s contemporaries. Links are attached to “She Takes Me There,” by Dennis Tufano (here), and “Can You Say What You Need”, by Giammarese (here), two cuts I particularly like from the album. If you like them, check out their other songs. I think most songs from this album were uploaded by another fan to YouTube. While I particularly like the songs on this album, I will say by that checking out songs on YouTube from the duo’s two subsequent albums, I am not inclined to buy either. They just don’t have the same relaxing feel that this album has. And remember, I only bought this album because of the jacket art…….. What are the odds that of their three albums, the one with the tobacco label art turned out to be music I actually like?

It never ceases to amaze me the number of album jackets I see that make me ask, “What the heck were they thinking when they approved this jacket art?” I know times have changed, that wokeness can find fault with even the most innocent of intentions, but then again, there are some album jackets that likely should have never seen the light of day. Other jacket art is fine by me, even drawing me to it, but couldn’t get a thumbs up in today’s overly critical society. Following is a sampling of such covers, according to me. I love them all, so their perceived politically incorrectness probably makes me like them more. 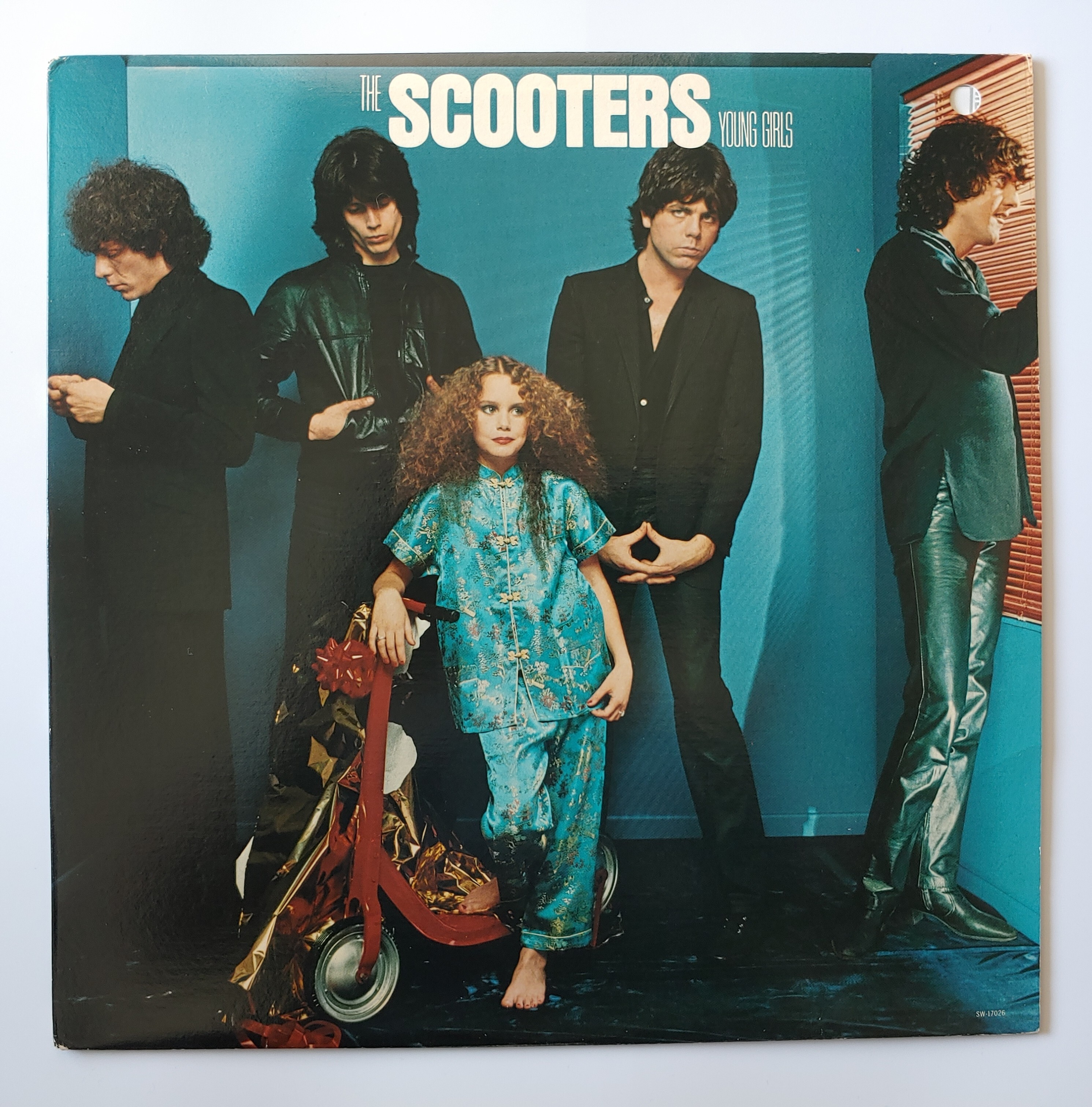 This album was released by EMI America Records in 1980. It looks like the group, whose music was described as new wave and “power pop”, released two albums, this one and “Blue Eyes” released in 1981, and then the members went their separate ways. The Scooters are not to be confused with the later German techno band, Scooter.

The jacket art for this album is downright creepy today and I’m sure would have been viewed as such even in 1980 – four “adult” band members in a dark room, venetian blinds drawn with one member on the lookout, with a young girl, in pajamas (?), with a scooter which appears to be a present. I guess the scooter makes it alright……. The lyrics to the title cut, “Young Girls”, doesn’t make anything seem innocent – “She’s in by five because she’s mommy’s baby,” “Oh, young girl don’t despair, Tell me, I’ll be there”, and “Breaking hearts before she’s into high school.” The lyrics to the album’s next song, “Big Brother”, leave nothing to the imagination as far as an attraction of an older boy/man to a young girl, so I think the jacket art conveys exactly what the songwriter was thinking, whether I agree with the thought or not. A search of the internet to see what the members are up to found one humorous comment on a music forum that said, “They’re probably in jail.” But in any case, a great politically incorrect album cover, in my humble opinion. 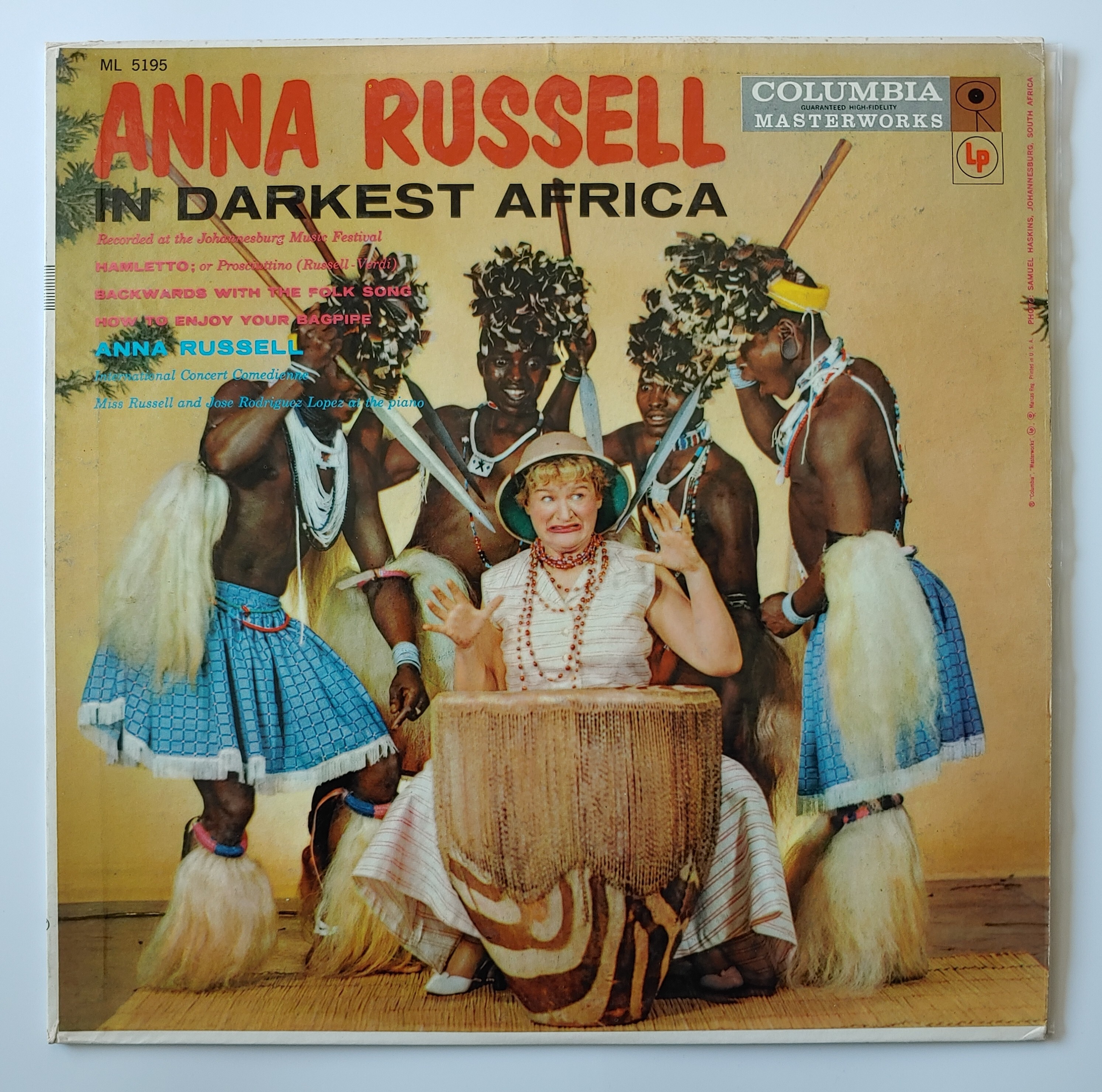 This album was released by Columbia Masterworks in 1957. The jacket pictures a perplexed Anna Russell, the “International Concert Comedienne”, appearing to be in a pot, about to be cooked by the stereotypical African natives surrounding her. Upon further inspection, she is actually sitting behind what I now assume to be a large drum.  But the natives don't seem to be happy with her presence. I wonder what today’s African people might think of this depiction. Oddly, the album was recorded at the Johannesburg (South Africa) Music Festival. 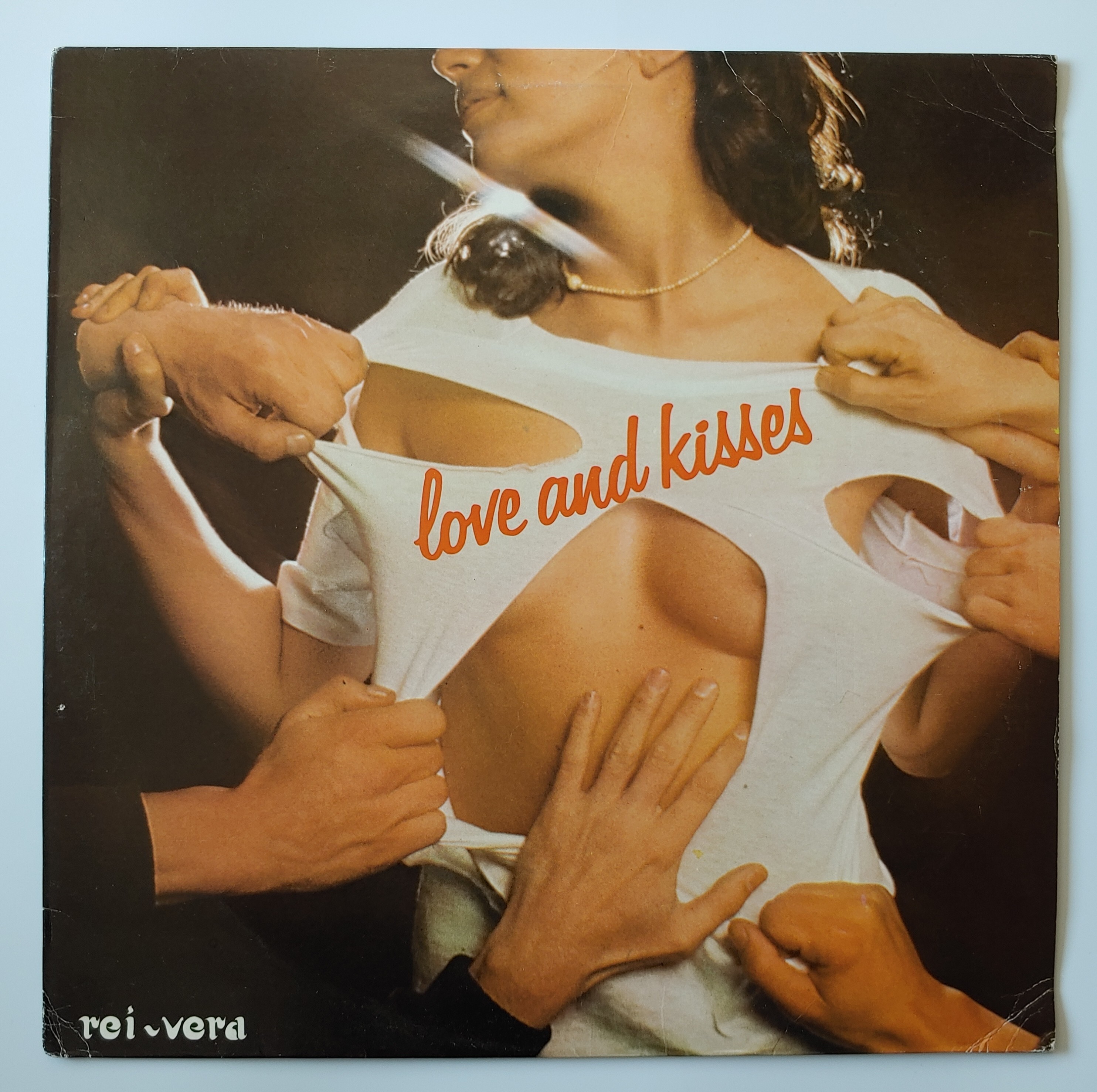 This 12-inch single was released in 1977 on the Rei-vera label. While I’m sure the jacket art was considered “sexy” at the time, in our politically correct world of today this looks like a gang rape to me, with what appears to be three men ripping off the woman’s shirt (although the hands in the upper right look like women’s hands to me). 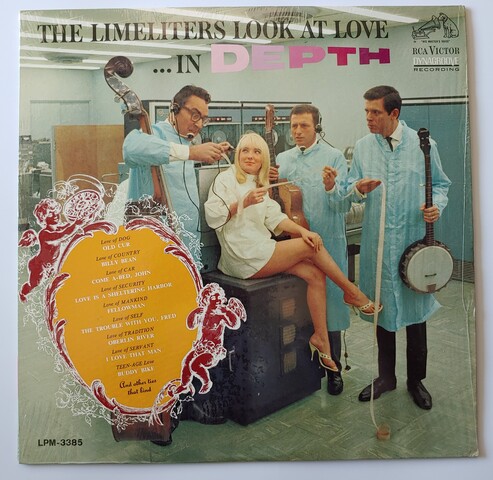 This album was issued in 1965 on the RCA Victor label. You can decide if the title is somewhat suggestive, with the band members ready to examine their scantily clad patient. I like the cover myself, but just thought the title was somewhat risqué for the times. 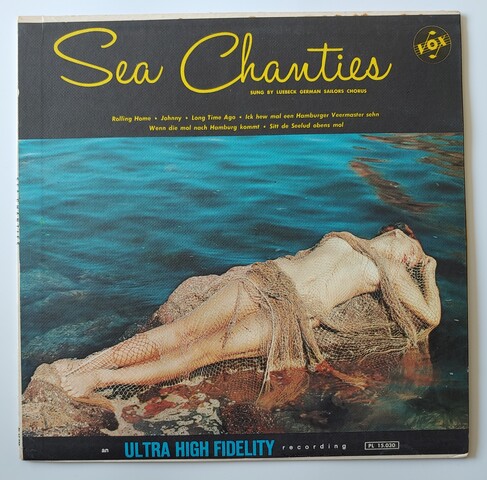 The next couple jackets may not be politically incorrect, but they pose the question, “Is that a cutie or a corpse?” You can run across a lot of these “cheesecake” covers – jackets that depict a young woman lying in the field, water, or elsewhere, I’m assuming to be viewed as sexy and inviting. Take a look at the “Sea Chanties – Sung by Luebeck German Sailors Chorus” album, originally issued in 1958 and reissued in 1963. I couldn’t find a 1958 copy to see what jacket art was used, but the 1963 was issued in black and white and color versions of the nude female 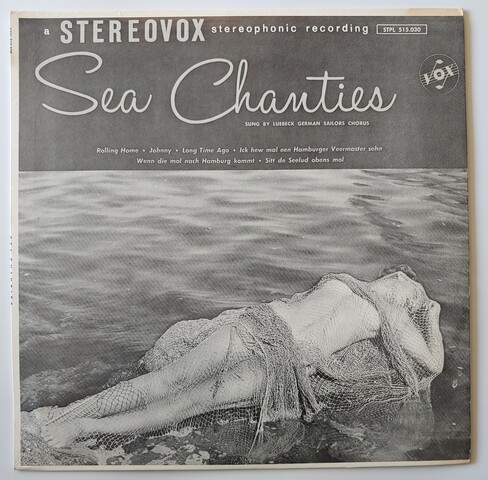 apparently dipped from the sea in a fisherman’s net. While I admit that the nude net-covered lady is sexy, my first thought was wondering whether she is dead or alive, or whether this might make a great opening scene for a CSI episode. While I like both jacket versions, I think I lean toward the color version as my favorite. I’ve seen stereo and mono versions in color, but I have not found a black and white mono version. But that doesn’t mean it’s not out there somewhere.

The Bonnie Guitar – Affair! album, issued in 1969 by DOT Records, has a similarly 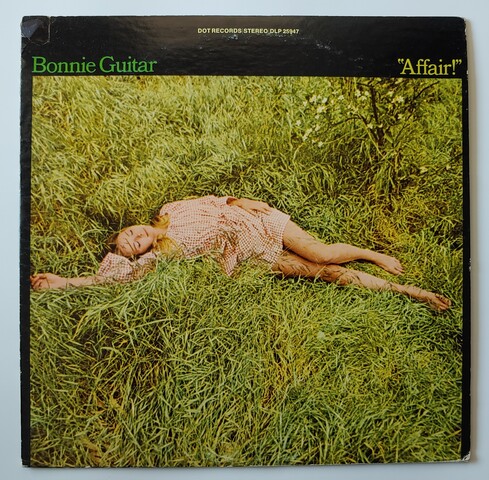 themed photo for the jacket art. Is that young lady in the field sleeping or dead? I’m not really familiar with Bonnie Guitar’s music, but if you look her up on the internet you will realize just how much music you haven’t heard, when you see the lengthy list of albums released over her lengthy career. Multiply that times millions, and that likely approximates what you haven’t heard yet. But again, I bought the album for the dead gal on the cover……. 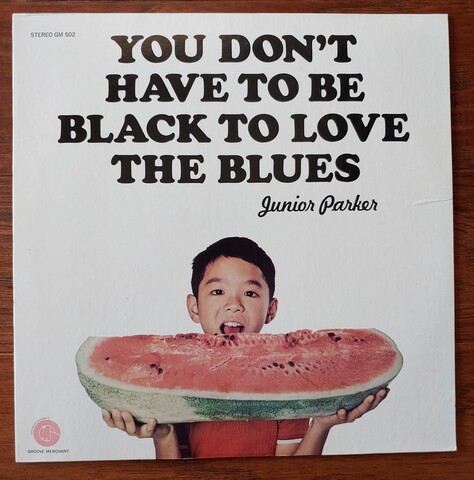 Is this jacket politically correct? Perhaps. It appears to show a child of Chinese descent (according to the liner notes) eating watermelon, as opposed to the stereotypical depiction of a black child eating watermelon. The back liner notes, by Sonny Lester, state, “Just like the cover of this album says, Chinese kids like watermelon, Irish like bagels, black people like Jewish rye bread, and today everybody loves the Blues.” This album was released in 1971 by Groove Merchant International, Inc., the same year Herman “Junior” Parker, Jr., died at age 39 during surgery for a brain tumor. 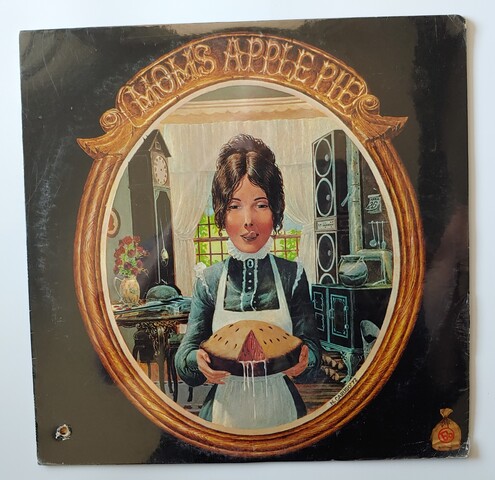 This album was released in 1972 on the United Artists’ label. The cover art, by Nick Caruso, became controversial when it was discovered, after the initial printing, that he had painted “female genitalia” into the cut portion of the pie pictured. Yeah, I guess that could be politically incorrect. Public outrage led to the banning of the cover, and an alternative cover was released. Caruso added a brick wall, topped by razor wire and the US flag, covering the missing slice, also adding a tear 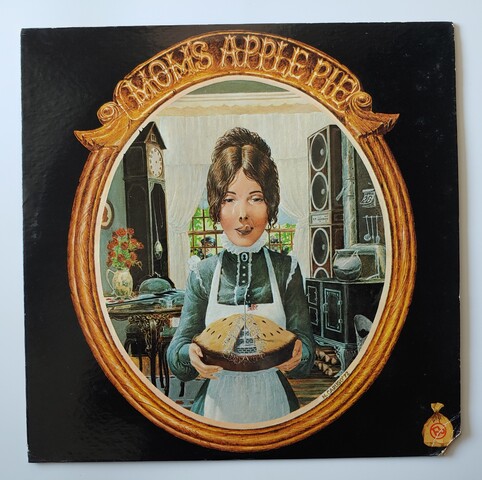 running down the woman’s face, with police looking in 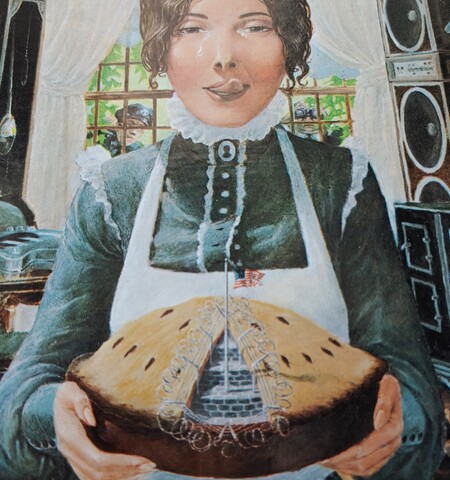 through the window. Quite humorous, and both covers are collectible to this day. It’s not a bad idea to have a bit of controversy to stimulate those record sales.

Well, that’s it for this article. I hope someone out there is getting some amusement out of these articles. If you have any comments, I can be reached at This email address is being protected from spambots. You need JavaScript enabled to view it.. I was talking to Boomerocity’s Randy Patterson about the various niches related to our love of music. There are plenty of folks who recognize songs but can’t tell you the name of the musical artist. There are those who love songs by various groups but can’t tell you the name of any individual group members. A group may be your all-time favorite, yet you may have no desire to read the group’s biography, because all you care about is the music. With Top 40 radio a lot of folks bought 45 rpm records and likely never bothered to buy an album. So I know my appreciation of album art is shared by even fewer folks, slanted more to art lovers than music lovers. But that’s the great thing about collecting – collect what you love, regardless of value or popularity. It’s all personal. Good luck hunting!