Coulda Shoulda Woulda is the eighth Holly Golightly and the Brokeoffs album and will likely be considered her most definitive album, to date. That’s not just my opinion. Listen to the lady, herself.

“I think that it’s the jewel in our crown. I think it’s absolutely amazing, to be release October 16, 2015 on Transdreamer Records. When you do something for a really long time, it stands to reason that you’re gonna become more proficient at it.”

Anyone who’s followed the artist during her long and prolific career knows that she’s not prone to braggadocio or self-promotion. So when she expresses such enthusiasm about her own work, one tends to pay attention.

Over the course of a career that spans over 25 years and more than 35 albums, the English singer-guitarist has established a singular niche as one of rock ’n’ roll’s fiercest iconoclasts.

Having built a powerful and influential body of U.K.-based work that established her as an indie/D.I.Y. icon, she relocated to a farm in rural Georgia to establish a new creative identity as half of Holly Golightly and the Brokeoffs, a scrappy, resourceful duo with Texas-bred multi-instrumentalist and sometime vocalist Lawyer Dave. Over the course of six albums, the pair has carved out a catalog of elegantly idiosyncratic Americana, drawing from a bottomless well of country, blues, folk, gospel ands rockabilly influences to create music that’s deeply personal and effortlessly accessible.

The 12-song Coulda, Shoulda, Woulda boasts some of Holly and Dave’s most accomplished and compelling work to date, with Holly’s unmistakable voice gracing such persuasive tunes as the raw gospel-thrash workout “Heaven Buy and Buy,” the fearsome white-trash tango “Apt. 34,” the bittersweet waltz “Jackhammer,” the heart-tugging holiday-themed “Christmas Is a Lie” and the crunching, anthemic title track. Lawyer Dave lends his distinctive vocal growl to the gospel-inflected “Jump in the River” and “No Judgment Day,” the dance-crazed “Karate” and the desolate duet “Lonesome Grave.” Meanwhile, the twosome indulge their taste for oddball vintage covers with “Marijuana, the Devil’s Flower,” a cautionary country tale originally recorded in the 1950s by the mysterious Mr. Sunshine.

As they have with their last few albums, Holly and Dave recorded Coulda, Shoulda, Woulda on the Georgia farm that they share with various horses, dogs, chickens, geese and goats, calling in neighbor Jeff Walls, of Woggles/Guadalcanal Diary fame, to add guitar on three tracks.

“I’m really thrilled with this one, and I really think that it’s exceptional and shows how far we’ve progressed,” Holly asserts. “We’re always asking ourselves, what can we do on this one that will be different, that will make it interesting for us and interesting for other people? I really like the short song format, because if a song is written from the heart, it can tell a story and it can make you feel all these things.  Or it can just go ‘gabba gabba hey,’ and it can still make you feel something.

“I’ve always tried to be a one-take wonder,” she continues. “If I’m familiar with the song and know what I’m doing, the first, second or third take will generally be the one that I’ll go with. If I sing it any more than that, it’s probably gonna sound contrived. I don’t look at a record as a perfect representation, or the ultimate version of the song; it’s just what the song sounded like on that day, or on that take.”

Born in the Kensington section of London, in the same hospital that Jimi Hendrix died in, Holly Golightly grew up in a bohemian household and was drawn to music early in life, embracing punk rock and vintage soul and eventually falling in with the now-legendary Medway rock ’n’ roll scene via her then-boyfriend Bruce Brand, drummer of Billy Childish’s seminal garage-primitive combo Thee Headcoats. Although she’d never sung a note in public previously, an impromptu guest spot singing with Thee Headcoats led to Holly becoming a member of that outfit’s sister group, Thee Headcoatees, with whom she recorded eight albums.

In the years that followed, Holly built a massive and influential body of work, releasing more than 20 solo albums as well as numerous singles and EPs for a variety of independent labels, including Damaged Goods, Kill Rock Stars, Super Electro and Sympathy for the Record Industry. Her stature as an indie role model led to her collaborating with such friends and admirers as the White Stripes (on whose Elephant album she’s featured), Mudhoney, Rocket from the Crypt and the Greenhornes.

In 2007, Holly officially teamed with Lawyer Dave, who had been playing stand-up bass in her touring band for several years, to form Holly Golightly and the Brokeoffs, which debuted that year with the acclaimed album You Can’t Buy a Gun When You’re Crying. That release was followed by Nobody Will Be There, Dirt Don’t Hurt, Medicine County, No Help Coming, Sunday Run Me Over and All Her Fault.

Recording as a self-contained duo, and performing live with Holly singing and playing guitar, and Dave playing guitar with his hands and drums with his feet, Holly Golightly developed a raw, immediate sound that’s distinct from Holly’s other projects, and perfectly suited to their lyrical explorations of such quintessentially American themes as love, whiskey, religion and guns. She also found time to return to her British roots, reconnecting with her old London-based backing band to record 2015’s Slowtown Now! for the Damaged Goods label, set for September 11, 2015 U.S. release.

The Brokeoffs, Holly notes, “is the first true collaboration I’ve ever been involved in, so it took me awhile to learn to do it this way. It takes a bit longer when two people have to agree on things, and I didn’t have a lot of patience for that in the beginning because I’d gotten used to having everything my own way  But I’ve come to value the benefits of collaboration. Dave has very different interests from me, and he takes a lot of care, and he won’t let things slide the way I sometimes would. We also hear things differently, so that makes it a good mix. There’s a lot of spontaneity in what we do, but there’s also a lot of regard given to every layer and every element.”

After a quarter-century of music-making, Holly Golightly’s creative passion remains as strong as ever. “When I started recording, I had no ambition, and I wasn’t thinking  far ahead,” she says. “If somebody had told me when I was 17 that by the time I was 45 I would have done all this stuff, and that I’d still be up in front of people singing songs I’ve written, I would have said that there’s no way I’d have the balls to do that. It still surprises me that I can look back on all of these records like a diary, and that I can see them as part of the process of me learning how to do this and how to plough my own path.

“I never set out with any particular strategy or ambition, and I still don’t have one,” she concludes. “It just comes from luck and tenacity, and from being completely indifferent to what everybody else is doing. I love writing songs and playing music, and I’ve always worked my tits off to be able to have music in my life. Everything else in my life is hard graft, but music is what I do for fun.” 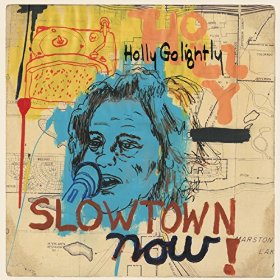 Carmine Appice Talks About His Appice - Perdomo Project
203 views
Posted October 2021   Click Above To Order Your CopyThe interview on this page is the second ...

Peter Asher Talks About The Beatles A to Zed
Honey County Talks Kevin Costner, Yellowstone, and Their Latest Music