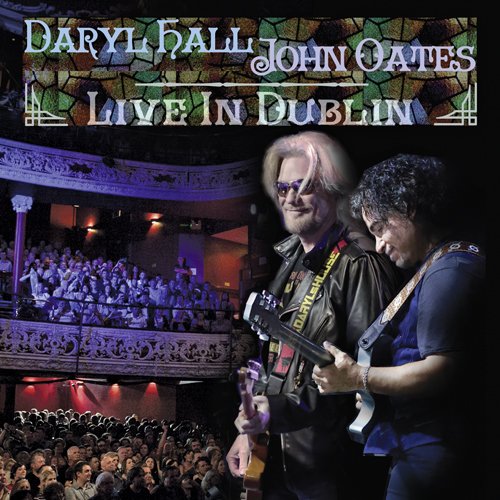 One of the most listened to and prolific songwriting and performing teams to come out of the seventies are Daryl Hall and Johan Oates. If I mention hits like “Rich Girl,” “Kiss On My List,” “Private Eyes,” “I Can’t Go For That (No Can Do),” “Sara Smile,” or several others, the sounds crawl out of the gray matter of your brain and to the forefront of you mind – instantly!

Not surprisingly, Rock and Roll Hall of Fame-inductees Daryl Hall and John Oates are the Number 1 selling duo in music history, with 7 platinum albums, several gold albums, and a string of hit singles, including six US #1 hits on the Billboard Hot 100.

Their Philadelphia-bred blend of rock and soul captured the city’s signature sound and brought it to the masses, inspiring a wealth of modern artists, while solidifying their stature as musical icons.

Daryl Hall And John Oates: Live In Dublin (on DVD+2CD, Blu-ray and Digital Formats) is the duo’s first concert video in seven year and it’s been well worth the wait! Philly-style soul served up with stellar musicianship – that’s exactly what’s in store with Live In Dublin.

The film kicks off with a direct quote about the heart and soul of this group: “It’s not about stadiums and smoke bombs…it’s about real playing.” And that’s exactly what’s delivered on Live In Dublin.

Filmed at the Olympia Theatre on July 15, 2014, this set features the duo’s first ever concert performance in Dublin.  Daryl Hall and John Oates dipped into their 40+ year rich repertoire to deliver a setlist steeped in hits: “Sara Smile,” “I Can’t Go For That (No Can Do),” “Out Of Touch,” “Kiss On My List,” “Private Eyes,” “Rich Girl,” “Maneater,” and many more. It’s fitting that this high-energy 15-song concert film traverses songs from across their career, as Hall promises the audience that their “making up for lost time” in a city they’ve never performed in before.

While each and every tune performed is amazing in their own right, Boomerocity’s favorite part of this CD/DVD collection is the bonus interview with Daryl Hall and John Oates. It’s insightful and gives their take on the phenomenal members of their band.

This is a must have CD/DVD package for fans and music buffs, alike.

Jeffrey Morgan - The Creem of the Crop of Confidential Rock Critics
530 views
Posted October 2021 Click Above To Order Your CopyAs a teen in the seventies, I didn’t get to buy a...

Graham Nash Talks About His Album, Over The Years
Damon Johnson Discusses "Echo"