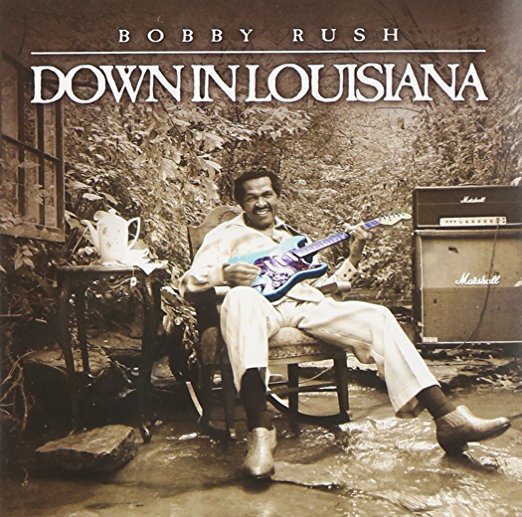 Boomerocity readers already know that this site is a huge fan and supporter of the blues. So it should come as absolutely no surprise to any of you that Boomerocity is pogo-stick thrilled to tell y’all about Bobby Rush’s new CD, Down in Louisiana. Its 11 songs revel in the grit, grind and soul that’s been the blues innovator’s trademark since the 1960s, when he stood shoulder to shoulder on the stages of Chicago with Muddy Waters, Howlin’ Wolf, Little Walter and other giants.

Of course, it’s hard to recognize a future giant when he’s standing among his mentors. But five decades later Down in Louisiana’s blend of deep roots, eclectic arrangements and raw modern production is clearly the stuff of towering artistry.

“This album started in the swamps and the juke joints, where my music started, and it’s also a brand new thing,” says the Grammy-nominated adopted son of Jackson, Mississippi. “Fifty years ago I put funk together with down-home blues to create my own style. Now, with Down in Louisiana, I’ve done the same thing with Cajun, reggae, pop, rock and blues, and it all sounds only like Bobby Rush.”

At 77, Rush still has an energy level that puts those of us several years his junior to embarrassment and shame. He’s a prolific songwriter and one of the most vital live performers in the blues, able to execute daredevil splits on stage with the finesse of a young James Brown while singing and playing harmonica and guitar. Those talents have earned him multiple Blues Music Awards including Soul Blues Album of the Year, Acoustic Album of the Year, and, almost perennially, Soul Blues Male Artist of the Year.

As Down in Louisiana attests, he’s also one of the music’s finest storytellers, whether he’s evoking the thrill of finding love in Down in Louisiana — a song whose rhythmic accordion and churning beat evoke his Bayou State youth — or romping through one of his patented double-entendre funk rave-ups like You’re Just Like a Dresser.

Songs like the latter — with the tag line “You’re just like a dresser/Somebody’s always ramblin’ in your drawers” — and a stage show built around big-bottomed female dancers, ribald humor and hip-shaking grooves have made Rush today’s most popular blues attraction among African-American audiences. With more than 100 albums on his résumé, he’s the reigning king of the Chitlin’ Circuit, the network of clubs, theaters, halls and juke joints that first sprang up in the 1920s to cater to black audiences in the bad old days of segregation. A range of historic entertainers that includes Bessie Smith, Cab Calloway, B.B. King, Nat “King” Cole and Ray Charles emerged from this milieu. Rush is proud to bear the torch for that tradition, and more.

“What I do goes back to the days of black vaudeville and Broadway, and — with my dancers on stage — even back to Africa,” Rush says. “It’s a spiritual thing, entwined with the deepest black roots, and with Down in Louisiana I’m taking those roots in a new direction so all kinds of audiences can experience my music and what it’s about.”

Compared to the big-band arrangements of the 13 albums Rush made while signed to Malaco Records, the Mississippi-based pre-eminent soul-blues label of the ’80s and ’90s, Down In Louisiana is a stripped down affair. The album ignited 18 months ago when Rush and producer Paul Brown, who’s played keyboards in Rush’s touring band, got together at Brown’s Nashville-based Ocean Soul Studios to build songs from the bones up.

“Everything started with just me and my guitar,” Rush explains. “Then Paul created the arrangements around what I’d done. It’s the first time I made an album like that and it felt really good.” Rush plans to tour behind the disc, his debut on Thirty Tigers, with a similar-sized group.

Down in Louisiana is spare on Rush’s usual personnel, — Brown on keys, drummer Pete Mendillo, guitarist Lou Rodriguez and longtime Rush bassist Terry Richardson — but doesn’t scrimp on funk. Every song is propelled by an appealing groove. Even the semi-autobiographical hard-times story Tight Money, which floats in on the call of Rush’s haunted harmonica, has a magnetic pull toward the dance floor. And Don’t You Cry, which Rush describes as “a new classic,” employs its lilting sway to evoke the vintage sound of electrified Delta blues à la Howlin’ Wolf and Muddy Waters. Rush counts those artists, along with B.B King, Ray Charles and Sonny Boy Williamson II, as major influences.

Although his TV appearances, gigs at Lincoln Center and numerous Blues Music Awards attest to his acceptance by all blues fans, Rush hopes that the blend of the eclectic, inventive and down-home on Down in Louisiana will help further expand his audience.

“But no matter how much I cross over, whether it’s to a larger white audience or to college listeners or fans of Americana, I’ll never cross out who I am and where I’ve come from,” Rush promises. “My music’s always gonna be funky and honest, and it’s always gonna sound like Bobby Rush.”