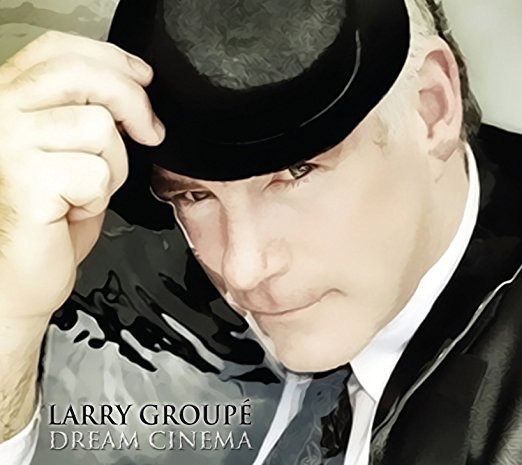 Some people dream in black and white. Others dream in color. Some people claim to never dream. In the case of Larry Groupé, he carefully crafts his dreams into vivid, rich, cinematic, audio-technicolor on his new CD, Dream Cinema, the follow-up album to his 2009 debut masterpiece, Excelsius.

Within Dream Cinema, Groupé beautifully shapes a rich spectrum of colors and moods – feelings, if you will – from his wealth of experience scoring films where his indelible, musical imprint has been made as musical composer. Dream Cinema leads listeners through a wide range of moods and emotions, compelling them to craft their own rich mental images that will remain in pleasant, soothing perpetuity.

“I want to push every possible border in making it quite clear which emotion I’m trying to convey – emotions can change drastically within each song.” Groupé says of the intent and process of crafting such a deep and intense audio palate for his Dream Cinema.

“Creating my own album contrasts a lot of scoring that I do, which I feel today is very safe and very mood driven. It’s almost like you get on first base but you really don’t go much further. Scoring Film and TV can become static, my creativity is challenged in a different way when I’m making an album.”

Progressive rock fans will likely remember Groupé by his work on Yes’s 2001 album, Magnification, as well as his work as arranger and conductor for Yes’ orchestra on their Symphonic World Tour in 2001 – 2002. Movie and television buffs will remember Larry as a three-time Emmy Award Nominee and two time Emmy Award Winner who has composed and scored music for over thirty feature films such Academy Award-nominated The Contender, Nothing But The Truth, Resurrecting The Champ, and, more recently, Straw Dogs.

From the opening strains of Dream Cinema’s sobering first piece, There Are Heroes Among Us, through the reverential awe-inspiring tones of the final composition, Reverence, Groupé takes the listener to levels of thought and introspection rarely experienced in cinematic scoring.

“What I’m hoping that people take from it is, back in the old album days, if you listened to the whole thing – which was the album concept – you walk away with the feeling of having been on a journey because you’ve experienced so many feelings and emotions. I like to think people will feel uplifted, taken away and left thinking.”

When the listener has finished the ministering sounds of Dream Cinema, they will easily see why Larry Groupé is considered one of the most talented and versatile multimedia composers in the world today.

As a sixteen year-old piano student and prog rock enthusiast, Larry Groupé heard classical music that touched his heart, he knew what he wanted to do with his life: compose great, dramatic music. He says of that epiphany, “YES was my favorite band as a kid and prog rock was everything to me. When I heard Stravinsky’s Rite of Spring when I was sixteen, that’s when the light bulb went off and the two came together. I knew then that this is what I wanted to do.”

Completing his Bachelors from the Conservatory of Music at University of the Pacific and, later, his Masters of Music in Composition at the University of California at San Diego, Larry studied at the feet of greats like Toru Takemitsu, Roger Reynolds, John Cage, and Pauline Oliveros. This rich education is something that he still draws from “virtually every day. It was a fantastic education – mainly because the schools were so different. Having those two contrasting educations was critically valuable as far as being diverse.”

Since that time – and in over twenty years in the music business, Groupé has had his hand in over 80 recordings, nominated for his work on ABC’s Line of Fire and HBO’s The Mind of the Married Man. He also won two Emmy awards for best documentary score for Jonas Salk: Personally Speaking and Residue, a short subject film about the US early involvement in Cambodia. Larry has contributed music for numerous Academy Award-nominated films, and has been commissioned to compose for the San Diego Symphony. A personal, thrilling accomplishment in Larry’s career was his work in 2001 with his favorite band as a teen, YES, on their album, Magnification, and their subsequent YESsymphonic tour to support it.

Speaking of his work with YES, Groupé says, “The funny thing with the YES project is that I actually replaced my idol, Rick Wakeman, on that record, because he was not on that album nor were keyboards in a traditional keyboards featured. The orchestra basically took over that role which is a huge palate to write to.”

Larry Groupé brings that treasure trove of diverse musical education, talent and to bear with his latest CD, Dream Cinema, an emotional and thought provoking symphonic journey. Larry reaches deep into his vast musical arsenal to take the listener to places rarely visited in the mind.

When asked about what he felt are the two signature pieces from Dream Cinema, Larry suggested the album’s last composition, Reverence. Of the piece, he says, “I think the melody is well conceived and I think it does deliver people to an emotional place. I’ve heard that over and over about that particular piece. It’s not a religious reference but there’s a spiritual connection that elevates the spirit. That’s why I chose that name.”

“The other piece would probably be, by contrast, the very first piece, There Are Heroes Among Us. It’s so epic! When you get to the ‘money’ part – the middle where it finally pays off in these massive chords – that’s why I do what I do. That’s a huge payoff for me, musically.”

And speaking of a huge payoff, the entire CD delivers dividends for the listener from the opening notes of There Are Heroes to the closing sounds of Reverence and every note played in between. Undoubtedly, Dream Cinema will be viewed by serious music connoisseurs as being a major body of work worthy of both serious listening as well as study.