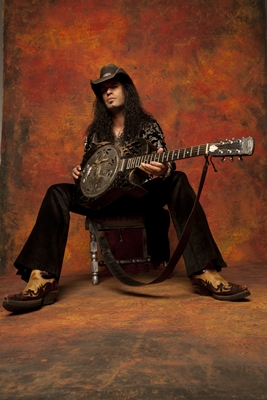 I love the blues.  In fact, if I had to pick only one genre that I could listen to for the rest of my life, a) it would be a hard choice to make and I would bitterly complain about it and, b) I would be hard pressed to think of a genre that would dethrone the blues.  There’s something about the blues that just hits you where you’re at no matter what you’re going through in life.

Recently, I was turned on to an incredible blues player that blew me away with his style and performance. His name is Eric Sardinas and his band is Big Motor and, I’m telling you: You haven’t heard blues quite like this cat produces.  He’s a prolific slide guitarist and his weapon of choice is an electric resonator guitar.  His musical alchemy takes the basic elements of rock and blues and creates melodic gold that will both entice and thrill even the most discriminating blues enthusiast.

After writing a review of his latest project, Sticks and Stones, which drops September 13th, I had the opportunity to interview Sardinas by phone.  Relaxed but clearly anxious to hit the road for a short tour before heading to Europe, Erik was most gracious and engaging during our chat.

For the benefit of those of you who haven’t heard of Sardinas before, I asked him to give me the Reader’s Digest version of him and his work.

“I’m, basically, been a live band and pretty much forged my way through music – within music – by being a live band and have dedicated myself to pushing the boundaries of myself musically through the blues and blues rock genre – my style, through live performing and non-stop touring. That’s pretty much been the recipe for how I’ve been growing as a musician and, also, creating the music that I’ve recorded on the past albums.”

I knew that Eric had first picked up the guitar when he was six years old and was heavily influenced by his mother’s collection of gospel, Motown, soul and early rock and roll.  I was curious as to how old he was when he formed his first band and what kind of band it was.

“First band. Wow, I don’t know. I played in a lot of different bands when I was in school. I was always listening to blues and playing blues. There were some rock bands that I played in in school. Then I started doing my blues thing simultaneously, you know?”

I hate asking people that I interview questions that I know they’ve been asked a million times but sometimes they’re just hard to avoid.  In the case of Sardinas, I had to ask him: What made you chose an electric resonator guitar as your weapon of choice? Despite the fact that he was now answer the question for the “million and oneth” time, he was gracious in his answer.

“I don’t know, I really fell in love tonality and energy of resonator guitars. I think that was just my romance and my love for acoustic blues and the energy of pre-war country and Texas and Mississippi delta blues. I really found myself within that energy. I wanted to push that sound into a different place - the energy and the way that I play my kind of blues.  In fact, that instrument kind of grew with me and I took it outside of the box and I pushed the limits with it.”

As I do with many of the guitar slingers I interview, I was curious as to, a) how many resonators did Sardinas own and, b) is there a “holy grail” that he’s just dying to add to his collection.

“You know, I salivate a little bit when I see something I really like in the resonators. Yeah, I’m a big fan of the early National’s and, of course, anything that has that sort of mojo on it – something that I really connect with.”

Since I’m absolutely nuts about his latest CD, Sticks and Stones, I asked Eric to share how it all come about and what sets it apart from his previous five albums.

“This album’s been a long time coming – not in any other way but that it’s just been awhile since our last release. We were on the road non-stop. There were a lot of ups and downs.  The road takes you in all sorts of different ways. It was a long time coming and I think the motivation behind these songs – each song was a culmination of moments and places in time that everybody finds themselves at one point or another. I think these are moments and bits of that.  This album was really about capturing the energy of the band and bringing these songs to where I felt deserved to be with that energy.  That’s something that I’m always concerned about – in the studios – to capture that energy.”

“I think each record is like a stepping stone in one way or another. Also, it’s like moment of time of where I’m at. This album – my goal was to really push myself musically and lyrically.  I feel that it came out very natural, as it should. There wasn’t anything forced. It was very natural. The songs all came from the heart.  There’s no sense of this album being forced or reaching too far out of the box. I think it has maturity and that it’s a move forward.”

Every artist approaches their craft differently – sometimes very uniquely.  For some, the music is easier for them to create.  With others, the lyrics come easy to them.  What’s the easiest part of it for you, creating the music or writing the lyrics?

“I think everything is kind of organic. I think it all melds itself together. There’s no real recipe I have for writing. Sometimes it’s lyrically; sometimes it’s musically. I never work on anything from front to back. Each song has its own energy and it comes together in my mind. I learned by ear and I don’t read music so I’m very unorthodox in the way I write and memorize things. I’m left-handed and I play right-handed. So, yeah, everything is a little unorthodox. It’s just one of those things where each song comes out differently. Some slow. Some take their time talking to me.”

I comment that blues just seems to be that way, lending itself to a natural, organic creation process.

“Yeah, exactly! It’s close to the human heart. It has that primal kind of beat to it that connects the energy, you know?”

As for how the crowds are reacting to the new tunes being included in the band’s live set, Eric says, “I like to play all of the record. We never really play the same song the same way twice. We’re always mixing it up. It’s been good. I think people are diggin’ it and I’m really enjoying playing it.”

While on the subject of his live shows, I asked Sardinas what people can expect from one of his shows.

“If you love your music and if you love the energy of a live show and of the blues – if you love your southern blues rock and like to get a little loose then it’s something then to where you should expect a little of the unexpected. It’s really about having a musical experience; about having a good time and connecting with what you need to be connected with and forgetting about all the things you need to forget about for a little while. When you take something away with you that makes you feel good, that makes me happy.

“Sometimes people need to see something or to actually experience it because it’s hard to explain.  ‘Oh, it’s blues’ or, ‘It’s rock’.  It’s what it is. I have my own voice. One of the worst questions people can ask is, ‘What’s your style?’  I just go, ‘It’s just what it is, man! Just come to the show!”  He says with a laugh.

With the economy in the toilet and the world facing dark geopolitical clouds, I asked Eric if he sees these things affecting the vibe of the crowds that he plays to.

“I have a song – and everybody has a song for everything they’ve been through – music’s the one thing that gets you through everything you’ve been through – good, bad, the ups and the downs.  There’s always been music for you there.  That’s really the romance of coming to see a show. I don’t think it’s escapism. I think it’s to feel music and to be plugged in to that place you go when you’re connecting to that. It’s part of the spirit.”

Great musicians tend to gravitate towards each other and find themselves sharing stages and studios.  While conducting my research before my interview with Sardinas, I saw found that he certainly was no exception to this trend, having jammed with the likes of such greats as Steve Vai and Johnny Winter.  Who else would Eric like to play with?

“There’s a lot guys out there. There’s so many great players. I had the pleasure of playing with Les Paul. That was great!  He had a series he would do called Les Paul and Friends and we got together and played a song together.  Jimmy Page.  I’d like to jam with him for a little while.”

Eric Sardinas and Big Motor have logged a lot of miles and years on the road, delighting crowds the world over.  With Sticks and Stones hitting the market, I asked the slide guitar virtuoso what his plans were for the next year, five years and ever ten years.  His answer revealed a man who knows where he is, where he’s going and what it takes to get there.

“We’re really going to hit the ground running here. We’re really looking forward to the release once the album’s out. We’re going to be doing the road – we’re going to be on the road pretty consistently. We’re pretty much gonna keep it pedal to the metal. New music is always being written in my mind as I’m travelling so I guess, technically, I’m always moving forward with where I’m gonna go next.

“We’re going to be hitting Europe after this short run her in the States. At the end of September we’re going to Spain, Italy, Austria, Switzerland. I think we have something like 20 shows through Deutschland. We’ll end up back in Spain and the U.K. Then we come back and hit the states and continue on.”

I asked Sardinas to fast-forward the tape of his life to when he’s stepped off the tour bus for the final time and his life on earth is over, how does he want to be remembered?

“I suppose that it would be along the lines that I definitely put it all out there and I didn’t do anything except give it all I had.”

After watching this video of this man’s performances and feeling the incredible energy from his CD’s, I don’t think there’s any question that he’s accomplishing exactly that.

You can keep up with the latest happenings in Eric’s world, his touring schedule and even purchase his great CD’s by visiting www.ericsardinas.com.  Be warned: You’re going to be hooked.