Everybody Wants to Go to Heaven 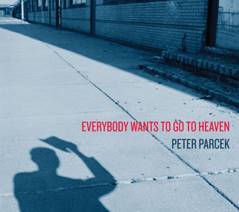 Everybody Wants to Go to Heaven

“Marco Giovino had uniquely powerful musical concepts and presence, plus tremendous rhythmic and arranging ideas,” Parcek said about the recording sessions. “His innovative sound and feel profoundly imbue and impacted the album.

“In addition to being an inspiring producer, player and arranger, Marco assembled a phenomenal band for the recording sessions in Nashville: Luther Dickinson, Mickey Raphael, Dennis Crouch (T-Bone Burnett, Diana Krall) Dominic John Davis (Jack White) and many more luminaries. We even made a trip to Fame Studios in Alabama to record with the great Spooner Oldham.”

In particular, Luther Dickinson added his special guitar mojo magic on four tracks, the perfect complement to Parcek’s incendiary guitar work. “Luther is a tremendous artist and guitarist in his own right; he’s musical royalty,” Parcek adds. “He’s very inspiring to play with - at once gracious, generous and musically badass. We tore it up and had a ball!”

Peter Parcek's lightning-strike guitar playing has been electrifying audiences in America and abroad for years. Now, he’s back with a new album brimming with compelling original blues and select covers. The CD opens with his powerful, ominous take on Peter Green’s “World Keep on Turning,” which Parcek embellishes with a Hendrixian “Voodoo Child” guitar sound. Peter also makes the Don Nix-penned title track his own, with a moody, atmospheric delivery, quite different than the standard reading of the Albert King original. And on the album’s closer, “Aunt Caroline Dyer Blues,” he demonstrates the breadth of his understanding of the blues/roots idiom with a transformational version of Jennie Mae Clayton (The Memphis Jug Band) 1920s song.

Everybody Wants to Go to Heaven also features three instrumentals where Parcek’s brilliance as a guitar player really shines, especially on “Pat Hare,” named for the 1950s blues sideman of Muddy Waters, Howlin’ Wolf and James Cotton, whose distorted power-driven guitar work was an influence on generations of guitarists.

Parcek was nominated by the Blues Foundation for The Mathematics of Love, his previous full length release in 2010.   The CD earned him a much-deserved Blues Music Award nomination for “Best New Artist Debut”. Parcek is also the 2013 New England Music Awards “Blues Artist of the Year” and the Blues Audience Magazine 2012 “Guitarist of the Year,” in addition to multiple nominations by the Boston Music Awards.

His earlier credits also include touring and recording with legendary keyboardist Pinetop Perkins (Peter appears on Mr. Perkins’ On Top) and as a sideman with great bluesman like Hubert Sumlin.

Parcek’s live shows and recordings are powered by his daring, incendiary, and soulful electric guitar, and a singing style that, like his original songs, fuses the vitality of today with echoes of the Delta, mountains and prairies where the greatest American music was born.

The heart of Peter’s playing, singing and writing is rooted in the blues, both ancient and modern.

He possesses an unparalleled ability to blend influences that embrace roots, folk, country, rockabilly, surf, jazz and gypsy music into his own distinctly original hybrid. And overall, his fluid, expressive playing simply leaves jaws dropped to the ground. (“You're as bad as Eric Clapton,” Buddy Guy once told him. “And I know Eric Clapton.”).

Parcek's musical story, however, began on the stages of 1960s London, where his early bands were contemporaries of The Rolling Stones, Pink Floyd, and groups featuring Eric Clapton, Jeff Beck and Peter Green.

The young guitarist watched and learned well, finding a path that's led him through an evolution all his own. It’s taken him through smoky dives where he’s played for a dozen patrons and onto huge stages where he's played for 100,000. Over the years Parcek's opened for a smorgasbord of prestigious artists, including The Grateful Dead, Sheryl Crow, Susan Tedeschi, The Holmes Brothers, Koko Taylor, Robben Ford, Son Seals, Johnny Copeland, Charlie Musselwhite, Ronnie Earl, Duke Robillard, Roomful of Blues and many more.

Everybody Wants to Go to Heaven Track Listing

2.  See That My Grave Is Kept Clean (Blind Lemon Jefferson)

5.  Every Drop of Rain (Peter Parcek)

8.  Everybody Wants to Go to Heaven (Don Nix)