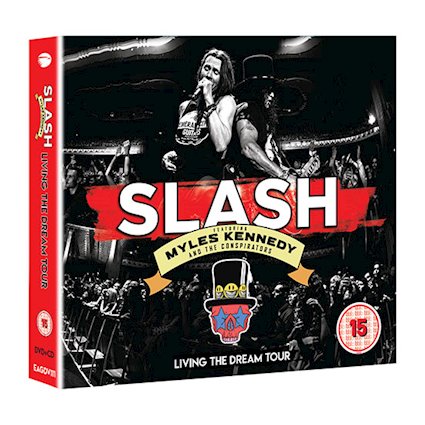 For most rock fans, all that would need to be written are the words, “Slash live on DVD” and sales would happen. That’s just how we Slash fans are. However, I realize that there is a small minority of people who require just a little bit more before they spend their hard-earned money on a concert DVD.

For you people, I have this to say:

Slash (along with Myles Kennedy) annihilates the Hammersmith Apollo (a great venue for rock and roll shows) with a two-hour sonic holocaust in the form of songs from Slash’s solo projects. Fans will drool as they hear their favorites like Anastasia, Call of the Wild, World On Fire, Driving Rain, Starlight, By the Sword, and Back From Cali. But the real killers what Slash and Myles deliver via Doctor Alibi, We Are All Gonna Die, and Shadow Life. Those three tunes are worth the price of the collection alone.

The show is available on DVD+2CD, Blu-ray+2 CD, 3LP Black Vinyl, limited edition 3LP Red Vinyl, digital video and digital audio. If that isn’t enough to entice you, then an extremely limited amount of signed copies will be available while supplies last. All you’ve got to do to purchase a copy is the visit: http://www.slashonline.com. If that still isn’t enough, the DVD/Blu-ray offers up interviews with Slash and Myles as well as behind the scenes footage from the tour.

With Christmas right around the corner, this would be a great gift for yourself as well as for the rock fans on your Christmas shopping list.

If you’re not already doing so, keep up with the latest from Slash at SlashOnline.com.