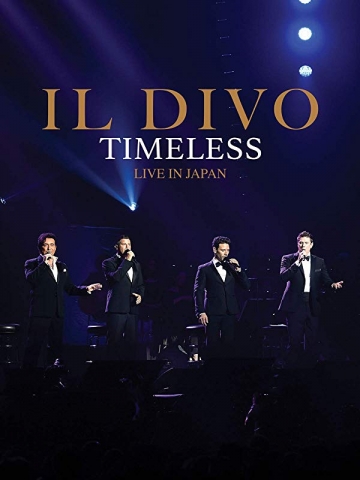 Boomerocity readers know that our “wheelhouse” is typically the areas of rock, blues, country, and R&B. However, we like to think that we cover almost anything that you, our loyal readers, would like to cover.

Such is the case with IL DIVO - TIMELESS LIVE IN JAPAN. Boomerocity loves these guys and their quality and volume of work.

IL DIVO - TIMELESS LIVE IN JAPAN celebrates the ground-breaking classical crossover group’s 15th Anniversary in a magical show, live from Tokyo’s Budokan Stadium – which has been the site of many a great rock show so you know this is good. Released on DVD, HD Blu-ray and digital, fans will love watching this phenomenal performance in the comfort of their own home.

Timeless Live in Japan witnesses the band, backed by a full orchestra, serenading their adoring fans with their unique classical take on both pop favorites and traditional standards in four languages, including “Regresa a Mi” (Unbreak My Heart), “What A Wonderful World”, “Smile”, “All Of Me”, “Angels”, and their acclaimed cover of Adele’s smash hit, “Hola” (Hello).

The show features the original line-up of Carlos Marin, Urs Buhler, Sebastian Izambard and David Miller. Separately, their vocal talents are awesome, but together they truly shine. Their audacious blend of classical and contemporary songs is delivered with an undeniable passion, while their crowd-pleasing musical theatrics are further enhanced by the dramatic production; including dancers, acrobats and big screen video elements.

Also included as a bonus feature is an exclusive interview with the band, recorded in Japan.

Il Divo said, "We very much enjoyed performing our live show TIMELESS, now we’re really excited that all our fans will get the chance to watch it on DVD and Blu-Ray".
Il Divo are the most successful classical-crossover group of all time, with global album sales in-excess of 30 million records. Their Timeless tour continues with a string of European dates in October/November 2019.

Pick up several copies of this video as gifts for the music lover on your gift list.