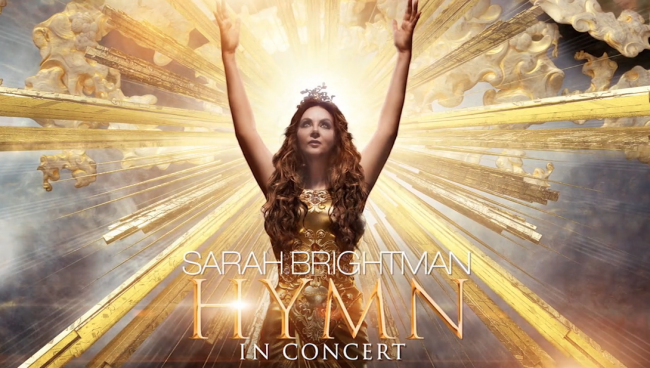 It has been said that immensely talented (and drop dead gorgeous) Sarah Brightman is the world’s most successful and best selling soprano. The HYMN In Concert film was released on DVD+CD, Blu-ray+CD and Digital Formats. It captures an amazing Her hair-on-our-arms-standing-up performance at the Festspielhaus in the enchanted Bavarian Alps, known for its magical lakes, mountains, castles, “cuckoo clock” houses, and the historic and captivating Neuschwanstein Castle.

Completely conceived and created by Sarah Brightman, Anthony Van Laast (Mamma Mia, Beauty and the Beast), and Frank Peterson, the two-act performance is a hybrid of a musical film and a large-scale concert production. Sarah is accompanied by her band, the Bavarian Philharmonic orchestra, a 50-voice choir and the Ludwig Ensemble of dancers, Special guest performers include Japanese superstar Yoshiki, Vincent Niclo, Mario Frangoulis and Narcis.

Bonus features on DVD and Blu-ray include exclusive behind the scenes footage, interviews and photo galleries, in addition to special packaging and a 15-track audio CD of music from the film! This is the kind of stuff Boomerocity loves to see with concert recordings.

Known for her three-octave range and for pioneering the classical-crossover music movement, Sarah Brightman has amassed global sales of more than 30 million units. The only artist to have simultaneously topped Billboard's dance and classical music charts, Brightman has achieved more than 180 gold and platinum awards in over 40 countries. She is also known for her iconic star turn in The Phantom of the Opera, whose soundtrack has sold more than 40 million copies worldwide. Her duet with Bocelli, “Time To Say Goodbye”, became an international success selling 12 million copies worldwide. HYMN In Concert will certain add to those numbers as well as to her growing fan base.