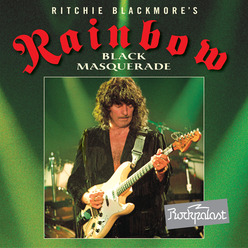 After his departure from Deep Purple in 1993, Ritchie Blackmore reformed Rainbow with a new line-up and went into the studio to record the acclaimed Stranger In Us All album. The band then took to the road for an extensive tour which included this 1995 live concert in Dusseldorf, filmed & recorded for Germany’s famous Rockpalast TV series. Entitled Black Masquerade, it is being made available in DVD, 2CD, digital video and digital audio formats for the first time. The video offered up in un-freakin’-believable, eye-popping color. It looks as though the concert took place last week instead of back in 1995.

The set features several tracks from the Stranger In Us All album alongside classic Rainbow and Deep Purple tracks, including Spotlight Kid, Long Live Rock ‘n’ Roll, Black Masquerade, Man On The Silver Mountain, Since You’ve Been Gone, Perfect Strangers, Sixteenth Century Greensleeves, Burn, Temple Of The King, and Smoke On The Water.

Three randomly picked Boomerocity favorites off of this collection are Too Late for Tears,Paul Morris’ keyboard solo and, of course, Burn.Any one of these performances is worth the price of the DVD, which is a steal, by the way.

This is an absolute gem for both Rainbow fans and those who follow the Rockpalast series. Black Masquerade brilliantly spotlights Rainbow and Ritchie Blackmore in all their grandeur.